Amid his widely derided meeting with Putin, Trump may have just said the smartest thing of his entire life - Canary Workers’ Co-op 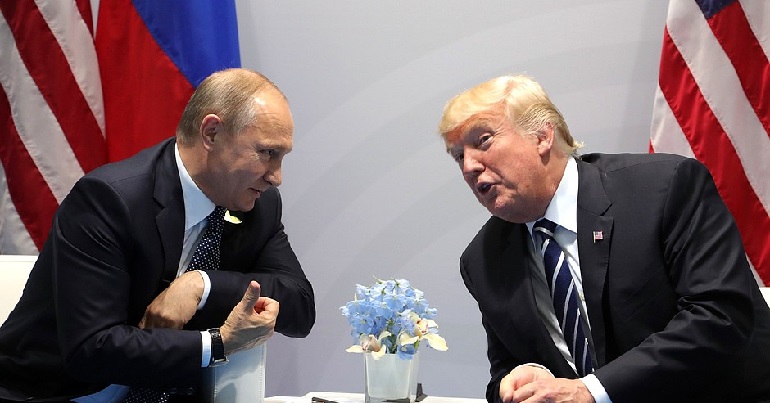 Most of Donald Trump’s remarks and accompanying tweets during his meeting with Russian President Vladimir Putin on 16 July were predictably outrageous and self-serving. But amid all of the resulting negative press, Trump may have actually said one of the smartest things that has ever come out of his mouth.

The joint summit held in Helsinki between the US president and his Russian counterpart has received an overwhelmingly negative reception from commentators and congress members from across the political spectrum. Amongst Trump’s statements during the talks was his dismissal of his own country’s intelligence community’s contention that Russian meddling took place during the 2016 election. The move was widely seen as him siding with Putin and was denounced as “treasonous” by former CIA director John Brennan. Trump said that US intelligence personnel “came to me and… they said they think it’s Russia. I have President Putin; he just said it’s not Russia.” He added:

I will say this: I don’t see any reason why it would be. I have great confidence in my intelligence people, but I will tell you that President Putin was extremely strong and powerful in his denial today.

This bootlicking – along with other comments that flagrantly breached diplomatic protocol and established standards of conduct – added to a series of bizarre tweets that Trump posted throughout the day:

Heading to Helsinki, Finland – looking forward to meeting with President Putin tomorrow. Unfortunately, no matter how well I do at the Summit, if I was given the great city of Moscow as retribution for all of the sins and evils committed by Russia…

…over the years, I would return to criticism that it wasn’t good enough – that I should have gotten Saint Petersburg in addition! Much of our news media is indeed the enemy of the people and all the Dems…

Trump’s apparent deference to Putin and disparaging of US intelligence organizations led to widespread criticism from figures from both major US political parties. Senator Chuck Schumer of the Democratic Party said: “For the president of the United States to side with President Putin against American law enforcement, American defence officials, and American intelligence agencies is thoughtless, dangerous, and weak. The president is putting himself over our country.”

Republican Senator John McCain, an ardent critic of Trump, described the meeting as “one of the most disgraceful performances by an American president in memory.” Senator Chris Murphy of the Democratic Party tweeted: “This entire trip has just been one giant middle finger from President Trump to his own country.”

But in amongst Trump’s rantings, deference to Putin, and attacks on perceived political opponents, Trump issued an unusual admission of US fault in regard to US-Russian relations.

Trump said that he held “both countries responsible” for past tensions and also that “the United States has been foolish.” He later reiterated this view on Twitter:

Our relationship with Russia has NEVER been worse thanks to many years of U.S. foolishness and stupidity and now, the Rigged Witch Hunt!

His remarks, perhaps unwittingly, represent a welcome expression of nuance on the part of a US president. And he is quite correct that the US bears a great deal of the responsibility for the breakdown in relations between the two nations.

For instance, during the Obama administration, the presence of US-led NATO troops greatly increased along the Russian border, along with a ramping up of aerial and naval surveillance activities. NATO also expanded eastwards under the presidency of George W Bush.

Although Trump’s statement was made in his characteristically crude and juvenile manner, any utterance admitting to partial US blame for the cooling of relations with Russia should be welcomed. Can anyone remember Obama, Bush, or any of Trump’s other predecessors making such a statement?

And it’s not all about NATO, either.

The US also shares some of the responsibility for Russia’s economic and social woes due to its efforts to impose neoliberalism on the country, especially during the tumultuous years following the collapse of the USSR but continuing throughout successive US administrations. As economist and Wall Street analyst Michael Hudson stated back in 2012:

Neoliberal advisors promised that Russia would become more efficient and affluent by following an almost diametrically opposite path from that which Britain, the United States, Germany, Japan and modern China took to raise themselves to industrial power – the policies that classical 19th-century liberals endorsed to reduce the power of rentiers over the economy and government. Instead, post-Soviet polarization between rich and poor over the past twenty years has seen falling living standards and a dismantling of manufacturing, education and public infrastructure go hand in hand with creation of a new class of instant billionaires at the top of a steeper economic pyramid than exists in Western industrial powers.

Hudson pointed out that this neoliberal “shock therapy” was orchestrated by major US-based economic institutions, such as the International Monetary Fund and the World Bank. At the 1990 Houston Summit, he says, neoliberal plutocrats from these organizations “were given a free hand in designing the post-Soviet economies, and they had no intention of creating a Western style mixed economy with progressive taxation and anti-monopoly regulation.”

It is unlikely that this was the basis for Trump’s condemnation of the US role in souring of relations with Russia (a better guess would probably be his apparent attraction to authoritarian strongmen around the world). But it nonetheless elicited some telling responses.

Russia attacked our democracy, murders people around the world with impunity, seized territory from a sovereign nation and shot down an airplane full of civilians. But @realDonaldTrump holds "both countries responsible." This is a national embarrassment.

(Note here, of course, that attacking other countries’ democracies, murdering people around the world, seizing territory from sovereign nations, disrespecting sovereignty generally, and attacking civilian targets are all criticisms that could equally be applied to the US.)

But for the most part, it appears that it was Trump’s implicit criticism of past US administrations’ treatment of Russia, and drawing an equivalence between the two countries’ past actions, that has drawn the ire of most congress members – especially fellow Republicans and erstwhile supporters of the Trump administration.

Republican speaker of the House Paul Ryan stated: “The president must appreciate that Russia is not our ally. There is no moral equivalence between the United States and Russia, which remains hostile to our most basic values and ideals.” Another common criticism from Trump supporters was that the move made the US and its government look weak. Republican Senator Bob Corker, for example, complained that such suggestions of equal blame “make us look like a pushover.” An unnamed former Trump administration official said: “you don’t achieve peace by bending over.”

And perhaps most tellingly of all, even usually servile Trump administration cheerleaders from the right-wing media began to distance themselves from their figurehead over the affair. Fox and Friends host Brian Kilmeade said, for example, that the tweet pointing to US “foolishness and stupidity” as a cause of deterioration in US-Russian relations was “by far the most ridiculous tweet of late, and that is insulting to past administrations.”

But for many Republicans in congress, their siding with Trump over almost any issue and their willingness to muddy the truth about Russian meddling in the 2016 election does not appear to have abated. Back in Washington, for example, Republican congress members grilled an FBI agent [paywall] who was involved in investigating said meddling during a hearing on Capitol Hill. The agent in question, Peter Strzok, is under fire for sending critical and politically charged messages about then-presidential candidate Trump to his mistress, FBI lawyer Lisa Page, while the investigation was still ongoing. And this comes despite Trump himself being a notorious philanderer and misogynist, who has boasted about sexually harassing women and has paid hush money to keep secret an affair with a pornstar. Still, Republican allies in Congress went below the belt on Strzok by concentrating on his infidelity during the investigation.

Clearly, Trump’s Republican allies are willing to overlook and defend practically any offense on the part of the president – just so long as it doesn’t call US power and dominance into question. For them, crossing that line is what is truly beyond the pale.

– See more coverage from The Canary US.

Featured image via the Kremlin/http://en.kremlin.ru