200,000 people at the Durham Miners' Gala just helped to bring a very important political prisoner into the mainstream - Canary 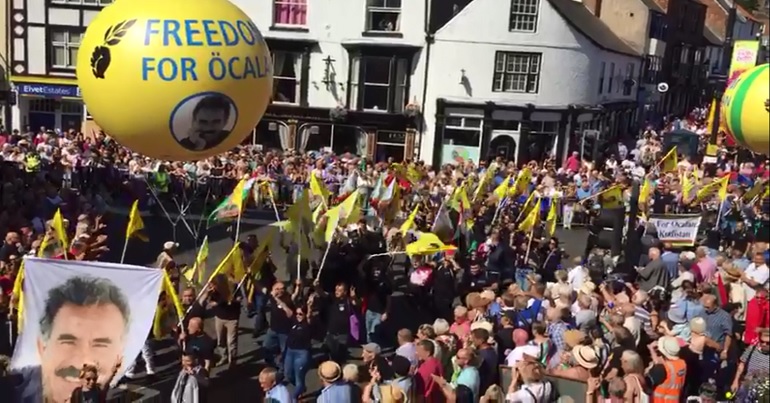 Last weekend, around 200,000 people attended the annual Durham Miners’ Gala. This year’s gala was dedicated to the campaign to free Kurdish leader and political prisoner Abdullah Öcalan, and it helped to bring the progressive movement surrounding him into the mainstream.

Öcalan is a freedom fighter who is currently imprisoned for life and kept in solitary confinement on the Turkish island prison of Imrali. He co-founded the Kurdistan Workers’ Party (PKK), which has long sought to secure rights for the Kurdish population in Turkey. And he also helped to develop the philosophy of Democratic Confederalism that has guided the PKK and related organisations for over a decade. As The Canary has reported comprehensively in recent years, this is a secular ideology encouraging direct democracy, ecology, and feminism, which can be seen in action today in northern Syria (aka Rojava).

The Durham Miners’ Gala is in its 134th official year, though celebrations date as far back as 147 years ago. The aim of the gala is to celebrate “trade union collectivism, community spirit and international solidarity”, according to the Friends of the Durham Miners’ Gala website. And it was that spirit of ‘international solidarity’ which led the gala to speak of Öcalan:

Great internationalist speech by @unitetheunion AGS ⁦Howard Beckett “We need to stand with the people of Kurdistan. It’s time for Freedom for Ocalan” #freedomforocalan #DurhamMinersGala pic.twitter.com/dQ2o1R9cAT

Solidarity with those at #DurhamMinersGala especially those marching for #freedomforocalan. Met so many amazing women in this struggle on my visit to Rojava in May. pic.twitter.com/RtC9M3BqY3

The PKK (in Turkey) and similar organisations like the Democratic Union Party (PYD), the Peoples’ Protection Units (YPG) and the Women’s Protection Units (YPJ) in Syria practise Democratic Confederalism [pdf]. This ideology rejects nationalism and the nation-state in favour of a feminist, grassroots, direct democracy that is also driven by the need for environmental sustainability. It is a form of libertarian socialism known as libertarian municipalism, as articulated by the late US social-ecologist Murray Bookchin.

How My Father’s Ideas Helped the #Kurds Create a New #Democracy by @debbiebookchin#DemocraticConfederalism#MurrayBookchin#AbdullahÖcalan#PKKhttps://t.co/V1b8goAeU0 via @nybooks

After being kidnapped from Kenya, in an international operation that involved the CIA, Israel’s Mossad, Kenyan and Greek intelligence agents, and Turkey, Öcalan was tried and convicted of offences against the Turkish state.

Turkey has fought against the PKK for decades. And as The Canary has reported previously:

There have been significant losses on both sides and, as in most conflicts, civilians were often caught in the middle. But the PKK and its allies condemn all attacks on civilians; and have reportedly never attacked Western targets. And in recent years, a peace agreement looked increasingly possible; until [Turkey’s President] Erdoğan ended the process in 2015 and began to repress his political opponents.

The PKK’s left-wing ideology includes a desire for self-governance, which centralised states like Turkey oppose. And following the lead of its NATO ally, the UK labelled the PKK a terrorist organisation in 2001 – after the imprisonment of Öcalan, after the worst of the conflict, and after the group’s shift in ideology.

Because the British state has labelled the PKK a terrorist organisation, the Durham Miners’ Gala highlighting the plight of Öcalan and the Kurdish communities that follow his ideology is truly historic.

To this day, most reporting on the activities of the Kurdish-led progressive movements in Turkey and Syria is misrepresented as a nationalist struggle for a Kurdish state. (Note that the PKK and its allies currently call for autonomy within existing states rather than an independent state.)

The gala’s support for the freedom for Öcalan campaign may very well help to change such misrepresentation.

MEP Julie Ward, a contributor to the newly released book Your Freedom and Mine: Abdullah Öcalan and the Kurdish Question in Erdoğan’s Turkey, was among the tens of thousands who attended.

As leader of the 2017 Imrali delegation I was thrilled to see #FreedomForOcalan banners & balloons #DurhamMinersGala2018 I am proud that my trade union @unitetheunion is a strong supporter of the campaign pic.twitter.com/SeWPYfpPan

Jeremy Corbyn also spoke at the gala, as he has in the past.

Jeremy Corbyn on the balcony of the County Hotel – in his #Marras shirt! #durhamminersgala pic.twitter.com/4V38cFbrNY

The #DurhamMinersGala shows the strength of our movement.

History teaches us that those at the top never conceded anything without it being demanded from those below.

That's why the trade union movement is essential to us building a country that works for the many, not the few. pic.twitter.com/oXwKQv1aKv

It may not be mainstream to talk about Kurdish rights or the Kurdish freedom movement. But thanks to the support of both politicians and the many thousands of people at the Durham Miners’ Gala, that may now be changing.

– Learn more about the Peace in Kurdistan Campaign and the Freedom for Öcalan Campaign.

– Join The Canary so we can keep reporting on issues like Rojava and Kurdish rights. And see Canary Global editor Ed Sykes’s introduction book about Rojava here.