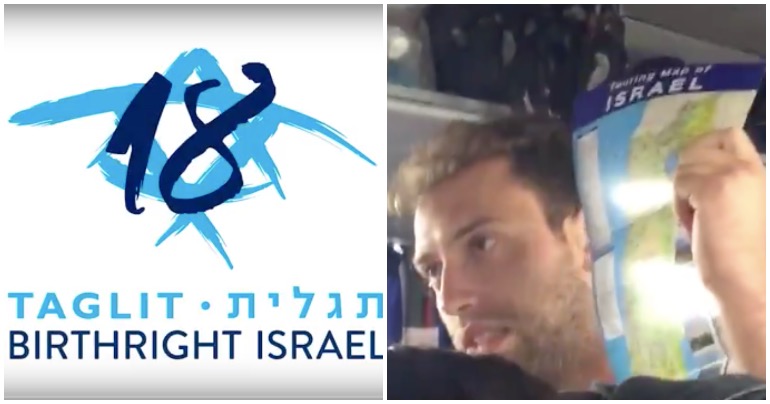 A young Jewish American has brilliantly called out an Israel tour for erasing Palestine from its maps. And he’s not the only person to criticise the group’s propaganda.

Elon Glickman was one of a group of Jewish Americans travelling to Israel as part of the ‘Birthright’ programme. Birthright Israel offers a free, ‘educational’ trip to Israel for young adults of Jewish heritage. But upon receiving a map of Israel, Glickman noticed that the map had completely erased Palestine.

The image in the map given to the young Americans didn’t acknowledge Palestinian lands. It opted instead to show them as part of Israel.

For anyone who’s curious to see the map they gave us up close. West Bank is called Judea and Samaria and Area C is called the green line. This is some 1984 shit. pic.twitter.com/jpMdRwRJ5i

In a video made viral by NowThis, Glickman said it was “inappropriate for all of us… to be shown this map as if it was the truth”.

American Jewish youth visiting Israel were given maps that erased Palestine — one traveler called it into question pic.twitter.com/3xmZlllpqT

He also questioned Birthright’s donors’ agenda in showing them this map and not talking about Israel’s occupation of Palestine. Glickman followed on by questioning the flustered tour guide as to whether they were being shown this map to enforce an agenda that “Israel is this great country that’s not enforcing a military occupation”.

The tour guide, meanwhile, asserted that the West Bank was “part of the state of Israel”. And he explained: “that’s what the Israeli government is showing you”.

Glickman left the tour, along with seven other participants on the Birthright trip, to see the devastating realities of Israeli occupation.

The participants abandoned the organised tour in order to talk to a Palestinian family in Jerusalem who are facing forced eviction by the Jewish National Fund and The Ir David Foundation. These two groups are known for forcing Palestinians from their homes in areas of religious and archaeological significance.

When asked why they abandoned the Birthright group, the courageous Americans responded by saying:

We’ve had a hard time with some of the misinformation and some of the generalisations we’ve been hearing, and this is a real opportunity and a rare one to listen and learn and take a stand against occupation.

Birthright has since refused to fly them home and threatened them with a lawsuit, leaving them stranded in Israel. The organisation condemned the eight walk-offs in its official statement, claiming its programme is for:

educational enrichment and embraces thoughtful discussions on many subjects. We will not allow this effort to be taken over by those motivated to engage in a political campaign given our commitment to providing a non-political educational experience.

The ‘non-political’ education experience is co-founded by Michael Steinhardt – who gave the middle finger to a group of protesters outside of Birthright’s annual gala. He later branded them as “left-wing, stupid young Jews”. The majority of the group’s funding, meanwhile, comes from private donors such as billionaire conservative Sheldon Adelson. Adelson has funded the campaigns of countless Republicans, including Donald Trump.

A beacon of hope

While Israeli forces continue to occupy Palestinian territory with the full backing of US and UK leaders, young courageous Jews like Glickman are the beacon of hope we so desperately need. By refusing the false narrative and helping to expose the tyranny and devastation at the cost of their safety and expense, they’re setting an example for other people to do the same.

While Palestine is being ignored, these young activists won’t be.