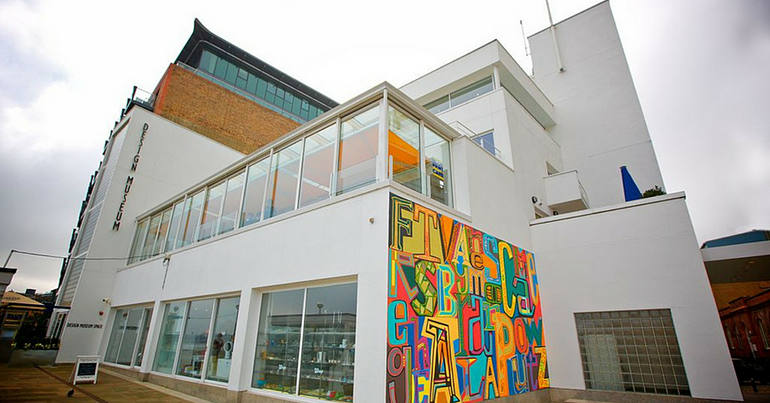 The Design Museum in London is under fire for its decision to host an evening reception for a major arms company.

On 17 July, the museum hosted a reception for Leonardo, the world’s ninth largest arms company. According to Campaign Against Arms Trade (CAAT), Leonardo (previously known as Finmeccanica) has sold weapons to countries with records of serious human rights violations. These include Algeria, Libya, and Turkey. Leonardo also has a large stake in Typhoon fighters. These planes have been sold to Saudi Arabia, a country that is currently pursuing a war against Yemen which has led to a humanitarian catastrophe.

The event was connected to the Farnborough International Airshow, a five-day arms fair and airshow held in Surrey every two years. Most major international arms companies exhibit at Farnborough. In 2016, 93 military delegations from 63 countries [pdf,p9] were in attendance.

Networking often takes place during evening receptions away from the airshow. In 2012, the Natural History Museum in London was criticised for hosting the official reception for the airshow. In 2016, the reception was held at the Science Museum and dozens of people protested outside. Even the Tower of London has hosted arms dealers.

Anti-arms trade campaigners are unimpressed by the event at the Design Museum. Andrew Smith from CAAT told the Canary:

Many of the companies in attendance at Farnborough have armed and supported human rights-abusing regimes and dictatorships across the world. Museums are public institutions and should work for the public good, not hire their space out to anyone who will pay for it. By allowing this event, the Design Museum is supporting an industry based on death and destruction.

Protest about arms companies trying to normalise their image by sponsoring public events, or using public venues, can be successful. Earlier this year, BAE Systems – the UK’s biggest arms company – dropped its sponsorship of the Great Exhibition of the North after a number of artists pulled out in protest.

The Design Museum told the Canary:

As a charity, 98% of the museum’s running costs come from admissions, retail, fundraising and event hire, such as the one hosted that night. This was a private event of which there was no endorsement by the museum. The Design Museum is committed to achieving its charitable objective to advance the education of the public in the study of all forms of design and architecture and is thus a place of debate that, by definition, welcomes a plurality of voices and commercial entities. However, we take the response to Tuesday’s event seriously and we are reviewing our due diligence policy related to commercial and fundraising activities.

Meanwhile, CAAT is continuing its campaign to persuade the museum to drop the arms trade:

Arms company Leonardo, hosted by @DesignMuseum this week, is an owner of MBDA, whose missiles are being used in attacks on civilians in #Yemen. Ask the Museum to drop the arms trade: https://t.co/QgBoKGrdfL #WarStartsHere #StopArmingSaudi

Ironically, the museum’s current exhibition is titled ‘Hope to Nope: Graphics and Politics 2008-2018’. It’s about the art of protest. And if the museum continues to welcome arms dealers, it may be seeing a lot more protest art in the future.