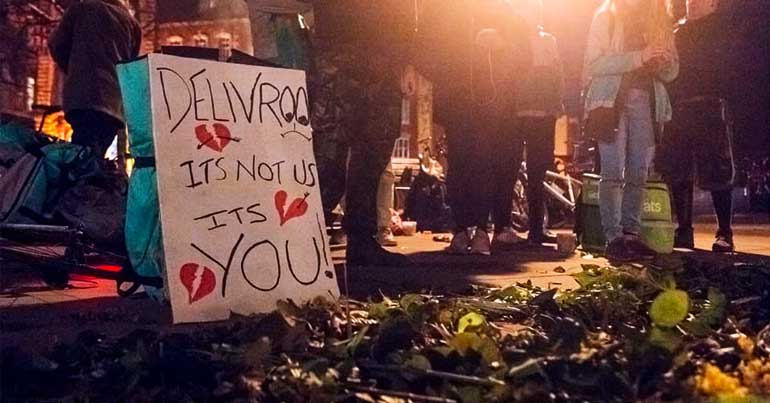 UPDATE: This article was updated at 3.33pm on 25 February to correct a quote about motorcyclists and parking fines.

Bristol Couriers Network (BCN) is a grassroots workers’ collective for people in the ‘gig economy’. It fights for the rights of people working for food delivery company Deliveroo. The Canary spoke with Liam, BCN’s secretary, about the group’s victories so far.

On 14 February, BCN held its “No Love for Deliveroo” one-hour flash strike. It was a co-ordinated action including similar collectives across the country and saw couriers refuse to pick up work in their cities. Liam told The Canary that Deliveroo’s behaviour has been BCN’s main motivation:

The pay is steadily decreasing as the distance is increasing. And there is absolutely no feedback on how this stuff is decided. There’s no transparency. We don’t get to see how the minimum fees are decided. Ultimately that’s what we’re angling for across the board: a rate of pay that is better reflective of the level of work involved, and just to know a bit more about how this stuff is being figured out.

Deliveroo had previously guaranteed a flat fee per delivery. But this changed in summer 2018 to a ‘variable distance fee’ that has led to increased costs for customers and reduced pay for couriers. Deliveroo says this model is “fairer”, although it appears unable to explain its workings publicly. Speaking to the Irish Examiner, a Cork-based representative of Deliveroo said he was “not sure” how the fee is calculated because “the algorithms do that”.

Couriers in Bristol dispute the fairness of the variable distance fee though, and have engaged in a series of strikes.

A BCN press release said more than 100 riders took part in Bristol for the Fast Food Shutdown on 4 October 2018. A similar number joined a “spontaneous strike” on 14 December. And a third strike took place on 18 January, involving around 150 couriers.

In addition to those present on the streets, many couriers also joined in ‘passively’. Liam explained these were people who weren’t working for Deliveroo at all that day but confirmed they were “supportive of strike action”. And he said this form of striking has expanded with each action.

As a result, the Valentine’s Day strike:

BCN has been positive about the strike since it happened. Speaking to Worker’s Liberty, a striking courier described the strike as a “success” that will have a “positive impact” on developing BCN. And Liam told The Canary that passers-by had been “really interested and supportive”.

BCN has already claimed victories from its actions. Bristol mayor Marvin Rees attended the 18 January strike. Liam said this led to a “big win” for BCN:

The mayor attended our strike to speak and discuss our issues. He spoke to representatives of the motorcyclists about parking and fines and promised to meet with us again to resolve the problem.

A real sticking point for the motorcyclists was that they kept getting parking tickets for parking in loading bays. The mayor attended our strike to speak and discuss our issues. He spoke to representatives of the motorcyclists about parking and fines and promised to meet with us again to resolve the problem.

The collective affiliated with the Independent Workers’ Union of Great Britain on 23 January. On the same day, it issued a list of demands. The list includes not just demands for improved pay but also for better conditions. One notable request is for “due process and adequate evidence” when terminating couriers’ contracts.

Liam explained that the collective believes in the power of its strikes:

[Deliveroo] are consistently downplaying the number of people striking. And they’re consistently fabricating stuff and saying everybody is very happy when everybody is clearly not happy. But I think all of this stuff is very telling. Some of the emails they’ve sent out have been full of spelling mistakes and that kind of thing because clearly they’ve panicked and just tried to get something out as quickly as possible. The cracks are showing a bit. Obviously they’re a super-intimidating company and that’s why they’re so hard to go up against in this kind of way. But we definitely feel confident that what we’re doing is impacting them. It’s costing them a lot of money. It’s costing them contracts. And it’s causing endless negative publicity because they are behaving so poorly.

As a result, BCN has declared a long-term commitment to struggle. Liam said the collective will “keep striking until [Deliveroo] give us what we want”.