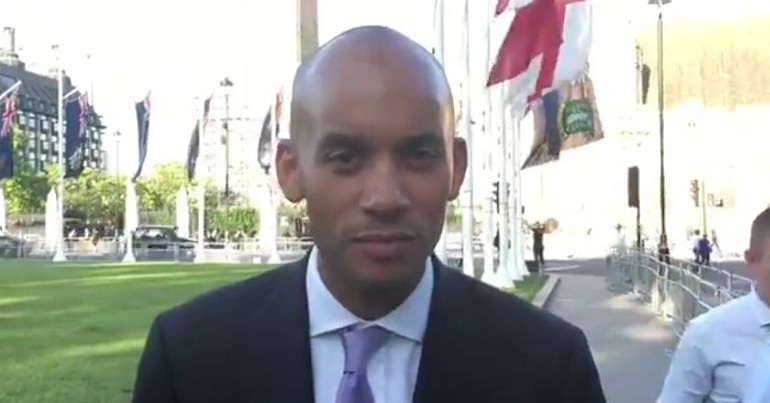 Chuka Umunna is trying to position himself as a leading figure in the newly formed Independent Group (TIG). Speaking to Sophy Ridge on Sky News, Umunna said he wants “to play the biggest role in this group” on 24 February.

But unfortunately for TIG’s self-styled No1, some really awkward footage from 2017 has emerged. And it suggests that Umunna must be either a willing self-saboteur or full of shit. Neither of which puts him in particularly good stead for a top role in TIG or his constituency.

The Labour Party saw its biggest voteshare increase since 1945 in the 2017 general election. And following that victory, as journalist Owen Jones pointed out, Umunna posted a ‘thank you’ video on Twitter:

Elections are a team effort, and so a massive thanks to my constituents, local party, and the national Labour team. I won't let you down! pic.twitter.com/xoXspy7YFu

In the video, the MP gives “Three Thank Yous”. Firstly, he thanks his constituents for giving him “the honour and privilege” to represent Streatham. Umunna continues:

Secondly, you don’t just get elected through the efforts of an individual. It’s a group effort and we had an incredible Labour team locally… [which] pulled out all the stops.

Finally, the MP thanked none other than Jeremy Corbyn, who he said led a “fantastic” national campaign. According to Umunna, Corbyn’s campaign:

presented hope, optimism, a sense that life doesn’t have to be like this.

So, Umunna explicitly acknowledges in the video that his election was a “group effort”. He expresses gratitude to both the constituency Labour Party (CLP) and the leadership for getting him back into parliament in that election. But Umunna has now quit Labour to form TIG, claiming he’s “sick and tired of politics as usual”. He’s relinquished the party machinery which, he says, enabled him to win. Isn’t that an act of self-sabotage?

Not everyone appears to think so. Some who responded to the video came to a different conclusion:

Are they really Chuka? Your opinion seems to have changed recently. I wonder why? #opportunist

‘Least genuine person in politics’ is not an easy title to win. It takes dedication, shit loads of front and a long term plan. Hats off to Chuka for making it to the top of the tree.

Others, meanwhile, pointed out that’s not the only example of Umunna’s past words jarring with his current actions:

A number of commenters on the video did, however, argue that Umunna has a right to change his mind. Of course, he does. If he’s not “the least genuine person in politics” and just no longer holds this glowing opinion of Labour, then fine. But people put him in parliament on a Labour ticket. And they too have a right to change their mind about whether they want him to represent them after his apparent change of heart.

So, regardless of his self-sabotaging, or bullshitting, credentials, this video makes one thing crystal clear: the people of Streatham deserve a byelection. Oh, and another thing. TIG would probably be wise to hold off on deciding who’s top dog for now.