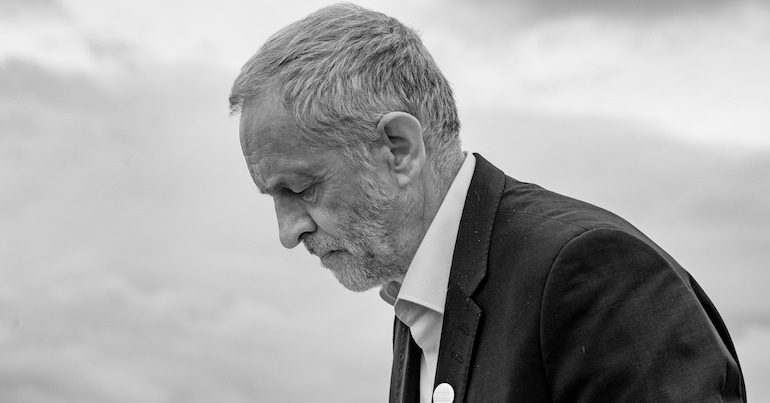 Since 18 February, 11 former Labour and Conservative MPs have quit, forming the so-called Independent Group. All the former Labour MPs openly criticised Jeremy Corbyn, claiming his leadership was a key reason for leaving. Several, including Joan Ryan and Luciana Berger, also alleged that Labour had failed to tackle antisemitism in the party. So, yet again, Corbyn’s been drawn into the ongoing row. Of course, it’s absolutely vital to challenge antisemitism whenever and wherever it exists. But as a recent Facebook post proves, criticising Corbyn isn’t the answer. Because he’s opposed this, and all other forms of racism, all his life.

On 20 February, Anna Boyle listed 40 reasons to explain how and why Corbyn has shown he’s not antisemitic. She started with his well-documented background, which had a huge impact on his political outlook.

In October 1936, Jeremy Corbyn’s mother participated in the battle of Cable Street in defence of British Jews after British fascists had staged an assault on the area. Corbyn was raised in a household passionately opposed to antisemitism in all its forms.

As Boyle also pointed out, as far back as 1977, Corbyn helped organise “a counter-demonstration” against neo-nazis in Wood Green which has “a significant Jewish population”. Before he was an MP, he played a vital role in building an “anti-racist and anti-fascist movement that did much to stop the National Front from becoming… a major political force”.

In 2016, Corbyn visited Terezin Concentration Camp in the Czech Republic. Ahead of the visit, he told the Independent, the memorial is:

a vital reminder of the genocidal crimes carried out during the Second World War and the dangers that far-right politics, antisemitism and racist scapegoating pose to society.

As Boyle explained, this was his “third visit to such a camp, all of which were largely unreported in the most read UK papers”.

In fact, as The Canary reported, Corbyn’s commitment to peace and global human rights has been internationally recognised. In 2013, he was awarded the Gandhi Foundation International Peace Award. Then in 2017, he received the Séan MacBride Peace Prize. Again, neither of these awards gained wide recognition in the mainstream media.

As Boyle also explained, Corbyn has a noteworthy track record of opposing antisemitism through parliamentary procedures too. These include:

Corbyn has also frequently stood against far-right and neo-nazi groups, especially when their action may threaten Jewish people. Boyle lists another seven examples of Corbyn’s stand against antisemitism and racism.

Six of the eight former Labour MPs who joined the Independent Group are members of the influential Labour Friends of Israel (LFI) group. Along with Berger, Ryan also claimed that a “culture of anti-Jewish racism” in the Labour Party was part of her reason for leaving. They were openly critical of Labour’s process of investigating claims of antisemitism.

Yet, as Boyle also pointed out, this process has been rigorous, thorough and fully supported by Corbyn. She listed 20 clear and accurate points to demonstrate Corbyn’s support to investigate antisemitism.

In April 2016, Corbyn launched an “inquiry into the prevalence of antisemitism in the Labour Party”. This followed high profile suspensions of Naz Shah and former London Mayor Ken Livingstone.

As Boyle details meticulously, Corbyn has fully backed and implemented every recommendation of Shami Chakrabarti’s 2016 report.

Since then, Corbyn’s also supported all steps taken by Labour to investigate and eradicate antisemitism from the party. This includes backing a motion at the 2017 Labour conference and asking Jennie Formby to investigate antisemitism as her “first priority” as soon as she was appointed general secretary to Labour’s National Executive Committee (NEC) in 2018. As Boyle also explained:

Labour almost doubled the size of its staff team handling investigations and dispute processes… Since 2018, every complaint made about antisemitism is allocated its own independent specialist barrister.

Within six months, Formby cleared the “entire backlog” of outstanding cases and Labour more than “doubled” its “senior disciplinary panel – from 11 to 25 members” to speed up investigations. Corbyn backed all of these moves.

An ongoing factor in this issue is skewed mainstream media reporting and clear media bias against Corbyn. As The Canary reported, academic research from the Media Reform Coalition (MRC) revealed that media coverage of antisemitism in the Labour Party was ‘misleading’, ‘distorted’ and ‘inaccurate’. In a damning report, the MRC said….: “we identified myriad inaccuracies and distortions in online and television news”. Boyle also referred to this research, pointing out that the MRC report “found ninety-five serious reporting failures”.

As Boyle noted, although Corbyn has supported every move to investigate antisemitism, decisions rely on members of Labour’s Governance and Legal Unit. “This independence”, she explained, means those decisions are “free from political influence”. This is a fact Berger, Ryan &Co. seem conveniently to ignore as they continue to criticise Corbyn with back-up from Labour deputy leader Tom Watson. Yet the mainstream media barely reported that Labour MP Margaret Hodge submitted 200 complaints relating to antisemitism, involving 111 individuals. It’s now emerged that 91 of these people “turned out not to be [Labour] members”. So Hodge, an MP who also continues to criticise Corbyn, was described as “one of those most responsible for false and exaggerated claims” about antisemitism in Labour.

There is absolutely no doubt that antisemitism has no place in the Labour Party, or indeed anywhere in 2019. It’s quite right to investigate and challenge it wherever exists. But blaming Corbyn is quite simply wrong.