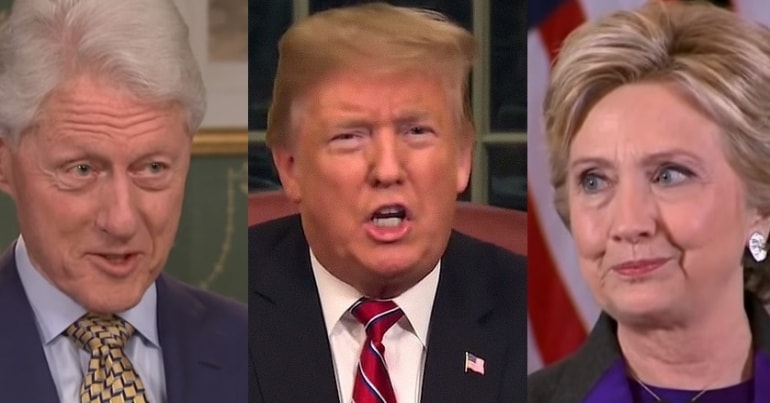 Former US president Bill Clinton and former secretary of state Hillary Clinton have just publicly intervened in the crisis surrounding Venezuela. The problem is – both Clintons have a long history of backing coups and brutal sanctions. And people really aren’t buying into their rhetoric.

I urge Nicolás Maduro to allow humanitarian aid inside Venezuela’s borders peacefully. People are in need of life-saving medicines, children are subsisting on one meal a day, and a peaceful delivery of food and supplies is to the benefit of all.

Bill then went even further:

The heartbreaking violence in Venezuela must stop. I stand with President @JGuaido, the National Assembly, and the people of #Venezuela as they embrace their right to live in peace, choose their leaders, and decide their future, in harmony with their neighbors.

As readers of The Canary will know, the Venezuelan government has actually been both requesting and accepting aid:

They ARE accepting aid…just not yours thanks.

Maduro is receiving aid from govts not trying to overthrow him. How can anyone believe war criminals Trump, Bolton & Abrams (who hid weapons in aid shipments before) are acting in good faith to deliver “food & medicine” their sanctions have blocked for years? #HandsOffVenezuela

Observers did not miss the irony of the situation:

I urge Resistance leaders to act like an actual Resistance, not co-sign a PR stunt for the latest US regime change effort (which this leader backs by definition). I also urge those who claim to care about Venezuelans to join the UN & urge the US to end its crippling sanctions: https://t.co/7PCCcN5jDY

Furthermore, both the Red Cross and the UN have blasted Washington’s ‘politicisation’ of aid.

The Red Cross, meanwhile, has slammed “people not affiliated” with it for falsely using Red Cross clothing:

We’ve learned that there are some people not affiliated w/ @cruzrojacol & @CruzRojaVe wearing Red Cross emblems at Colombia-#Venezuela & Brazil-Ven border.
We urge them to stop doing this. They might mean well but they risk jeopardizing our neutrality, impartiality & independence

The International Red Cross condemns yet another deception by the Venezuelan opposition https://t.co/3NhQfGjtTP

Cutting through the propaganda

We debunk blatant lies spread by CNN and other corporate media outlets, who falsely claim Venezuelans don't have access to food and basic supplieshttps://t.co/daeyGoX1z8

Venezuelans have every reason to be wary of aid coming from the US. Trump even appointed alleged war criminal Elliott Abrams as his Venezuela liaison. This is the man who used ‘humanitarian aid’ to ship weapons to far-right death squads in Latin America in the 1980s.

A former adviser to late Venezuelan president Hugo Chávez (who hasn’t been afraid to criticise current president Nicolás Maduro where appropriate) laid out the true intent behind the US ‘aid’ stunt:

At least everything is out in the open now. Venezuelan opposition leader Juan Guaido is essentially calling for a military intervention to remove Maduro after today’s ‘humanitarian’ mission failed. This is what they have wanted all along since they can’t win power via elections. https://t.co/3JFPMv737B

A history of supporting sanctions

Bill Clinton and former UK prime minister Tony Blair pushed what former UN official Denis Halliday referred to as ‘genocidal sanctions’ against Iraq during the 1990s. The sanctions reportedly killed a million Iraqis – half of them children under the age of five.

The US has also been imposing crippling sanctions on Venezuela. But neither of the Clintons mentioned these sanctions in their statements of support for ‘the people of Venezuela’.

In 2009, meanwhile, the left-leaning democratically elected president of Honduras, Manuel Zelaya, was removed in a military coup. Hillary Clinton backed the coup. She said in her autobiography:

We strategized on a plan to restore order in Honduras [after the coup] and ensure that free and fair elections could be held quickly and legitimately, which would render the question of Zelaya moot.

As The Canary previously reported, extreme poverty and unemployment in Honduras increased dramatically after the US-backed coup. And many child refugees found their way across the US border.

In 2014, CNN journalist Christiane Amanpour asked Clinton what should be done with child refugees coming from Latin America. The latter replied:

we have to send a clear message, just because your child gets across the border, that doesn’t mean the child gets to stay. So, we don’t want to send a message that is contrary to our laws or will encourage more children to make that dangerous journey.

you literally oversaw a coup in latin america as sos. venezuela does not need us aid; they need sanctions lifted, access to their own resources, and respect for their sovereignty.

And then there was Libya, of course.

Hillary wants to save Venezuela in the same way she did with Libya.. 😏https://t.co/Qc3M5HB1Md

👆🏾 This “private citizen” needs to retire from US foreign policy business and just let Iraq, Libya, Syria and Honduras be her crowning legacy.

Many on the left have come to expect hypocrisy and support for US imperialism from the Clintons, of course. But unfortunately, even self-proclaimed ‘democratic socialist’ Bernie Sanders has essentially been parroting the Trump regime’s propaganda.

The ‘resistance’ to Trump clearly has its limits. And the main red line seems to be standing firmly against US imperialism.

The world deserves so much better.