In the midst of Brexit, a new movement calls for 'Irish Unity' - The Canary 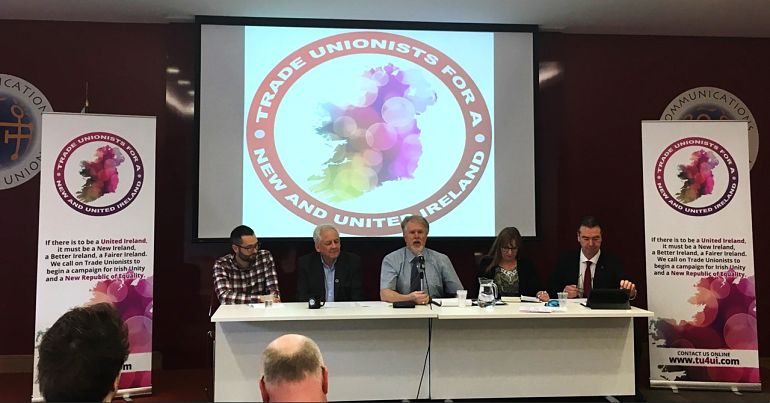 A new organisation has formed to call for a united Ireland. The group is called Trade Unionists for a New and United Ireland (TUNUI). Its Dublin launch took place on 25 February. On its website it asks for “trade unionists across Ireland to begin engaging in the debate for Irish unity”. It says:

In the past both states on either side of the border allowed conservative interests to shape public policy and practice.

TUNUI argues that in a united Ireland the rights of workers, and human rights in general, must be “front and centre in a new all Ireland constitution”. Inequality and racism have become “embedded” in the policies of both governments on the island of Ireland, it says. To counter this, it intends “to utilize the debate for Irish Unity”.

In a press release [PDF], the organisation says, “the partition of Ireland has been disastrous for workers’ rights and progressive politics in this country”. It also states:

In the north, average wages are lower than anywhere else in Ireland or the UK.

Workers in the north of Ireland, the group claims, also suffer under “draconian anti-union laws” that the Tories introduced. In the Republic, it says, “workers are still denied the basic right to collective bargaining”.

Speaking on 25 February to Newstalk Breakfast, Ruairí Creaney of TUNUI said trade unionists must ‘engage’ with the idea of Irish reunification. If they don’t, he added, workers’ rights will suffer because business interests will dominate discussions of reunification.

We want to articulate our own vision of Ireland. We want a new Ireland. An Ireland based on equality, and ultimately, a socialist Ireland.

During the same interview, Creaney also spoke about Brexit. He pointed out that TUNUI believes, “the solution [to Brexit] is the reunification of our country”. The group’s launch comes as Theresa May says she has postponed the final Brexit vote.

TUNUI also announced it will hold a conference on the topic of Irish reunification later this year. The conference is due to take place on 27 April in Dublin.