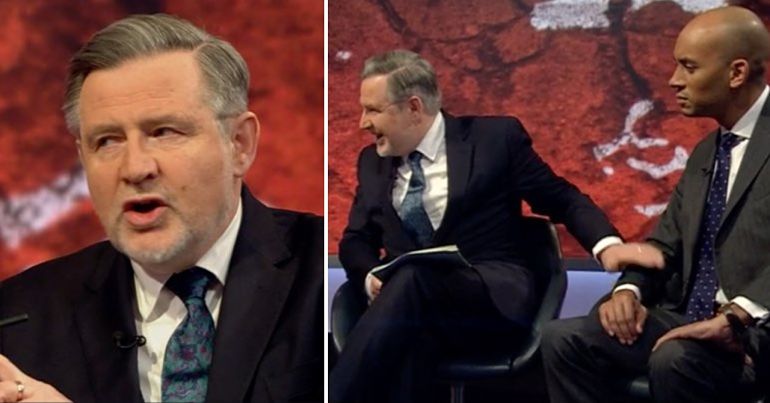 Labour has announced support for a second referendum – should certain conditions be met. And it didn’t take long for the media to spin it as a victory for the new Independent Group against Corbyn.

But Labour’s Barry Gardiner gave a spirited defence on BBC Newsnight. He put the media straight on Labour’s long-held Brexit strategy. And he also included the added bonus of unsettling Chuka Umunna by touching his expensive suit.

Gardiner to the media: “Don’t give me that!”

Labour has suffered criticism for not supporting a second referendum on Brexit. But now it’s likely to do so, the media still find fault and spin it as a defeat.

Newsnight host Emily Maitlis pointed to Umunna and said to Gardiner: “It was this lot that scared you”. Many of the so-called TIGs, after all, claimed they resigned over Labour’s Brexit approach. The suggestion was that Labour changed policy out of fear of losing more MPs.

But Gardiner didn’t hesitate to put both Maitlis and Umunna in their places on this:

“If you look at what happened at our party conference, we laid out all of this systematically”

Maitlis then used Labour’s Brexit announcement to suggest there was an internal party conflict. She also implied the decision was made despite Corbyn’s resistance – all without evidence.

Gardiner was quick to call her out on this. And he also reminded her that Labour has a long held conference position on a second referendum since September 2018. This suggests its Brexit stance wasn’t forced, but had always been planned:

@BarryGardiner was great on Newsnight last night. Despite the BBCs best attempts to spin it as internal Labour conflict and Corbyn being a roadblock to a 2nd referendum. pic.twitter.com/PMtG3IaHVu

Gardiner acknowledged that he still held some deep concerns about a second referendum:

Labour’s position on a second referendum hasn’t changed, if the media paid attention

As Gardiner highlighted, the Labour Party never ruled out supporting a second referendum on Brexit. A motion passed by Labour members at the party conference in 2018 stated that if Labour couldn’t get a general election, all options were “on the table”, including a public vote.

As musician Billy Bragg pointed out:

Barry Gardiner explains why today’s developments are simply Labour doing what it always said it would. https://t.co/pQ8BgQPlHS

Since its conference, Labour has failed to win a vote of no-confidence in the government. And so a general election has not happened.

Also, Labour’s preferred soft Brexit deal could struggle to get through parliament. This is because it includes a customs union and close alignment with the EU single market. This is opposed by many people who feel this would not deliver a true Brexit.

Labour also feels May’s deal breaks its so-called ‘tests’ on things such as workers rights. And it is unlikely a Labour amendment to May’s deal, to ensure these tests are satisfied, would pass in parliament.

Because all the above options have been exhausted, or are unacceptable to it, Labour was always likely to be left with no choice but to back a second referendum. This is the option of last resort to avoid a damaging Tory Brexit in any form.

I've seen some nonsense that I "misspoke" earlier on a public vote. Pretty hard to misspeak identically in 10 interviews, but for clarity: if Theresa May won't accept our deal, then the public must decide: do we accept whatever deal she gets through, or do we Remain? Got it?

There was a revealing moment during the Newsnight exchange when Gardiner put his hand on Umunna’s suit. As a former Newsnight employee pointed out, Umunna seemed less than impressed:

Umunna is known for his love of expensive suits and not wishing to hang out with “trash”. His personal tailor once wrote a blog on Umunna, describing him as her “most stylish man of the month”. In it, he was further described as:

a gentleman who shows exceptional style and wears tailored suits with effortless grace.

She described how she dressed Umunna for his, “achingly classy church wedding”. And Umunna was reported to be a guy who “oozes a cool demeanour” and who is:

a style role model whose smartly tailored wardrobe shows pride and respect for himself, his constituency and his country.

Aside from being protective of his suits, Umunna also possibly dislikes Gardiner for saying on Sophy Ridge on Sunday that the Streatham MP may have left Labour because he knew he’d never become party leader:

Suits are the least of Umunna’s worries

Predictably, the media are ignoring the fact that a second referendum under such circumstances has always been Labour policy. Instead, they are spinning it as a dramatic U-turn against the resistance of Jeremy Corbyn. And also as a victory for Labour quitters in the Independent Group.

But the reality is that Labour has now stolen from the independents their main weapon: a second referendum. And as they don’t seem to have any other policies to campaign on, it looks like Umunna & Co might need to look beyond careers in politics to fund their suits in the near future.