Waffle and no policies. The Independents prove on Marr they’re the David Brent of politics. - Canary 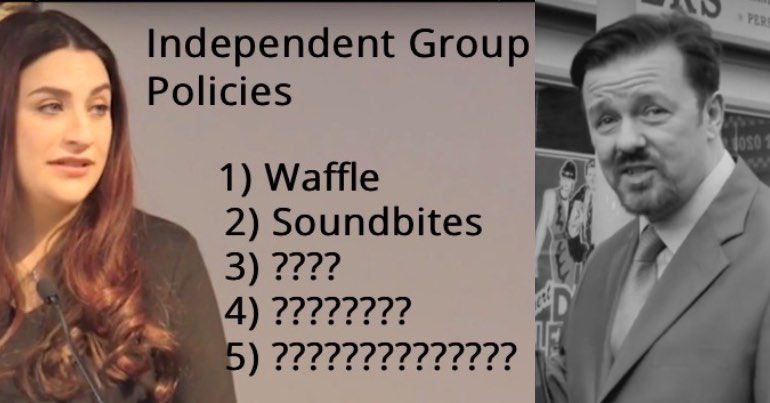 There isn’t much to laugh about in politics at the moment. But thankfully the new Independent Group of Labour losers and Tory turncoats are providing us with plenty of gags.

What could be funnier than a new group of politicians who want to be taken seriously but have no policies? And this was brutally exposed again on The Andrew Marr Show on 24 February.

What do you actually stand for?

Ok, what does this new group actually stand for?

You can watch their answers in full below:

What does the Independent Group actually stand for? #Marr talks to the former Labour MP, Luciana Berger, and the former Conservative MP, Heidi Allen, about nationalisation, tuition fees and taxation https://t.co/CZKpssvmUh pic.twitter.com/lNGm0vrzjB

Their answers gave new meaning to ambiguity and waffle. Marr asked Allen about renationalising the water and the railways, “yes or no?”. She responded:

My gut instinct is no, but like all of these things it needs to be built on evidence. And actually – rather than just choosing ideological solutions, what will work and what can we learn from other countries.

Before you carry on, I mean I just say that we are 6 days in. And we’ve taken the step to leave our parties. We haven’t even had our inaugural meeting…and actually, but for all of these policy decisions, the idea that you’re asking me through the prism of the ‘old politics’ and what we’re seeking to do is actually do this in a very very different way. We’re not going to… we’re going to listen to the country.

So apparently the old ‘prism’ of politics is bad because it demands small things like actual policies. Talk about setting a low bar.

Berger then added this, as though it clarified matters:

I point people to, I guess what binds us together, which, which, you know, the platform that we’ve come together on at the moment is our values… And we’ve got a website called theindependent.group which people can look at.

It is worth noting that the Labour Party and others also have websites. These websites also have the added benefit of including policies and manifestos.

Many observing this performance couldn’t help but notice a resemblance to someone else. Not Martin Luther King, John F Kennedy or Malcolm X, but the character David Brent from The Office.

Ealing Labour for Corbyn on Twitter made this edit illustrating the comparison:

"You're not looking at the whole pie, Andrew!"

Has anyone seen David Brent and the Independent Group in a room at the same time? pic.twitter.com/legD8R8QuX

And not wanting to leave him out, they had one for Chuka Umunna too:

"Nothing changes by staying the same…. quite literally"

Not to be outdone by his colleagues, Chuka gets in on the David Brent impersonation act… pic.twitter.com/Daluz4KJ1p

The Guardian journalist, Owen Jones, also picked up on the Brentisms:

Jones also gave short shrift to a fellow journalist sympathetic to the independents:

Thank god we’re getting rid of the old politics of “having elections” and “having policies” and embracing the new politics of “voting to prop up the Tory Brexiteers” and “using David Brent-style management speak instead of offering policies which we know everyone will hate”!

Waffle and vague language is very much the ‘old politics’

Despite having the benefit of a sympathetic media that seems to share its politics, the Independent Group’s hollowness on policy is being exposed. Having a website and claiming to have ‘values’ is marvellous. But it will give little hope to people around the country without economic power who are currently fighting for survival in an unequal system. And it provides no concrete policy solutions to address climate change, rampant inequality, or any other issue for that matter.