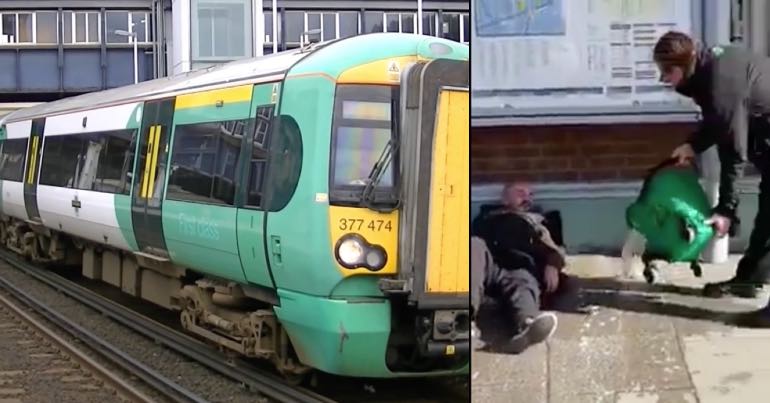 There a few things lower than throwing dirty water on a homeless person. And yet that’s exactly what Southern Rail staff were filmed doing in Sutton on 24 February.

A disgusting act of inhumanity

Staff can be seen pouring dirty water around the man and his possessions on the platform:

This is appalling behaviour by @SouthernRailUK staff towards a homeless man. The woman who posted this on Facebook said that just before she started filming the staff had whacked him with a mop. They then started harassing her for filming what they were doing. pic.twitter.com/0dp3ihhAy3

A voice off-camera can be heard saying to the person filming: “Why are you filming it? You don’t need to film it”. They add “there’s no story”.

A spokesperson for homelessness charity Sutton Night Watch later told the Huffington Post that the homeless person filmed “is diabetic” and “uses its soup kitchens”. A member of the same charity told the Evening Standard that:

I’ve been working with the homeless for three years and I’ve never seen anything like this before.

In modern day Britain, we cannot condone treating people this way. Those experiencing any kind of homelessness should be supported rather than degraded and isolated. We are therefore glad to hear Southern Rail investigating this occurrence. 1/3https://t.co/MJdudRssAB

The Labour-supporting campaign group, Momentum, also made its feelings known:

If people could retweet this perhaps @SouthernRailUK will do something about this. Twitter we can support this homeless man who has been abused and assaulted by Southern Rail's employees. https://t.co/g6BVhSdqES

Employees suspended and an investigation launched

The Evening Standard reported that communities secretary James Brokenshire is “demanding a ‘full investigation'” by Southern Rail. And in a statement to The Canary Southern Rail’s passenger services director, Angie Doll, said:

We take this incident extremely seriously and have started an investigation. The two staff members seen in the video have been suspended. We would like to apologise to the homeless man and we are trying to make contact with him to offer help and support.

Southern Rail’s popularity is already low. And this latest incident is another public relations nightmare for the company. It adds to a long list of grievances. These also include an unreliable service and timetable fiascos. Not to mention their treatment of staff and being part of a wider system of high fares.

But the broader question remains: what kind of thinking led these staff to act as they did? In a country where the media spends miles of column inches demonising poor and vulnerable people, such incidents are perhaps predictable.