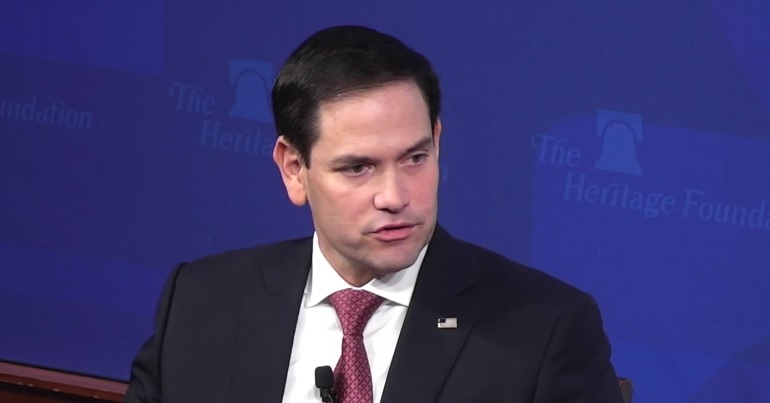 US senator Marco Rubio is behaving like a rabid dog over Venezuela. The so-called “follower of Christ” whipped himself up into a frenzy about Washington’s attempt to force its ‘aid’ on the country on 23 February. The attempt to ram trucks across Venezuela’s border – while hurling molotov cocktails – ultimately failed. So now, Rubio is threatening Venezuelan president Nicolás Maduro with sodomisation and murder.

Even a cursory glance at Rubio’s donation receipts helps explain his fervour, though. Because the US wants to topple the country’s current leader to get hold of the country’s vast oil reserves – as national security adviser John Bolton has admitted. And Rubio stacked up over $1m in donations from the oil and gas industry between 2009 and 2018.

The US political system is corrupt. As former US president Jimmy Carter (who monitors elections around the world through his Carter Centre) said, the US has “one of the worst” electoral systems. Because corporations can make huge donations to politicians’ campaigns, directly or through Super PACs. These are political ‘committees’ that can raise unlimited amounts of money from individuals, corporations and unions to plow into supporting political candidates and representatives. By contrast, Carter has asserted that:

I would say the election process in Venezuela is the best in the world.

Rubio is a prime example of how this corruption works. As research group Open Secrets documents, the oil and gas industry handed the Florida senator $1,147,980 in donations between 2009 and 2018. Overall, the ‘energy and natural resources’ sector gave Rubio $2,012,889 during that period. Individuals in the sector contributed $1,518,923, and $493,966 came through PACs.

Aside from a few exceptions, most US politicians argue that these donations don’t affect their decisions. But the evidence speaks for itself. Here we have a senator receiving tons of donations from the dirty energy industry. And what do you know? That very senator is falling over himself to topple Maduro; an outcome that’s the industry’s wet dream.

Thankfully, a number of people are calling Rubio and the US out on their corrupt scheming. The Red Cross, for example, refused to participate in Washington’s stunt on 23 February, which it said was “not humanitarian aid”. The UN also fired a warning shot at the US earlier in the month, saying:

Humanitarian action needs to be independent of political, military or other objectives

Meanwhile, a petition is circulating that calls for Rubio to resign over promoting violence against Maduro. And he absolutely should go. Because he’s nothing more than a fanatical, corporate shill. It’s bad enough that the US has to suffer him. No one should wish him on Venezuela too.

Featured image via The Heritage Foundation/YouTube