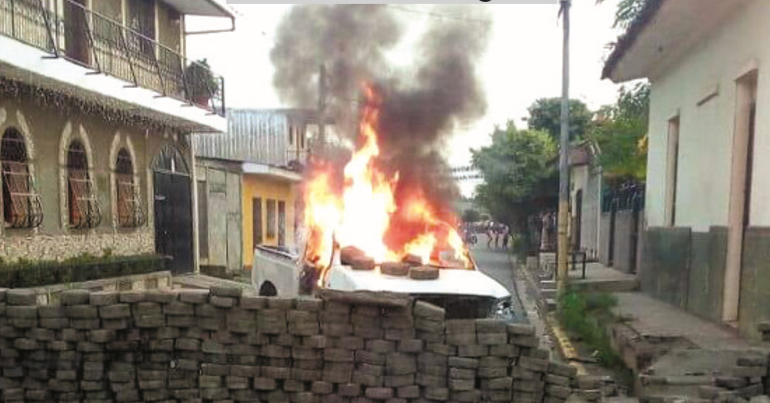 The US-based Alliance for Global Justice (AGJ) and UK-based Nicaragua Solidarity Campaign Action Group (NSCAG) have produced a detailed response to two Amnesty International (AI) reports about violent protests in Nicaragua from April 2018 to July 2018. The Canary received an advanced copy of the report – Dismissing the Truth: Why Amnesty International is wrong about Nicaragua – and it’s damning reading.

According to AI, [a] largely peaceful protest about a specific issue – social security reform – provoked a gross over-reaction by the government, in which it used massive force against protesters who were law-abiding or had very limited weaponry, which they used solely in defense.

One quote that the authors highlight is from AI’s Americas director Erika Guevara-Rosas, which was cited by Reuters:

President Ortega has shown time and again that he will stop at nothing to crush all those who dare to oppose his government and anyone unfortunate enough to get in the way.

Any abuses of power, of course, need to be called out. But the AGJ-NSCAG report criticises what it perceives as a lack of appropriate context and weak research in general from Amnesty.

A significant lack of context

The AGJ-NSCAG report counters with plenty of photographic and video evidence to support their version that:

The physical and economic damage and the disruption to normal life were immense. None of this is reflected in AI’s assessment.

There were hundreds of roadblocks, by some accounts thousands, throughout the country. La Prensa, a powerful right-wing newspaper in Nicaragua that supported the protests (as it once supported the US-backed Contra terrorists), reported at one point that 70% of roads were blocked.

Important questions are raised. For example, can protesters sustain this level of disruption for so long without being well-armed; or without posing a serious threat to the police or anyone ‘unfortunate enough to get in the way’?

In the US, an Occupy Wall Street march that blocked traffic for a few hours led to 700 arrests. The Occupy camps themselves – which did not strangle cities economically and did not involve protesters killing any police or bystanders – were eventually taken down by force. The excuse was basically that they were too dirty. How well armed would you have to be to maintain hundreds of roadblocks for months in London, New York, or Paris?

The AGJ-NSCAG report skewers AI’s largely one-sided account by diving into very specific cases: the dismantling of roadblocks in the city of Masaya; the killing of a police officer by sniper fire that AI (through superficial research) attributed to his fellow police; and cases of alleged “extrajudicial execution” or “arbitrary detention” claimed by AI that were either false or very dubious. The report also includes a case study in a region of Nicaragua where the authors were able to talk to witnesses and review events very minutely. It found that about “half the deaths reported as linked to the protests in this region had other causes, and of the protest-linked deaths, all but one resulted from opposition violence”.

According to the report, Amnesty also relied heavily on local human rights groups that were basically the NGO equivalents of La Prensa.

The forward to the report was written by Camilo Mejia, a former Amnesty International Prisoner of Conscience. He wrote that:

the real tragedy is not that we may no longer trust AI or others to tell us the truth, but that we have ceded our own agency, our own ability to question dominant narratives, and have chosen instead to blindly trust what powerful entities tell us.