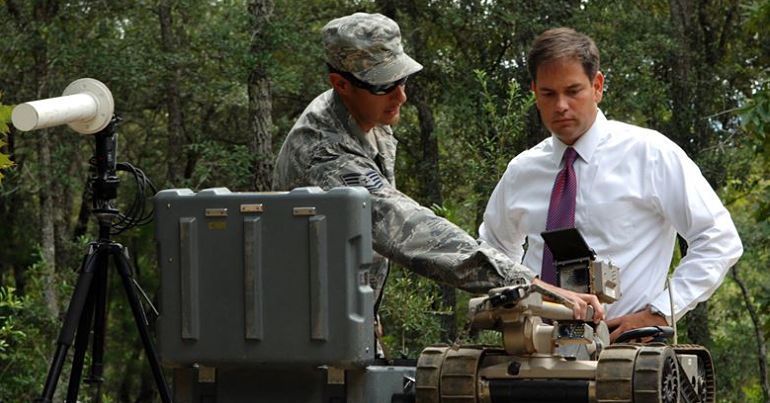 On 24 February, US senator Marco Rubio stepped his mobster mentality up a gear. He appeared to openly threaten Venezuelan president Nicolás Maduro with the death and destruction that the West brought to Libya and its former leader Muammar Gaddafi:

A rebel group captured Gaddafi on the outskirts of the Libyan city of Sirte in 2011, and one of them sodomised him with a bayonet. After Western intervention, Libya became a slave market and site of human-organ trading.

While Rubio’s threat is truly thuggish, it isn’t the first threat that the US – or Rubio – has issued to Maduro. The White House recently compared Maduro to Iraqi leader Saddam Hussein, and US secretary of state Mike Pompeo said on 23 February that his “days are numbered”.

Rubio and US military intervention

Rubio seems to be looking for any excuse to justify US military intervention in Venezuela. On 23 February, Rubio claimed:

They will soon realize just how badly they overplayed their hand today.

The whole world, however, didn’t actually see Venezuelan security forces “set fire to 3 trucks carrying food & other humanitarian aid”. As the Grayzone reported, “all available evidence points in the opposite direction”. As US ‘humanitarian aid‘ trucks tried to cross into Venezuelan territory (a clear symbolic act designed to provoke Maduro into a reaction), it appears likely that masked individuals on the Colombian side of the border threw Molotov cocktails, setting fire to the US ‘aid’ trucks.

But this evidence didn’t stop Rubio, salivating for war, from drawing his own conclusions.

Some are calling on Rubio to resign after he called for, in the words of Mike Prysner of The Empire Files, “the lynching of the democratically-elected President of Venezuela”.

The response from the US political establishment to Rubio’s threat and continuing attempts to influence the politics of a foreign nation has nonetheless been one of general silence. (We should recall Hillary Clinton’s comments after Gadaffi was killed: “We came, we saw, he died”.) And this is altogether more hypocritical given that much of the Republican Party, including Donald Trump, recently called on Ilhan Omar to resign after the congress member accurately described the influence of Israel lobby group AIPAC on US politics.

The US is a gangster state hiding behind one of the greatest PR campaigns in the history of humanity. If we can find something positive in Rubio’s threats, it is that nobody – including the BBC and the Guardian – can continue to pretend that US intervention in Venezuela is ‘humanitarian’.