BBC correspondent claims ‘we don’t do propaganda’ on Venezuela. Let's look at its coverage. | The Canary 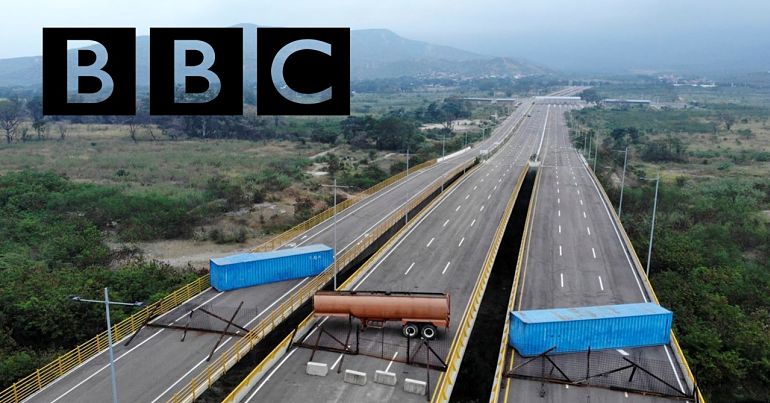 The greatest trick the BBC ever pulled was to convince the world its bias doesn’t exist. Whether BBC journalists are aware of it or not, personal and institutional bias informs what information they present, and how they present it. And as Noam Chomsky told the BBC’s Andrew Marr in 1996, if BBC reporters presented information any other way, they simply wouldn’t be BBC reporters.

On 19 February, BBC correspondent Orla Guerin added to the neutrality myth, writing about the broadcaster’s coverage of Venezuela:

We don’t do propaganda. We call it they [sic] way we see it, even if that does not suit the pre-conceived idea/ideals that some have.

BBC journalists may very well ‘call it the way they see it’. But that far from suggests that they “don’t do propaganda”. The BBC’s decades-long agitation for intervention in Venezuela lays this assertion bare.

Propaganda: a war of attrition

Though both are demonstrably false, the media drip-feeds these narratives into public discourse until they seem like common sense. Like a war of attrition, this propaganda eats away at rational discourse until critical analysis appears an act of madness or evil.

The Canary spoke to David Edwards, one of two editors of award-winning media monitoring site Media Lens, about how the BBC reports on Western intervention. Edwards said:

The BBC is structurally, institutionally completely incapable of reporting honestly the crimes of the West and its allies.

It has never told even a fraction of the truth about US-UK crimes in Serbia, Afghanistan, Iraq, Iran, Libya, Palestine, Syria, Yemen, and so on. It has never reported these crimes or placed them in an accurate historical context, showing how the West has consistently attacked independent nationalists abroad in its determination to ensure that local tyrants armed and supported by ‘us’ suppress local people to the benefit of Western corporate interests. This framework of understanding is considered completely beyond the pale in ‘polite’ BBC discourse; it is not even thinkable for them.

Because the US, UK and its allies are the world’s leading human rights violators, and because the BBC cannot even conceive of this possibility, BBC output must be considered propaganda on every issue relating to international affairs.

And true to form, the BBC has consistently made current intervention in Venezuela seem necessary and humanitarian.

The BBC versus Hugo Chávez

According to a study by the University of the West of England, out of 304 BBC reports published between 1998 and 2008, “only 3 of those articles mentioned any of the positive policies introduced by the [former Venezuelan president Hugo] Chávez administration”. These positive policies notably included “democratic initiatives, human rights legislation, food programmes, healthcare initiatives…, poverty reductions programmes”, and a highly successful literacy initiative.

One BBC article in 1999, strikingly, compared Chavez to Adolf Hitler.

When the US initiated a coup against Chavez in 2002, the BBC reported it as “Venezuela’s new dawn”. The word ‘coup’ was almost totally absent from its analysis, and the BBC’s representation of ordinary Venezuelans centred around the views of opposition forces. The coup was therefore presented as a popular and organic uprising, and not an extension of decades of US imperialism in the region.

The BBC versus Nicolás Maduro

Today, the US and its ‘coalition of the willing’ justify intervention in Venezuela by claiming that the Venezuelan government is:

Though this is perhaps the most transparent imperialist project in recent years, the BBC promotes intervention by uncritically accepting the pro-intervention narrative and omitting evidence that challenges it. In doing so, as in the lead-up to the invasion of Iraq, it is functioning as a mouthpiece for Western imperialism.

b) Authoritarian and undemocratic

The narrative that Venezuela poses a threat to US national security is probably the most incredulous of them all. Nonetheless, the BBC had a crack at it.

On 22 January, it ran a story called US ‘will respond to Venezuelan threats’. Venezuela, however, has made no threats against the US. And, as The Canary reported, “the BBC only details threats made by the US to possible… aggression from Venezuela”.

Three out of three

The BBC is, therefore, running stories promoting all three US propaganda points justifying intervention in Venezuela. Guerin’s claim that it doesn’t do ‘propaganda’ on Venezuela would be laughable if the BBC was not complicit in forming public support for what could soon become the next Vietnam or Iraq.

Featured images via Government of the United States and Flrn