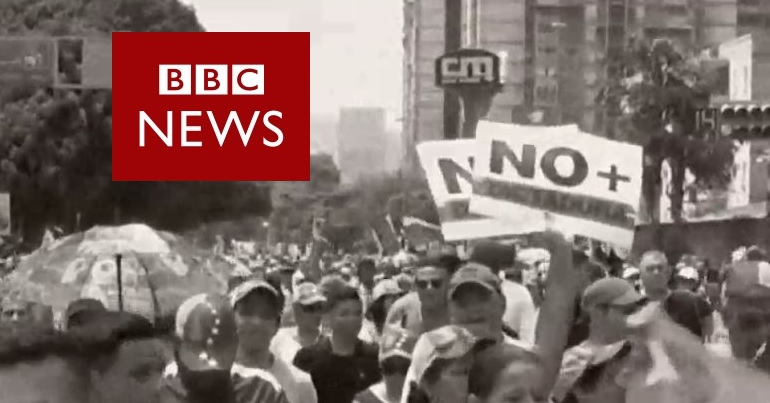 In line with the government’s agenda, Britain’s mainstream media is very busy right now trying to justify regime change in Venezuela. Not to be outdone by other outlets, the BBC has put out its most grotesque propaganda since possibly the invasion of Iraq.

On 23 January, the BBC invited its readers and viewers to “explore scenes from within one of Venezuela’s most notorious prisons”. In the accompanying interactive story, it detailed harrowing testimonies of torture and suffering of the detainees. It also documented the “corruption” that happens within. Viewers are able to effectively step inside this awful prison via the interactive graphics that appear with the narrative.

Almost immediately, however, the BBC revealed a worse, startling detail. In the first section, titled “Taken”, it quotes one of the detainees saying:

In a country like Venezuela there’s no difference between being in and out of prison. You are equally persecuted and mistreated, and you can die either way.

The message is clear: the horrors that we are reading about and experiencing in this interactive story apparently happen to Venezuelan people inside and outside of prison. This is their daily lives.

If Jeremy Hunt felt the need to offer evidence to back up his claim that the current Venezuelan leadership has “caused untold suffering to its people”, this would likely suffice.

As Media Lens pointed out, though, this a startling piece of propaganda:

This is truly outrageous from the BBC, on the front page… Blatant regime change propaganda at the public's expense https://t.co/kW6FOK3Xir pic.twitter.com/1Q8z5Vzu6Q

Not only does it fail to provide any nuance on the situation in Venezuela, instead promoting the UK government line; it also omits a crucial detail about the detainee who makes that claim.

The BBC does acknowledge that Rosmit Mantilla is an anti-government “political activist” who people elected to the country’s national assembly. But it doesn’t explain that Mantilla is 100% behind Juan Guaidó, the person who those supporting the coup in Venezuela are trying to install as the ‘legitimate’ leader. Below, for example, we can see him thanking both politicians and the media for getting behind “our new president”:

Then again, what else would we expect from the BBC? It is, after all, the outlet that produced the most “pro-war” content during the invasion of Iraq. According to a study by academics at Cardiff University, the public broadcaster’s coverage of that catastrophic aggression only mentioned casualties in 22% of its stories about the Iraqi people. It was also the least likely of all television news producers to report on the unhappiness of Iraqis with the invasion.

There’s no doubt that the desire to bring good, to bring American values to the rest of the world, and especially now to the Middle East… is now increasingly tied up with military power.

So this sort of BBC propaganda is not surprising. But it is unacceptable. Especially as we’re paying for it.