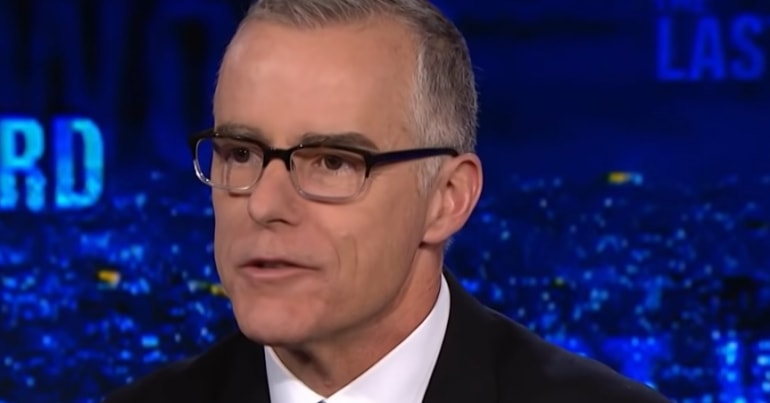 A former FBI director has just alleged that Donald Trump was talking about “war with Venezuela” back in 2017. Andrew McCabe, who made the allegations, became acting FBI director in 2017 after Trump fired then-director James Comey. US attorney general Jeff Sessions later fired McCabe in 2018, just one day before the latter’s retirement.

‘They have all the oil’

McCabe’s alarming admission occurred during a discussion about his new book. The vast majority of the discussion, on US cable news channel MSNBC, centred around FBI investigations into Trump.

But MSNBC host Lawrence O’Donnell, to his credit, referred briefly to Venezuela:

in the book in the very same [intelligence] briefing the president says to the briefer that he wants to have a war with Venezuela. And this is in 2017.

Yeah, the president’s remarks to the room were along the lines of ‘I don’t understand why we’re not looking at Venezuela. Why are we not at war with Venezuela? They have all the oil and they are right on our back door.’

Donald Trump: "I don't understand why we're not looking at Venezuela. Why we're not a war with Venezuela? They have all the oil and they're in our back door" | @TheLastWord with @Lawrence

But really, a review of the whole interview shows that, to McCabe, the most disturbing aspect of Trump is his “aberrant norm-busting behaviour”. McCabe seemed far more concerned that Trump took the word of Russian president Vladimir Putin about an alleged launch of North Korean missiles. And that is where the focus of the interview returns.

The Canary has previously reported that establishment experts admitted that the US-led sanctions on Venezuela are designed to “make the economy scream”. And a millionaire investor concluded that US policy towards Venezuela was “all about oil”.

Most recently, billionaire oligarch Richard Branson appears to have bought into the regime-change propaganda targeting Venezuela – though musician Roger Waters took him to task brilliantly over his faux humanitarianism.

The FBI is no friend of democracy, but sometimes the truth slips out

We must recognise that the FBI has a long and gruesome track record of being deceitful, violent and anti-democratic. This behaviour remains to this day.

But every now and then, a little truth slips out of the establishment.

years ago, when I first got into the FBI, one of the missions of the FBI in its counter-intelligence efforts was to try and keep [progressives and socialists] out of government

Uhhhhhhh….Fmr FBI Assistant Director just said "When I first got into the FBI one of the missions of the FBI in its counterintelligence efforts was to try to keep" progressives out of government pic.twitter.com/l1KqQMO914

So the FBI is not a trustworthy institution. But this latest revelation seems unlikely to be made up; especially given that most of the establishment that opposes Trump still supports the coup in Venezuela.