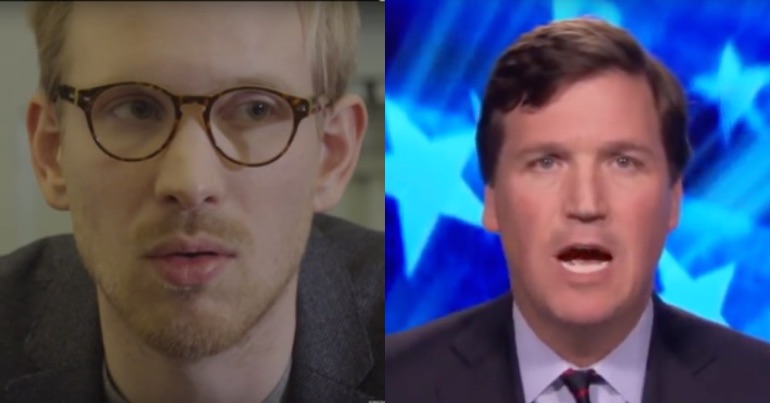 More than Fox bargained for

Bregman wrote the best-selling book Utopia for Realists, which advocates a Universal Basic Income (UBI). He was taking part in a pre-recorded segment for Fox News’s Tucker Carlson. The latter was recently involved in a racism scandal that lost many of his show’s advertisers.

Bregman was invited to discuss elite tax avoidance. But he had other ideas. And to Carlson’s dismay, he took aim at him personally and his employers:

Watch Fox News host Tucker Carlson call one of his guests a 'tiny brain…moron' during an interview. NowThis has obtained the full segment with historian Rutger Bregman that Fox News is refusing to air. pic.twitter.com/kERYPUaGLY

Bregman started by illustrating that:

the vast majority of Americans… – including Fox News viewers and including Republicans – are in favour of higher taxes on the rich… it’s all really mainstream. But no one’s saying that at Davos, just as no one’s saying it on Fox news, right? And I think the explanation for that is quite simple, is that most of the people in Davos, but also here on this channel, have been bought by the billionaire class

many people have called for higher taxes. But very few have shown…

I think the issue… is one of corruption and of people being bribed… and of not talking about the real issues… what the Murdochs basically want you to do is to scapegoat immigrants instead of talking about tax avoidance.

Carlson then asked how money influenced his coverage. Bregman answered:

it works by you taking their dirty money… You are a millionaire funded by billionaires… And I’m glad you now finally jumped [on] the bandwagon [by addressing tax avoidance] of people like Bernie Sanders and AOC [Alexandria Ocasio-Cortez], but you’re not part of the solution, Mr Carlson. You’re part of the problem, actually.

Carlson then completely lost it with a rant that seriously undermines his journalistic integrity, saying:

I wanna say to you why don’t you go fuck yourself ― you tiny brain… I tried to give you a hearing, but you were too fucking annoying.

You can’t handle the criticism, can you?

Fox didn’t realise it was being recorded

Little did Carlson know that Bregman had recorded the entire exchange:

So @TuckerCarlson just called me a ‘fucking moron’ during a prerecord for his show, for pointing out that he’s a millionaire funded by billionaires.

Let’s see if they’ll air it.

‘Did they get it on audio?? Fuck fuck fuck’ we heard them say here..

And since the recording was released, Carlson has doubled down, not apologised:

Tucker Carlson responds to a leaked interview with Rutger Bregman: "There is some profanity, and I apologize for that. On the other hand, it was genuinely heartfelt. I meant it with total sincerity." pic.twitter.com/oDQAN2c1L2

Bregman even alleges that Carlson sent him an abusive email after the show:

Okay, so now @TuckerCarlson sent me this email, after I asked him when the interview is gonna air (was supposed to be on tonight). Stay tuned. pic.twitter.com/AKaNEjm2S2

Reflecting on the incident, Bregman tweeted:

2/ I stand behind what I said, but there’s one thing I should have done better. When Carlson asked me how he’s being influenced by Big Business and tax-avoiding billionaires, I should have quoted Noam Chomsky.

3/ Years ago, when he was asked a similar question, Chomsky replied: ‘I’m sure you believe everything you’re saying. But what I’m saying is that if you believe something different, you wouldn’t be sitting where you’re sitting.’

This is the Chomsky video he is referring to with Andrew Marr:

Bregman is acknowledging that money’s control of the media isn’t achieved by direct censorship. Instead, journalists are self-censoring (knowingly or unknowingly) and are selected for holding views reflecting the interests of their employers and advertisers; and for knowing certain topics are off limits.

Guests calling out this flaw in commercial media is long overdue.