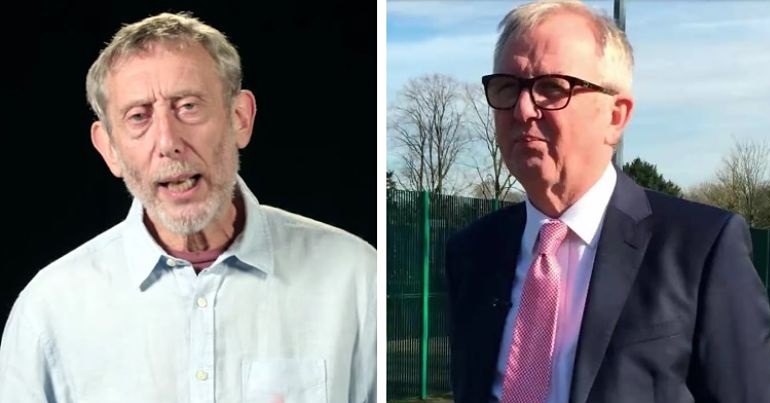 Ian Austin quit the Labour Party on 22 February although he has not yet joined the newly formed Independent Group. The Dudley North MP, who was adopted by Czech Jewish refugees, says Jeremy Corbyn’s Labour has caused “offence and distress” to Jewish people.

But Britain’s favourite children’s author, Michael Rosen, had a few choice words for Austin. In fact, the Jewish writer exposed the shitbag MP for trying to browbeat him while he was giving evidence about Holocaust education.

And that’s not the only hectoring Austin is famous for.

“You’ve had your say”

I was invited to give evidence to the HoC Education committee on Holocaust Education. Non-adversarial, fact-collecting. I started to say that we should avoid British triumphalism when talking about this to children and Ian Austin interrupted me and aggressively argued at me. https://t.co/93fZKZHZgV

So, the author was giving evidence at an inquiry into Holocaust education in the UK. And, as Rosen says, while he was talking about “British triumphalism” Austin kept interrupting him:

As the video shows, Rosen tried to explain to the committee that, as the Nazis didn’t make it to Britain, we don’t know what might have happened if they had. He appeared to be warning against teaching children that Hitler couldn’t have done in the UK what he did elsewhere because of Britain’s ‘fighting spirit’. Austin was having none of it, though. He kept patronisingly saying “I know, I know” through the Jewish author’s evidence. Eventually, Austin even said:

Hold on, you’ve had your say… The reason, professor Rosen, that they didn’t invade Britain is because Britain fought back.

So, that’s Austin. A man who tries to silence someone who’s offering his expertise on the Holocaust if it challenges the notion of Britain’s ‘greatness’. Furthermore, a man who has no bones about doing that to someone who’s Jewish.

Rosen isn’t the only person who Austin has told to shut up, though. Labour Party leader Jeremy Corbyn made a statement in parliament about the newly published Chilcot report in July 2016. During the statement, in which he heavily criticised the decision to invade Iraq, Corbyn said that “many of our people actually got it right”. He was talking about over a million people in the UK who marched against the invasion. But while Corbyn was applauding the public on doing this, Austin shouted from the backbenches:

Sit down and shut up.

Again, Austin’s attempt to silence someone came as they were challenging the notion of a magnanimous and ‘great’ British state.

Like the Insignificant Seven that left the Labour Party before him, it’s hard to see what values Austin actually shares with the party. So, aside from the parliamentary ramifications, it’s probably best for all those involved that shitbags like him do jog on.

No-one needs people like that in a party which is trying to “build a Britain we can all be proud of”.