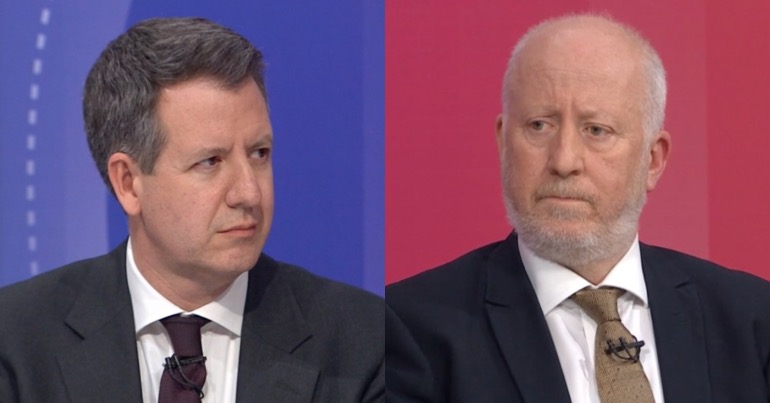 The scrutiny of Labour’s quitters and the new Independent Group is intensifying. And on 21 February’s edition of BBC Question Time (BBCQT), Chris Leslie was challenged over their refusal to call by-elections and the hypocrisy of simultaneously supporting a People’s Vote.

Challenged from the start

But this didn’t mean the panel, or the audience, went any easier on Leslie. The first question from the audience set the tone:

As ever you get our first question in advance – and tonight it is about whether the Independent Group should face a by-election. #bbcqt pic.twitter.com/T4T6SYHTdG

Even Fiona Bruce, the BBCQT chair, commented to Leslie:

You say by-elections are not the priority; we had so many questions on whether there should be a by-election.

Challenged by the panel and audience

The honest and decent thing to do is resign and hold a by-election. #bbcqt pic.twitter.com/OW9efwkRqa

Leslie gave the following justification for not calling a by-election. He even mentioned how he would like to give people a “public vote” on Brexit:

‘I believe that the Labour Party is betraying the country on the promise it made’
Former Labour MP @ChrisLeslieMP says he will not subject himself to a by-election following his departure from the Labour party earlier this week. #bbcqt pic.twitter.com/4KVsThu0sD

But not all viewers were convinced by Leslie’s “national crisis” excuse:

Chris Leslie says the reason he doesn’t want a by-election is “we’re facing a national crisis”. Apparently the country just won’t be able to cope if Chris Leslie’s constituents were given a chance to vote him out. OK. 🤔 #bbcqt

Columnist for Spiked magazine Ella Whelan was also on the panel. She addressed how independents like Leslie have a selective love for democracy when it comes to Brexit:

Then the audience started to challenge Leslie too:

The problem with the independents is that they do not have a democratic mandate. And this problem is chasing them everywhere they go in the media. Angela Smith suffered this excruciating encounter with Sky News’ Kay Burley on the subject:

"If you're so confident, why not have a by-election?" 😏 pic.twitter.com/wvUNEvJmcy

And Soubry suffered a similar grilling by a caller during an appearance on LBC:

This furious caller told Anna Soubry he was "disgusted" by her decision to leave the Conservatives and demanded that she holds a by-election.@Anna_Soubry https://t.co/mwVprg36Ik

A matter of democratic principle

The issue of by-elections has raised many issues about British democracy. Liz Bates of the Yorkshire Post spoke about voter disenfranchisement on BBC Newsnight:

Liz Bates, the Westminster correspondent for The Yorkshire Post, takes us through Natalie Bennett's column on the defecting MPs from her paper tomorrow#newsnight pic.twitter.com/B9PaxJC0qu

And as one member of the BBCQT audience stated, this whole debate highlights the failings of our first-past-the-post voting system:

Journalist Matt Turner had a more optimistic take on the angry debate the Independent Group’s behaviour has provoked:

The Independent Group could actually bolster the Corbyn project instead of damaging it – having looked at the sheer intensity of engagement it’s inspired among Corbyn and Labour supporters.

BBCQT has shown that the issue of by-elections isn’t going away for the Independent Group. Let’s hope this stimulates further debate challenging the undemocratic British state. But as The Canary has argued previously, the Labour quitters seem too gutless to call by-elections anytime soon.