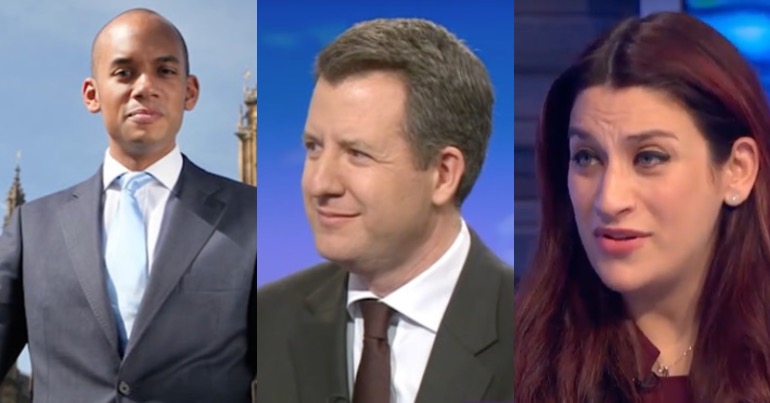 The seven MPs who have splintered from Labour to become independents claim they believe in a People’s Vote. But they don’t seem to believe in one for their own constituents. Because if they did, they would immediately call by-elections.

The seven have defected from the Labour Party, despite being voted in to represent it in 2017.

Perhaps when running for election in 2017, they fantasised that Corbyn would be gotten rid of. Or, thought that everyone would suddenly realise they were right all along, embrace centrism and rip up the radical manifesto they were elected on. That fantasy has not happened.

In fact, as any hope of ‘taking back control’ of the party from Corbyn’s member-led insurgency has died, they have become democratically marginalised. And their desperate cries (and those of their sympathisers) to respect Labour’s ‘broad church‘, often means ‘it’s only a broad church if we’re in charge’. It’s absolutely absurd.

So, they’re now treating the honour of being an MP like it’s something they’re entitled to. The whole thing stinks of false advertising: getting elected as a Labour MP, but then mutating into your own creation that nobody voted for while acting like noble statesman.

Disenfranchising their own constituents

The seven MPs weren’t elected as independents, but as Labour Party candidates. They won while they had red Labour rosettes stuck on them, and people liked Labour’s policies.

Because of this they should call by-elections and prove their constituents still want them as independent MPs.

But they probably won’t call by-elections, because they may lose. And, of course, being independent means they no longer risk being deselected by Labour members. This is a good way of prolonging their careers as MPs. Of course, it’s all dressed up as their selfless concern for the UK. But I suspect it’s more about their sense of self-importance.

What they’ve done is shown their comfort with disenfranchising their constituents. Because they’re not only essentially stealing a Labour MP from their constituents, but possibly also a future Labour government that many of them want to improve their lives.

They should be forced to call by-elections

People have had enough of this. Huge numbers of people are demanding that the seven MPs call by-elections. As Labour MP John Trickett argued in the Independent:

One of the seven, Gavin Shuker, said that the reason they have decided to leave the party is because they felt ‘accountable to those that elect us’.

In response to this I say: if you truly believe in accountability, then do the right thing and gain the legitimacy of the people you represent by holding a by-election.

One of the seven, Angela Smith, accidentally put forward the case for a by-election on BBC Politics Live, as Evolve Politics pointed out:

Angela Smith just quit Labour and is refusing to call a by-election.

When asked whether this betrays her constituents – who voted her in as a Labour MP – Smith responded saying:

"Well you'll have to go out and ask them."

THAT'S LITERALLY WHAT A BY-ELECTION IS, ANGELA. pic.twitter.com/CMKnstzxZO

Nothing says "sorry I ditched" better than a by-election. https://t.co/IcbkLYfZ0e

Elsewhere, the former Constituency Labour Party (CLP) for Luciana Berger, Wavertree, demanded a by-election to choose their own MP:

We demand a People's Vote in Wavertree, a by-election that is.https://t.co/vA65TUtqn0

Meanwhile, the editor of Tribune Magazine, Ronan Burtenshaw, pointed out some inconvenient history:

When Dick Taverne left the Labour Party in the 1970s he fought a byelection, saying it was the only way to defend his legitimacy. If these 7 MPs really believed the public backed them in their splinter, they would do the same.

And one Twitter user raised a fundamental question: who do these MPs answer to now?:

Just one thing needs clarifying by the 7 now independent MP's. If they don't have local members, or national members to answer to. Who do the have to answer to? I can only think it must be the constituents of their seats that have be answered to. Hence By-Election must be held.

Another stupid part of the British constitution

Although it’s easy to be furious at the group not calling by-elections, one Twitter user pointed out the bigger issue:

Once again, the British political system is shown to be rotten, allowing such undemocratic and unprincipled behaviour to happen.

Unsurprisingly, a petition is now circulating on 38 Degrees campaigning to change electoral law in this area. The petition seeks to ensure that MPs elected on a party ticket, but who then defect to become independents, must hold by-elections.

These ex-Labour MPs may give big speeches about the lack of leadership in British politics. But real leaders don’t run from democracy. And real leaders have democratic mandates to lead with. That considered, the new independents aren’t leaders, they’re cowards.