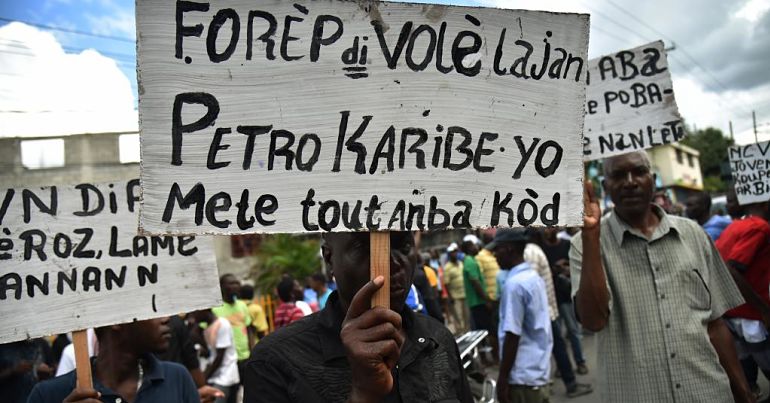 With all eyes currently on Venezuela, very little attention has been paid to the desperate struggle against US imperialism in Haiti. It’s time for that to change.

Haiti is the site of the world’s first successful anti-slavery revolt. In 1791, African descendants revolted against French tyranny and, 13 years later, inaugurated their own state. Haiti’s liberation from French slavery didn’t imply freedom from other forms of imperialism, though. Because while nominally free, Haitian people have suffered some of the most intense effects of US imperialism for over a century.

In this sense, ongoing protests against Haiti’s corrupt, US-backed government have occurred spontaneously, yet are centuries in the making. Once again, the people’s revolutionary spirit finds itself battling the forces of oppression and imperialism.

Corruption and US imperialism in Haiti

The US military occupied Haiti for 19 years between 1915 and 1934 within an effort to deter European influence in the Americas. During the occupation, the US marines oversaw massacres, and 15,000 Haitians were reportedly killed. The US continued with so-called “democracy-enhancing programmes” throughout the following decades.

According to Whitney Webb of MintPress News, Haiti has now:

become the ultimate neoliberal experiment that has forced its people to live in conditions so horrible that rivers of sewage often run through the city streets.

To a large degree, we can trace Haiti’s current crisis to events in 2010. After an earthquake reduced much of Haiti to rubble, a US-UN ‘relief’ effort led to:

rigged elections, caused a deadly cholera outbreak and sought to turn the entire country into one massive sweatshop for American clothing companies.

Corrupt politicians in Haiti have also reportedly pocketed around $4bn provided by the Petrocaribe scheme. Venezuela initiated this scheme to subsidise oil prices in the Caribbean and therefore relieve economic stress in countries like Haiti – the poorest in the Americas. The Haitian government’s decision to recognise Venezuelan opposition leader Juan Guaidó as interim president on 10 January, therefore, represents a dark day for much of its population.

Anger caused by these events fuels ongoing protests in Haiti.

Media coverage in Haiti and Venezuela

Media coverage of Haiti reflects and re-enforces the imperialism that has consistently haunted its history. The country is typically presented as a lawless and violent landscape. In 1994, for instance, the New York Times wrote:

Like the French in the 19th century, like the Marines who occupied Haiti from 1915 to 1934, the American forces who are trying to impose a new order will confront a complex and violent society with no history of democracy.

Today, the media remains largely silent on Haiti when compared to events in Venezuela. And there seems to be one major reason for this: protesters in Haiti are trying to topple a US-backed government, while those in Venezuela are trying to install one.

The Canary spoke to Kevin Pina, who is a documentary-maker, founding editor of independent news site Haiti Information Project, and a country expert on Haiti. Pina said:

We see daily coverage of Venezuela because it is targeted for regime change by the Trump administration, while the protests of the anti-corruption movement in Haiti go largely ignored for no other reason than the fact that [Haitian president] Jovenel Moise’s regime is supported by the same US foreign policy establishment.

When international journalists do report on Haiti, it is usually through a superficial lens of poverty and violence. Very few take the time to dig deeper into the story behind the story.

The media, for instance, regularly picks out the most shocking images of Haiti’s protests. It also focuses on issues of violence, lawlessness, and how the protests affect Western civilians before considering the West’s role in provoking them.

This is how the corporate media works in tandem with US imperial interests: it legitimises pro-US forces (as in Venezuela) while de-legitimising those that challenge US interests (like in Haiti).

Armed US citizens arrested in Haiti

On 18 February, Time magazine reported that:

Five Americans, one Russian and a Serb were arrested in Haiti and charged with a criminal conspiracy and illegal possession of weapons.

Here are pics of weapons and gear found in their possession: pic.twitter.com/fN68czxJ8I

It’s unsure in what capacity these US nationals are in Haiti, though local sources say the men claimed to be working for the Haitian government. Given Washington’s record in the country and region, it wouldn’t be altogether surprising if US mercenaries are involved in defending a US-friendly government.

As events in Haiti unfold, it’s important to look further than the corporate media. In doing so, the profound structures of oppression that Haitians have been fighting against for centuries become clear.