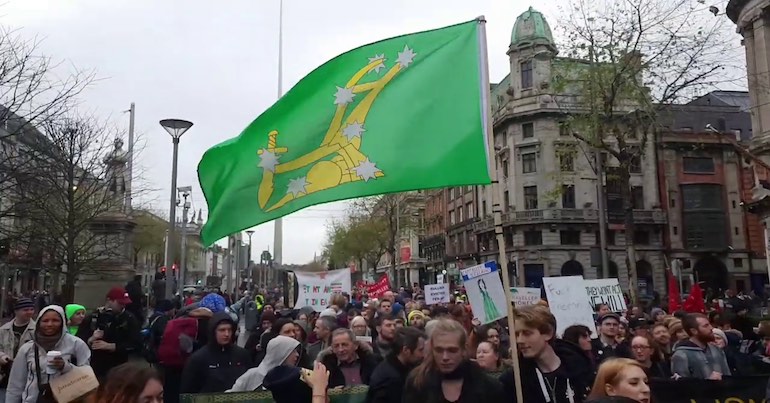 A new report has found there’s a high level of economic inequality in Ireland. The Think-tank for Action on Social Change (TASC) and the Foundation for European Progressive Studies (FEPS) published the report. They found that inequality in Ireland “is driven by the gains at the top at the expense of losses at the lower end”. The report says “Ireland now ranks in the middle among European countries” in terms of inequality. It also says this is partly explained by a low level of trade union membership.

The report states that a “sustained decline” in trade union membership happened “from around the early 1980s”. It states:

Unsurprisingly, this has been a period of steadily increasing inequality.

Ireland has an “environment favourable to employers”. As a result, Irish workers have few protections. And because of this:

At 23% of the workforce, Ireland has among the highest incidence of low pay in the EU with only Romania and Latvia higher.

But TASC and FEPS also say that the amount of working people who live in poverty is still low compared to Europe. This is because of wealth transfers to workers from the state via welfare policies. The report found that:

The state, in effect, subsidies a low-pay economy and enables employers to pay low wages.

In spite of this, the amount of people in Ireland at risk of poverty is high. TASC and FEPS say “only the Southern and certain Eastern European states have higher rates of poverty risk”.

Income inequality in Ireland, like most of Europe, fell after World War II. But from the end of the 1970s, inequality began to increase. The report points out that this “coincides with the advent of neo-liberalism” and a “rightward shift in economic policy”. Because of this, in Ireland between 1975 and 2009, the “top one percent almost doubled its share of national income”.

TASC and FEPS also say that, in some cases, the amount the top 1% earn “may be almost double” what is suggested by widely-used voluntary surveys.

The report says that one of the problems facing employed people is “insufficient pay”. Ireland’s welfare policies ensure that the “bottom ten percent does relatively well” compared to the rest of Europe. But the report mentions that providing welfare to people has become “more marketised”; and this “can prevent the less well-off from accessing services”.

Related to this is the high “at-risk of poverty rate” in Ireland which is 24%. This is because of the inability of people to find full-time jobs. Many find themselves “underemployed”. And one potential reason for this is “the sudden withdrawal of benefits upon entering employment”. The report points out:

For some, this provides a justification for greater means-testing and decreasing benefits.

But FEPS and TASC point out that there are not many people who earn more on welfare than in paid work. And regardless, increasing the levels of pay “would overcome economic disincentives to work” that exist.

FEPS and TASC do not directly refer to Ireland’s housing crisis. But they do mention the fact that “households in Ireland face unusually high borrowing costs”. And this is unlikely to be “compensation for greater riskiness of lending”.

A number of national demonstrations have taken place due to the housing crisis. Housing groups have planned more demonstrations for 9 March in Dublin and 11 March in Cork.

In its conclusion, the report points out that Ireland is currently “predispose[d]” to income inequality. And the result is:

This inequality is “driven by the gains of the upper classes and the rich”. And these “gains” come “at the expense of the working class and the poor”.

The report concludes, though, by saying “there appears to be significant scope for redistribution”. So with the appropriate “political will”, Irish society can be changed for the better.