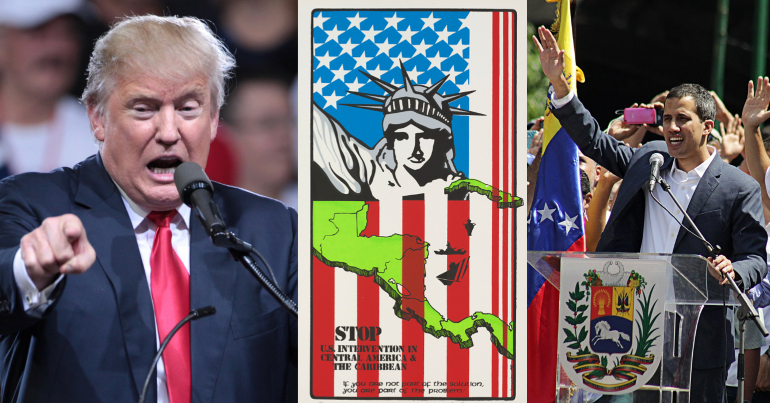 Donald Trump recently gave another speech calling for regime change in Venezuela. Yet while he waxes lyrical about the crisis in the oil-rich country, his administration stays silent about multiple catastrophes taking place in Central America. And this is no accident. Because a comparison shows not just brazen hypocrisy, but Washington’s long history of complicity with brutal governments that are willing to kowtow to US interests.

Playing up to exile hardliners in Miami

On 18 February, Trump spoke to a crowd of supporters in Miami. This came as his coup attempt against Venezuela’s government seemed to be losing momentum. But he nonetheless used it to escalate his coup-mongering rhetoric.

As The Canary reported, Trump also heaped praise on Óscar Pérez, who in 2017 orchestrated a terrorist attack against the Venezuelan government. At the same time, he stated that members of the Venezuelan military would “lose everything” if they refused to back the current coup attempt. And predictably, he again blamed socialism for Venezuela’s problems – a fallacy that’s easy to debunk.

But while Trump goes into overdrive paving the warpath against Venezuela, his administration has ignored other countries in the region with similar problems to Venezuela’s. Whether it be corruption, poverty, hunger, violence, human rights abuses from state security forces, breakdown of the rule of law, or the resulting exodus of people, the Central American nations of Guatemala and Honduras are prime examples.

Since his election in 2015, Guatemalan president Jimmy Morales has been presiding over ever-worsening political and economic crises that have led to at least tens of thousands of people fleeing the country.

Even according to US government officials, one of the main causes of people fleeing Guatemala is hunger. Another major cause is widespread corruption, which has led to chronic underfunding of public services. The country is also plagued by violence from both state security forces and non-state actors – including a campaign of murder against the country’s Indigenous communities – who operate with near-complete impunity. (Note that in each and every case, these are the exact kinds of problems used to justify foreign intervention in Venezuela.)

The Trump administration, however, has not only done nothing to sanction the Morales government; it has actually continued to provide it with aid. In early January, Morales attracted global criticism for expelling a UN-backed anti-corruption panel. And in response, 47 Democratic members of congress called on Trump to cut aid to Guatemala. But while he recently showed a willingness to do so, he proposed it not for humanitarian reasons but as a punishment for the ‘caravan‘ of Central Americans fleeing from conditions in large part created by US foreign policy.

It’s also worth looking at Honduras. Because as The Canary has previously reported, the country has degenerated into an ever-worsening human rights nightmare since a US-backed and State Department-aided coup in 2009. Its 2017 elections, meanwhile, were patently fraudulent and denounced by regional organizations – including the usually pro-US Organization of American States.

Not only has the US never imposed any kind of punitive measure on the Honduran government; it has also been generously funding its state security apparatus and even provided propaganda campaigns to “scrub” the image of the post-coup governments. And as for the 2017 election, it accepted the result without question.

In both Honduras and Guatemala, the US has a long history of ignoring or backing massive human rights abuses. So Washington’s attitude today is hardly surprising. But it does serve to highlight both self-interest and hypocrisy in the country’s current grandstanding on Venezuela.

US governments past and present have shown clearly that they care little for democratic norms, human rights, the rule of law, anti-corruption efforts, or state violence in Latin America. Rather, they cynically use these issues as propaganda to justify attacking countries that defy its geopolitical interests or resist its preferred neoliberal economic model. For more obedient countries like Guatemala and Honduras, meanwhile, there seems to be no crime too serious for Washington to overlook.

The double standards are clear. Yet it seems that the corporate-owned media has been successful in fooling most members of congress and many European governments into supporting the latest US regime-change efforts in Venezuela. And like Washington, these outlets give only a tiny fraction of their time to the devastation in Central America, revealing their servility to US imperialist power.

We must call out their hypocrisy and their support for continued US meddling in Latin America. Because history shows the US is no fair broker or positive influence on the region. Rather, wherever it has acted, it has done so in its own self-interest and left a trail of death and destruction in its wake.