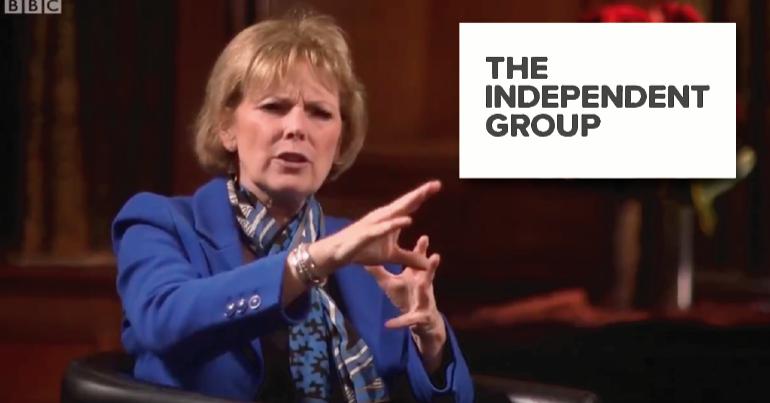 In a farcical interview, Anna Soubry admitted that The Independent Group (TIG) still hasn’t had conversations about policy. As politics is about implementing policies, this seems like a startling oversight. Soubry seems confident that the breakaway MPs’ “shared values” will mean everything comes together, though.

This is like watching that leaked scientology interview with Tom Cruise.#Newsnight pic.twitter.com/YbjAjS0Zgn

On BBC Newsnight, Host Kirsty Wark put it to Soubry that TIG would accept MPs who differed on policy. Soubry argued:

Sorry, we don’t have any policy; we’re not a political party.

Wark argued that TIG would “eventually have to stand for something” – that it couldn’t just be a party of “shared values”. Soubry shot back:

No, no, no, no. All these things, I have no doubt will happen, and come about. That is not – if I may say – you’re still stuck in the old way of doing things. This is something new and different.”

Despite arguing that TIG is something “new and different”, it’s difficult to prove this, as it hasn’t worked out what’s new or different about it. Not having any policies is certainly unique, but that’s not necessarily a good thing. As for being “stuck in the old way of doing things”, her avoidance of policy discussion sounds a lot like New Labour, the coalition government, the Cameron government, the May government, etc.

The thing that unites us is not just the values and the principles, but the fact that we are not tribal.

That’s all well and good, but “values and principles” aren’t going to save people from austerity. This is especially true of TIG values, as Soubry has praised austerity since joining the group. As these MPs have “shared values”, can we assume her TIG colleagues also approve of austerity?

Wark pointed out “we need to know what you’re for, not what you’re against”. Soubry said, “but you do know what we’re for” – referring to the ‘values’ of the group. Worryingly, Soubry went on to say this:

We believe in sound economic policies, and a sound economy – that can fund first-class public services… We’re tolerant.

Most people would say they believe in sound economic policies and tolerance. Politicians are supposed to deliver on these things, though, which means actually explaining how they’ll do that.

Wark followed up by asking if TIG wanted high or low taxation, to which Soubry admitted:

we’ve not even had these conversations yet.

Wark questioned what would happen if, when these conversations eventually happened, TIG members disagreed. Soubry argued:

It’s certainly the case that TIG can’t speculate like that, because they don’t seem to discuss things. Soubry continued:

We just know between us as a group that we have these common values and these common principles and they guide us in our political life, and we’ve recognised them in each other, and they’ve brought us together.

So, that’s reassuring. Or it is to anyone who likes really vague statements, anyway.

Potentially, TIG will pull some ideas together before the general election it’s trying to avoid:

It would be wise for the group to do so, because if not, it’s going to be asking people with real problems to vote for wishful thinking.