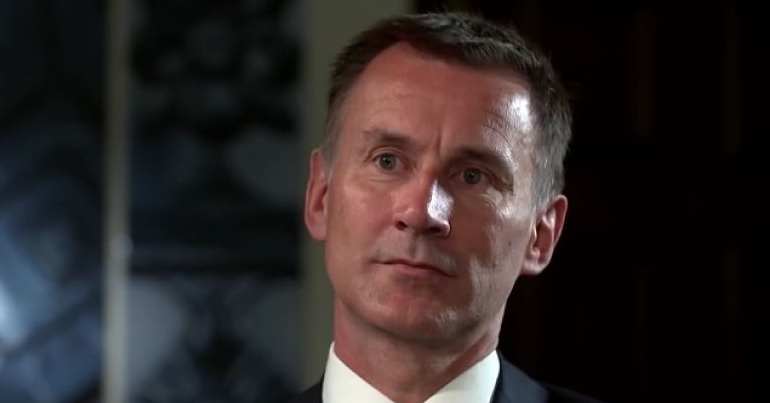 Foreign secretary Jeremy Hunt appears to be doing everything in his power to make sure the UK government remains one of the world’s leading arseholes.

Germany is one of several countries that have said they will not sell arms to Saudi Arabia due to its ongoing war on Yemen and the murder of journalist Jamal Khashoggi. But this principled stand hasn’t impressed Hunt. Because he’s lobbying the German government to relax its stance.

But Hunt’s efforts appear not to have gone done well. Because German foreign minister Heiko Maas has said the ban will stay.

Hunt set out his ‘concerns’ in a letter to Maas prior to travelling to Germany to discuss Brexit plans. Hunt stated that:

I am very concerned about the impact of the German government’s decision on the British and European defence industry and the consequences for Europe’s ability to fulfil its Nato commitments.

‘The wrong side of the law’

It is, however, a shame that Hunt isn’t so ‘concerned’ with the number of people killed in the onslaught in Yemen. As The Canary previously reported, the House of Lords International Relations Select Committee said:

Although conclusive evidence is not yet available, we assess that it is that it is narrowly on the wrong side: given the volume and type of arms being exported to the Saudi-led coalition, we believe they are highly likely to be the cause of significant civilian casualties in Yemen, risking the contravention of international humanitarian law.

Jeremy Hunt has told Germany to lift their ban on sales of arms to Saudi Arabia, within days of The Lords ruling the Tories are breaking humanitarian law. Defence contractors are in Abu Dhabi this week for the Middle East’s biggest arms fair, backed by Tory ministers.

A House of Lords committee this weekend said it believed the UK was on the 'wrong side of humanitarian law by selling arms to Saudi for use in the civil war in Yemen."https://t.co/aoz44TogX1

Or how about the UK rethinks its lack of a ban on arms sales to Saudi Arabia?

This comes just days after the @LordsIRCom found that the UK was "on the wrong side" of the law by licensing arms exports to Saudi Arabia https://t.co/OIvrXg0UET

Remember what your job is

A press release from Campaign Against Arms Trade (CAAT) stated that:

Since the bombing of Yemen began in March 2015, the UK has licensed £4.6 billion worth of arms to the Saudi regime, including:

And Andrew Smith from CAAT reminded Hunt what his job really is:

It is totally inappropriate for Jeremy Hunt to use his position in this way. He is meant to be a statesman, not a lobbyist for arms companies and the Saudi dictatorship.

The humanitarian crisis in Yemen is the worst in the world. Tens of thousands of people have been killed in this brutal and devastating war, and yet the main goal for the UK Government and the Foreign Secretary has been to maximise arms sales. That tells us everything we need to know about their priorities.

Smith further pointed out that:

Germany should never have been arming Saudi forces in the first place, but it has done the right thing by ending the sales. If Jeremy Hunt, Theresa May and their colleagues want to do the right thing for the people of Yemen then they must follow Germany’s lead.

This sentiment was echoed by many on social media, including Labour MP Fabian Hamilton:

The Foreign Secretary has travelled to Berlin to lobby for the Saudi regime that continues to target civilians in Yemen. Britain should stand in solidarity with Germany and suspend arms exports licenses to Saudi Arabia until a proper ceasefire is achieved.https://t.co/Cqy4EafEU0

Spare a thought for the poor arms dealers.
I’m just so proud of this government. https://t.co/Eaevg4FQqL

The UK has licensed almost £5bn in weapons sales to Saudi Arabia since the Yemen war started in March 2015. The UN has accused Saudi Arabia of launching “indiscriminate attacks” on Yemen. Since early 2016, an estimated 56,000 Yemeni people have been killed. The UN has warned that half the entire Yemeni population, some 14 million people, are at risk of famine. The situation remains “the world’s largest humanitarian crisis“.

This is what’s happening. This is the trail of death and destruction that Hunt is advocating.

The UK should stop all arms sales to Saudi Arabia. But lobbying other countries to drop the stance they’ve taken is a new low. And it really does make the UK a world-leading arsehole.