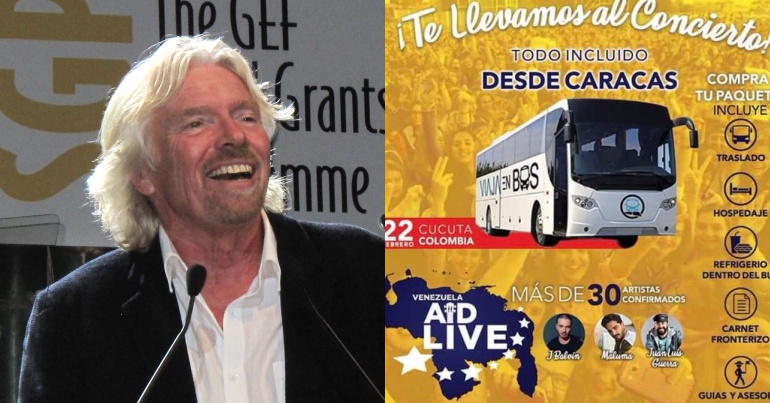 On 22 February, billionaire Richard Branson has planned a ‘Live-Aid’ style concert on the Colombian-Venezuelan border. Branson claims this is to raise money for ‘humanitarian aid’. But as The Canary has been reporting, the situation in Venezuela is critical with a US-led coup attempt trying to remove the democratically elected president Nicolás Maduro. Now, it seems that wealthy opposition supporters can buy a luxury package holiday to Branson’s concert.

“The most trendy concert of the decade”

And Blumenthal is absolutely right. Because Branson’s gig is the latest example of “interventionalist propaganda”.

The US and corporate media continue to push a narrative that Venezuelan people must be ‘liberated’ from Maduro. In its support for Washington-backed opposition leader Juan Guaidó, the UK is fully complicit in this lie. There are widespread claims that Maduro is actively starving the population by rejecting US ‘humanitarian aid‘. Yet, as The Canary reported, Maduro has both requested and received emergency aid from the UN since November. Much of the current crisis in Venezuela is a direct result of US-led economic sanctions that cost the oil-rich country billions.

The US has continued to stockpile aid on the Venezuelan border. Many international aid agencies, including the UN and the Red Cross, have also criticised US attempts to ‘politicise’ aid. And Branson’s gig only adds to this hypocrisy.

Perhaps the best way to illustrate the sheer hypocrisy of Branson’s move is a satirical April Fools’ Day article from Venezuela Analysis. In 2013, it declared that the Venezuelan government would be selling “all of its community media to Rupert Murdoch” and its entire “health system” to Branson. With beautifully wry humour, this highlights the stark contrast between the principles of Maduro’s socialist government against privatised profiteering and neoliberalism in both the UK and US.

As Blumenthal’s tweet shows, for many wealthy, privileged anti-Maduro supporters, Branson’s event will be a luxury break. A total contrast to lives destroyed in Venezuela from harsh US sanctions designed to “make the economy scream”.

Meanwhile, to stick two fingers up to Branson, pro-government forces have organised a “two-day ‘peace’ concert on the Venezuelan side of the border” under the banner “No one wants war”.

Not surprisingly, many people are disgusted by the whole premise of Branson’s concert:

Disgusting. I saw many latin artists promoting their participation in this event. Some from countries that have historically suffered from the same kind of US intervention they are now propaganda pieces for. I don’t even know what to think. 😡

The modern GoFundMe for imperialism

The Red Cross and the UN, unequivocally agree, don’t politicize aid. Leave the Venezuelan people alone to exercise their legal right to self determination. pic.twitter.com/I0yS3u75b6

But Branson wants the world to think that he’s a ‘helping hero’.

And let’s not forget, that despite his best efforts to play the philanthropic humanitarian hero, Branson has profited from wading into the privatisation of UK transport and medical services. This is, after all, the same man who’s happy to sue our cash strapped NHS.

Featured images via UNclimatechallenge/Flickr and screengrab