Ignore the media bullsh*t. Jeremy Corbyn just cornered Theresa May with a message from the EU. - Canary 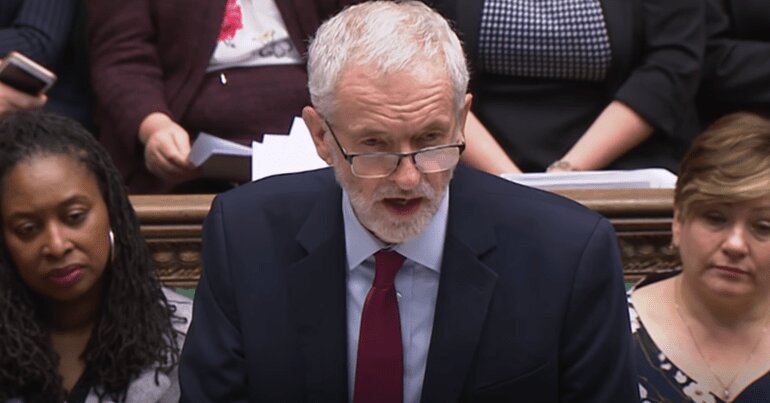 Ignore the media bullshit. Jeremy Corbyn cornered Theresa May with a message from the EU on 26 February. And the message confirms that the only person preventing a Brexit compromise is the prime minister.

“No doubt” on Labour’s compromise

During her speech, May pledged to enable parliament to delay Brexit rather than leave the EU without a deal on 29 March. If her deal is voted down again, the prime minister will offer MPs votes on ruling out no-deal and extending the leave date.

But Corbyn argued that May’s proposals only amount to more ‘running down the clock’. He then reiterated Labour’s solution to the deadlock: a new permanent customs union with the EU to solve the issue of the border in Ireland.

The Labour leader told the Commons that, after visiting Brussels on 21 February, his Brexit team:

left with no doubt whatsoever that our proposals are workable and could be negotiated.

The solution that’s workable across the board

Echoing Corbyn’s assessment, European council president Donald Tusk has previously told May that Corbyn’s Brexit plan could break the deadlock. And this seems to add up. Labour’s Brexit plan is supported across the board:

The only reason parliament cannot reach this compromise is because May refuses to face down the hard-right Brexiteer faction in her own party. May could unite the country through trading the hard-Brexit Tory votes for the support of the majority of the 256 Labour MPs.

But May appears to be putting Conservative party unity first. MPs have already rejected May’s deal by the biggest margin in history. Yet the prime minister is not offering MPs a vote on a new deal now. She will simply ask them to vote again at a later stage. In the Commons, Corbyn asked her:

Will she be straight with people? The withdrawal agreement is not being reopened. There is no attempt to get a unilateral exit on the backstop or a time limit.

Corbyn has long offered a Brexit compromise that could move the UK forward. It’s not a stroke of genius, but the obvious solution to the problem. By contrast, May has only dealt in childish political game playing. Whether or not we are in the EU will be insignificant if we hit climate change tipping points that threaten to wipe out the majority of the earth’s species. If Britain actually gets on with Brexit, we can concentrate on the other crucial issues such as delivering a renewable energy revolution.

Quit the games and back the compromise. It’s not rocket science.