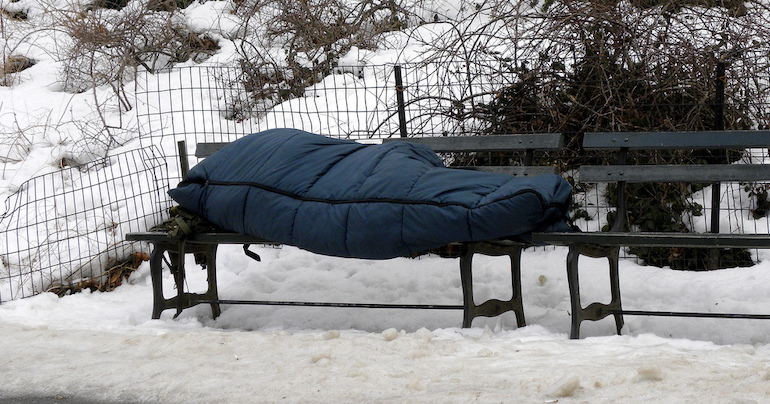 On 31 January, the government’s latest figures showed a drop in the number of homeless people rough sleeping for the first time in eight years. Although the Conservative government celebrated this news, these figures are fatally and tragically flawed.

“The devastation of sleeping rough”

But the fall in these figures doesn’t account for the fact that rough sleeping has soared under consecutive Conservative-led governments. It’s still up 165% since 2010 so there’s nothing for the Conservatives to ‘celebrate’:

Annual #roughsleeping figures published today show a decrease in the number of people sleeping on the streets for the first time in eight years https://t.co/y4yr72zzvq pic.twitter.com/rIwkQY1myj

Homeless charities noted that these figures are not accurate anyway. As the Independent reported, Jon Sparkes, chief executive of homeless charity Crisis explained, the count:

was widely believed to be an “unreliable” source which “significantly underestimated” the number of people experiencing the devastation of sleeping rough.

The problem is, these counts and estimates inevitably miss a significant number of people, including those not rough sleeping on that particular night, those hidden from view and who aren’t bedded down for the night.

As temperatures across the UK drop below freezing, demand for homeless shelters is also at a record high. In December 2018, Crisis also recorded a 20% rise in the numbers of people rough sleeping in London alone. This included, “1,382 people sleeping rough for the first time, a rise of 28%”.

“A matter of life and death”

With more and more people dying on our streets or while homeless, it is also a matter of life and death.

Rough sleeping is preventable, and these tragic deaths can be stopped. But to do that, we need further urgent action, not only to provide emergency support for those sleeping rough now, but also to reverse the years of cuts that have devastated the support services that help people to move on from rough sleeping, or to avoid homelessness in the first place.

And the tragic fact that more homeless people than ever are dying on our streets also reveals another shocking issue with these latest government figures.

“People with nowhere to turn are dying”

As The Canary previously reported, the number of homeless people dying on the streets or in temporary accommodation has more than doubled over the last five years.

The government claims that there are now 74 fewer rough sleepers each night. Yet the number of dead homeless people is another stark reminder of just how inaccurate these figures may be.

Because another tragic investigation found that in 2018, 554 homeless people died in the UK. According to the Bureau of Investigative Journalism, even this figure is “likely an underestimate”. The dead include:

Yet, the government “admitted” it hasn’t “offered any extra funding or support to councils” to prevent these deaths. As Matt Downie, director of policy and external affairs at Crisis, said:

It’s a failure of the largest magnitude that in one of the world’s richest nations, people with nowhere to turn are dying.

These are people, not ‘just’ numbers

That we live in a country where even one person must sleep on the streets is bad enough. But that this – literally – kills so many people is unforgivable. As Labour leader Jeremy Corbyn said, all “these people were tragically failed by this Tory Government”.

There’s little chance, no matter what the Tories say, that this crisis is over. As The Canary previously reported, homelessness has reached “dramatic proportions” in the UK. By 2020, at least another 1 million households risk becoming homeless, “because of rising rents, benefit freezes and a lack of social housing”.

Perhaps we can’t directly compare these latest rough sleeping statistics with the rising number of homeless people’s deaths. But surely this flags an even more sinister issue. Government calculations state there were 74 fewer rough sleepers in 2018. Yet in the same year, 554 homeless people also died. These numbers simply don’t add up, and that’s cause for even deeper concern. Because these aren’t just numbers, they’re people.