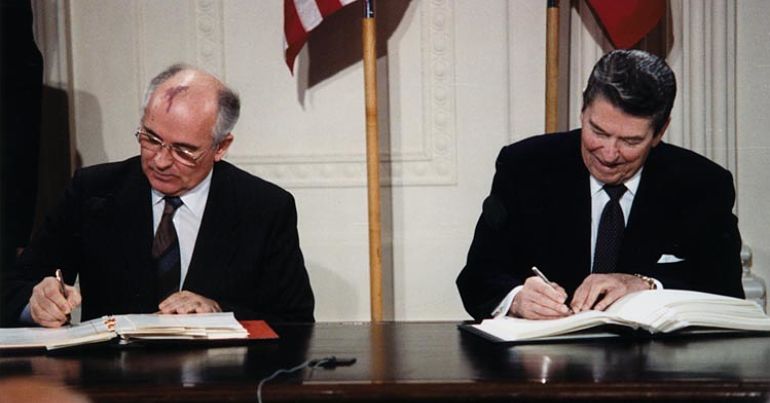 On 8 December 1987, US president Ronald Reagan and Soviet general secretary Mikhail Gorbachev signed a historic agreement to eliminate a wide range of intermediate-range nuclear and conventional missiles. The ban applied to the US and 12 former Soviet republics, including Russia. It was ratified by the US senate in 1988 by 93 votes to 5.

Current US president Donald Trump aired intentions to withdraw from the Intermediate-Range Nuclear Forces (INF) Treaty over 30 years later, in October 2018. And on 1 February 2019, he made these intentions official policy.

The Trump administration is accusing Russia of violating the terms of the INF Treaty. Russia has accused the US of the same.

For far too long, Russia has violated the… INF Treaty with impunity, covertly developing and fielding a prohibited missile system that poses a direct threat to our allies and troops abroad.

Tomorrow, the United States will suspend its obligations under the INF Treaty and begin the process of withdrawing from the INF Treaty… We will move forward with developing our own military response options and will work with NATO and other allies and partners to deny Russia any military advantage from its unlawful conduct.

The New York Times reported that US secretary of state Mike Pompeo added:

Russia has jeopardized the United States’ security interests, and we can no longer be restricted by the treaty while Russia shamelessly violates it.

While Trump claims that Russia’s actions pose “a direct threat to our allies and troops abroad”, many worry that Washington’s actions will initiate a global nuclear arms race.

The act’s goal is:

To prevent a nuclear arms race resulting from weakened international restrictions on the proliferation of intermediate- and shorter-range missiles, and for other purposes.

It highlighted that Washington has not yet exhausted all options to force Russia to comply with the treaty, and continued:

Other groups have also slammed the move. Global Zero, for example, is an international organisation which seeks a world without nuclear weapons. And its executive director Derek Johnson said:

Flipping over the negotiating table and storming out of the room may have worked in real estate, but when you’re dealing with nuclear treaties, the risk of misplaying your hand isn’t a failed business venture—it’s an arms race and possibly nuclear war.

A good day for weapons manufacturers

The latest announcement comes a day after Trump rejected his own intelligence officials‘ assessment of Iran’s nuclear capability. On nuclear policy, Trump seems to be progressively less reliable. And his misjudgements consistently favour the spread of nuclear weapons.

According to Beatrice Fihn of the International Campaign to Abolish Nuclear Weapons (ICAN):

The only ones applauding the decision to tear up the INF Treaty are the nuclear weapons manufacturers, eagerly anticipating the kickoff of Cold War II.

In short, it seems the world is no longer sleep-walking towards nuclear war. We’re marching head on.