Streatham Labour just gave Chuka Umunna a ‘people’s vote’. But it wasn’t the one he wanted. - Canary 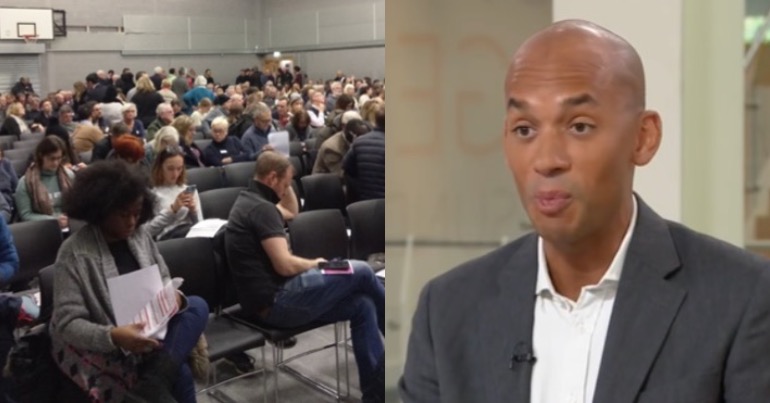 After a tight vote, Labour members voted in favour of democratic party reform in Streatham. But one person unlikely to be happy about it is Streatham’s centrist MP – and arch Corbyn critic – Chuka Umunna.

What was at stake?

The Canary previously covered the build-up to the vote in detail. Put simply, it determined whether Streatham Constituency Labour Party (CLP) should adopt an All Member Meeting system (AMM) which allows all members to vote to decide local labour policy. The existing general committee system (GC) had allowed a relatively small group of delegates to determine policy on behalf of all members.

The following tweet gives some insight into the proposed reform:

And many on the left in Streatham Labour believed this existing system permitted a small clique of Umunna’s allies to control the CLP:

In Labour, our members decide our policies – not unaccountable elites. That’s why St Leonard's in Streatham is voting to move to One Member One Vote or All Members Meetings. Make sure your voice is heard by coming to vote on Thursday. Read more https://t.co/xSHtP9CqiQ

The possibility to easily move to an AMM system was permitted under Labour’s Democracy review which was championed by Jeremy Corbyn’s democratic reforms of the Labour Party. Significantly, this win could pave the way for a reselection process for Umunna, Streatham’s current MP. And as The Canary previously reported, Umunna has become despised by the left of the Labour Party due to his constant attacks on the current leadership.

The vote took place on 31 January with around 500 people in attendance:

Huge hall of Labour members have come to vote on proposals for 'all members meetings' in Streatham CLP. There is still a big queue outside. This is what a mass movement looks like pic.twitter.com/XFZDzLmwSd

The final result was tight:

The CLP will now be run through AMMs that any CLP member can attend. This replaces the old delegate system

But was welcomed with euphoric scenes:

#StreathamCLP just voted to move to an all member system!!!!! pic.twitter.com/J2A5RXpR27

Others saw the funny side of the outcome:

I think when Chuka Umunna called for a People’s Vote, he didn’t mean in Streatham…

And Owen Jones, who campaigned for the outcome, congratulated the CLP:

For many in attendance, the proceedings demonstrated why AMM is essential for greater political engagement. Tom Munday of the New Socialist remarked on the quality of speeches it permitted members to make:

Streatham Left did themselves proud with some cracking speeches, particularly from new/young members, completely torpedoing the narrative that delegates are better for their representation

And for one member, this meant looking forward to attending future meetings:

Others commented on how the CLP had been run prior to the vote:

Even those in support of delegate structure commenting on 'how badly the CLP has been run', often it seems with the intention of keeping new members and ideas locked out.

But unsurprisingly, not everyone was happy with the result – namely the so-called centrists of the party. Some in attendance heard disparaging comments aimed at members seeking democratic reform:

Overheard at Streatham AMM: ‘I wish the party had said that: “we’re full”.’ Didn’t hear the first part of the sentence but quite clear what he means. Anti-mass membership. Anti-labour as a real force for social change. Says it all.

I thought Streatham was one of the most ethnically diverse areas in the UK, 42% non white? These folk seem a little bit un-diverse…. https://t.co/Qb9HJO2gfT

And that it harmed Labour’s union links:

It's what two mass movements look like when they both mobilise. There were 183 votes against the 190 cast for breaking the union link and removing equal representation of women. https://t.co/YhsFPufUgH

But Streatham socialists didn’t take these charges lying down: 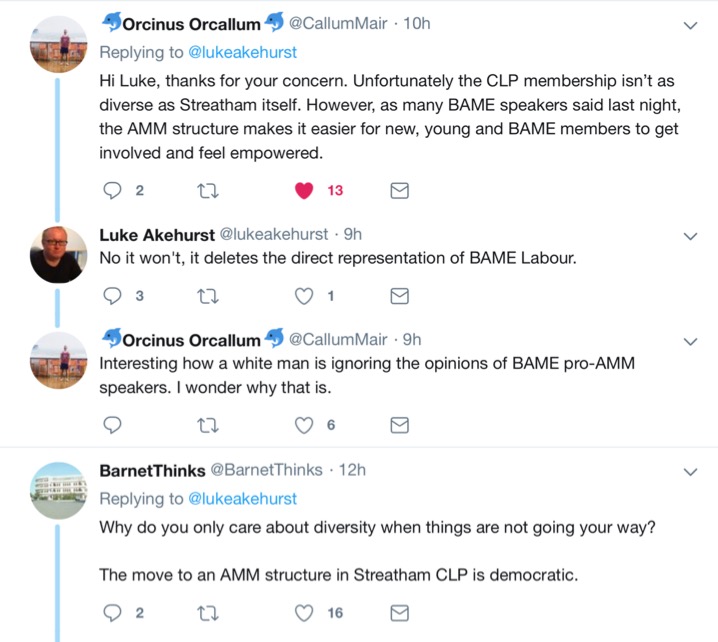 And elsewhere, union members praised the opportunities for representation the AMM structure may provide.

The Blairite ship is sinking fast

The bitter reaction to the result by Labour’s centrists reveals a faction in terminal decline. It is a spent force, lashing out at democratic reforms that they fear undermine their historic domination. And, now democratically relieved from power, they can no longer so easily prop up their preferred candidates.

And as Skawkbox reported, the same result also occurred in Wimbledon CLP on the same night. But by a far larger margin. Let’s hope this is the start of things to come.