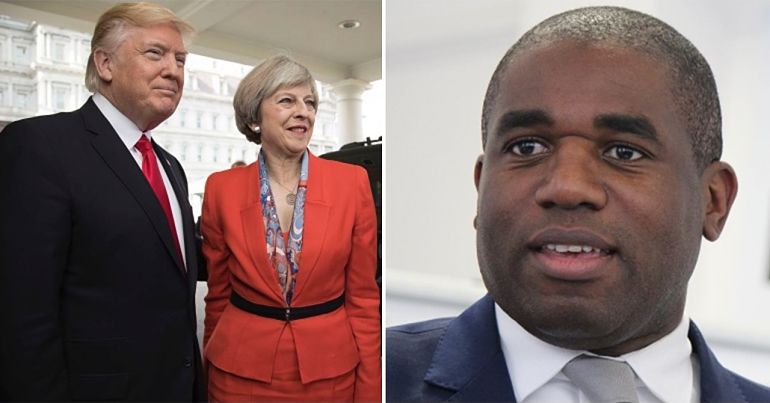 An announcement on 23 April confirmed that Donald Trump will make a three-day state visit to the UK on 3 June. According to the BBC, the White House said this visit reaffirms the “steadfast and special relationship between the United States and the United Kingdom”. But many people are unhappy, to say the least. And Labour’s David Lammy nailed exactly why.

Ahead of the formal announcement, Lammy described Trump as “deluded, dishonest, xenophobic, narcissistic”. And he also explained why he’s not welcome:

Deluded, dishonest, xenophobic, narcissistic, Donald Trump is no friend of Britain. He is not fit to hold public office, let alone worthy of our country's highest honours and a banquet with the Queen. Theresa May is selling out the UK to a serial liar and a cheat. #TrumpUKVisit https://t.co/2onIyKU8ZO

Labour’s Emily Thornberry also pointed out the atrocious timing of this announcement. “It beggars belief”, she said, that it coincided with news that Trump has threatened “to veto a UN resolution against the use of rape as a weapon of war”. She continued:

This is a President who has systematically assaulted all the shared values that unite our two countries, and unless Theresa May is finally going to stand up to him and object to that behaviour, she has no business wasting taxpayers’ money on all the pomp, ceremony and policing costs that will come with this visit

Yet top Conservatives gave a very different response. According to the BBC, Theresa May said this state visit is an:

opportunity to strengthen our already close relationship in areas such as trade, investment, security and defence, and to discuss how we can build on these ties in the years ahead.

Big news: @realDonaldTrump and @MELANIATRUMP will be hosted by Her Majesty The Queen for their first State Visit to the United Kingdom in June. The transatlantic relationship has been the foundation of global peace and prosperity for many years – and great things are yet to come!

Lammy and Thornberry weren’t alone in their criticism. For a start, many people are also angry about the inevitable costs of the visit:

Why is there never enough money to feed the poor but always enough to give a fascist a state visit? #TrumpUKVisit #stoptrump pic.twitter.com/TP0ltPAvIv

His last visit was just a *working visit* & it cost us millions. This will be a State visit & will be even more lavish at OUR EXPENSE. We've made it clear that we don't want a #TrumpUKVisit but PM May ignores us to hold hands with this creep.#SackThePMhttps://t.co/PoqkZouBCd

Others, meanwhile, pointed out some home truths:

We've got enough despicable fuckwit politicians here without getting a visit from the biggest one of all. #TrumpUKVisit

Ref the Trump visit to the UK in June I'm sick of @10DowningStreet assuming they know what's best for us without double checking first. The huge majority of us don't want him! #TrumpUKVisit

However, as the Peace Pledge Union pointed out, Trump’s visit does create opportunities to stand up for “peace and human rights”:

#Trump will make a state visit to the UK in June. We'll be there to meet him. So will many other people committed to peace & human rights. Let's challenge #Trump, the UK government's collusion with him, and all rulers who peddle militarism. #TrumpUKVisit #PacifistNotPassive

#TrumpUKVisit
Really? Again? He’s facing impeachment for criminal behaviour so let’s give him a parade!
We’ll be there again to welcome him. pic.twitter.com/HTTnAOtGy4

Lammy is spot on. And it says everything about May and this Conservative government that they’re willing to welcome Trump. But no matter what Tory MPs say, Trump and his vile views should expect full-scale resistance from many people in the UK.