Amid mass shootings, leading historian says 'white supremacy is baked into the US constitution' - The Canary 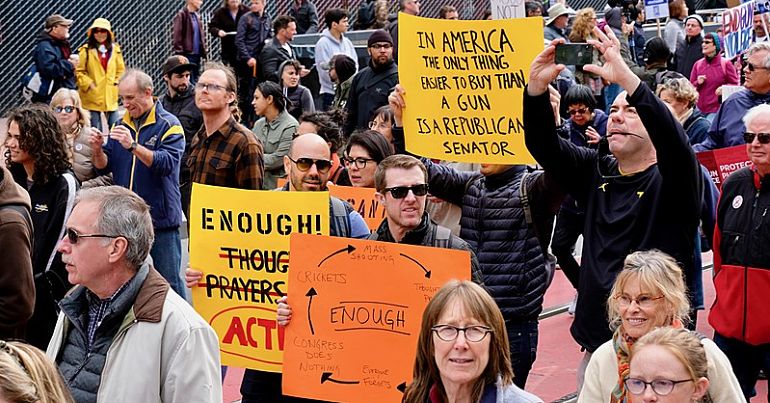 The Second Amendment of the US Constitution becomes the focus of intense and polarised debate in the wake of each mass shooting. It is a debate pierced by economic interest groups and fierce emotional impulses; yet history rarely enters the conversation at the exact moment that it’s most needed.

After the recent white supremacist mass shooting in El Paso (the eighth worst in recent US history), The Canary spoke with leading historian on the Second Amendment, Roxanne Dunbar-Ortiz. She is the author of Loaded: A Disarming History of the Second Amendment, which illustrates how the white supremacy of the country’s settler colonialists lives on in the country – not least through gun legislation.

After each mass shooting in the US, we hear a range of arguments across the media calling for greater gun control. What are the biggest misunderstandings and lies told about the Second Amendment, and how should we really understand it?

Any conversation about dealing with gun violence in the United States has to begin with the second amendment and its true function from its establishment, throughout the 19th-century brutal conquest of the continent, and its ideological function propping up white nationalism today.

Adding the right to bear arms to the constitution as one of the initial ten amendments was not the creation of a new right, rather a validation of an already existing practice of Anglo settlers forming their own militias to burn and loot Indigenous towns, burning their fields, killing and raping, torturing, and seizing of the already Indigenous-developed farms and fisheries of the Atlantic Coast, colony by colony, to push Native peoples to the peripheries. Those militias arrived with the first invaders, led by the mercenary John Smith at Jamestown and mercenary John Mason in the Massachusetts colony. When racial slavery—the slave codes–became established by the late 1600s, these militias became slave patrols. The second amendment contains colonial violence in a nutshell, and neither liberals or conservatives want to acknowledge that reality.

Many people have observed that the El Paso shooter’s ‘manifesto’ echoes how Donald Trump speaks about immigrants, and accused Trump of ‘stochastic terrorism‘. Is the white supremacist rhetoric coming out of the White House a departure from normal US politics, or does Trump reflect the soul of the US in ways that people would rather not confront?

The United States was founded as a white republic and white supremacy is baked into the constitution and institutions that exist today. For instance, the slave patrols, citizens’ militias, that were tasked with controlling slave populations in the slave states, continued to function during the Civil War that ended in outlawing slavery. But these slave patrollers simply put on hoods and robes and continued to play the same role in terrorizing and controlling the freed Black population. Although illegal during the US military occupation of the South, they were so many and so widespread that they could not be stopped. When the Army pulled out, they took off their hoods and robes and became the local sheriffs controlling the Black population under Jim Crow. With the Black diaspora escaping the South to northern and later west-coast cities, southern whites also migrated, forming all-white police forces in cities. In 1950, the US was a locked-down white male republic, African-Americans living segregated, Native peoples on tiny portions of their original territories, Mexicans as indentured agribusiness workers, women with few rights, especially if they were married…

With the humiliating loss of the US war in Vietnam in the mid-1970s, and with nearly 700,000 combat veterans back in civil society, armed white nationalist groups multiplied. Ronald Reagan’s presidency was openly, although coded, white nationalist, with the US covert counterinsurgencies in Afghanistan and Central America employing many of the disgruntled, out-of-work vets as mercenaries and domestic terrorist groups appearing, particularly in eastern Washington and Oregon, Montana, Colorado, and in the 1990s spreading to the entire continent. War fever, with the invasions of Panama, the Gulf war, and the post-9/11 wars produced more armed white nationalists.

The election of a liberal Black Democrat to the presidency in 2008 was a blow to increasingly normalized white nationalism, with Muslims as a new Brown enemy. Immediately, the Tea Party movement began, and Donald Trump – reality TV star and real-estate developer – began his campaign to prove that Obama was not US-born, a great boon to white nationalists who then carried him to the presidency.

Trump abandoned the ‘dog whistle’ white supremacy that the Republican Party embraced with its ‘Southern strategy’ under Richard Nixon, and has gotten by with outspoken white supremacy with no damage to his solid 40% base. Clearly, the El Paso mall shooter was empowered to act based on Trump’s characterization of Central American refugees as invaders.

How is the relationship between white supremacy and gun culture reinforced through popular culture – films, action figures and toy guns, the stories Americans tell about their country – in the US?

I don’t believe that popular culture, in terms of films, video gaming, toys, etc. have that much of an effect in reinforcing white supremacy and gun culture. I do think the reality, not so much the representation, of US militarism and endless wars against non-European peoples, which are a continuation of the centuries of militarism and warfare in seizing the continent, with Native American peoples and Mexicans being the enemy, form a permanent culture of violence.

With the second amendment permission for unlimited gun ownership, that violence goes beyond words and fist fights. The NRA [National Rifle Association] and Republican Party talking points about gun violence attempt to construe popular culture as the cause, particularly ‘Hollywood’ and video gaming, but dozens of studies and simple observation nullify the argument. The US origin and historical narratives glorify what are actually acts of genocide in the establishment of the original colonies and the expansion to the Pacific.

Rather than having a reckoning with that past at the end of the Vietnam War and honoring the anti-war movement and the disobedient soldiers, the ruling class turned the US into a victim, enabling and encouraging the myth of US soldiers missing in action in Vietnam. During the 1980s, the continued US wars had to operate clandestinely, covertly, because the majority of the population was anti-war. But by 1989, the Marines could invade and occupy Panama and change the regime there without notable protests; two years later, the US could amass a half million troops to invade and occupy Iraq. The shadow wars of white nationalist militias grew domestically, nourished by war fever and violence. It only got worse after 9/11.

Yes, John Wayne killing Mexicans and Indians and Rambo killing Asians have been wildly popular, but they never come near the real thing in instilling violence and gun fetishism.

Congressman Steve Cohen tweeted after the El Paso shooting: “You want to shoot an assault weapon? Go to Afghanistan or Iraq.Enlist!” (He later deleted the tweet.) How was the US military apparatus forged through the white supremacist genocide of Native Americans, and how does US foreign intervention reify gun culture at home today?

The US military was forged in the hundred years war to take the continent. The first 70 years, from founding to the Civil War, the goal was to ethnically cleanse all the territory east of the Mississippi, generating dozens of wars of aggression and expulsion against the southern Indigenous nations, marked by three declared wars against the Seminole nation in Florida, where they gave refuge to enslaved Africans who escaped. With the Indigenous survivors forcibly relocated to Indian Territory (Oklahoma), the US invaded and occupied Mexico, taking the northern half, thereby US territory reached its Pacific Coast limit…

The same officers who led those two decades of genocidal war headed the troops that were sent to conquer Spanish-held territories in the Pacific and Caribbean. Genocidal tendency is baked into the US armed forces, particularly the Army and Marines.

US foreign interventions into non-European countries throughout the 20th century and continuing in the 21st are essentially ‘Indian wars,’ wars of erasure and chaos, dismantling local and national institutions, creating dependency, particularly food. Active duty lifers and veterans of these foreign interventions are prominently represented among white nationalists and gun hoarders. There is is close correlation between multiple gun ownership and military service.

An overwhelming response to the latest shootings is to demand greater ‘protection’ from the US state (more funding for an increasingly militarised security and surveillance state). But if US gun legislation is inseparable from a legacy of violent state-sanctioned terror, how can this be a satisfactory response, and how can US society resolve its unhealthy relationship with guns?

Yes, the solution is said to be ‘more good guys with guns,’ more militarized police forces, further developing fortress America. However, the mass shootings are used opportunistically for that agenda. Tragic as mass shootings are, the deaths incurred make up only 1% of US gun deaths each year, while 3/4 of gun deaths are suicides. The easy availability of guns makes what might otherwise be an attempted suicide a certain death. Likewise, deaths that result from domestic violence and road rage are soaring with guns in cars and homes.

One place to begin resolving the problem is for leaders and professionals of good will to acknowledge that mental illness is not the cause of gun violence; rather ‘the need’ to possess firearms, many of them, is itself a form of mental illness, paranoia. The late historian Richard Hofstadter wrote of ‘the paranoid style in American politics’ (1964). He had his finger on the pulse of the rising white paranoiac response to the Black freedom movement. The majority of the white younger generation embraced the anti-racist struggle, but a significant minority of white men in particular panicked and reproduced their paranoia in the following generations, fused with virulent anti-communism and homophobia, often couched in Christian evangelism, coming to dominate national politics.

In fact, this white minority owns the US origin story and carries it forward. As long as the measure of civic patriotism is based on the founding narrative and militaristic fetishism, guns will play a central role in US society, and no laws will be enacted to any effect.

A key facet of ethnic cleansing is to cleanse the historical record of the act itself. An honest account of the white supremacy that runs throughout US history, then, could offer a real solution to the country’s broken relationship with guns.

For all those who find ‘thoughts’ and ‘prayers’ an insufficient solution to US mass shootings, Dunbar-Ortiz’s work is essential reading.