US desire to remain a superpower ended key nuclear treaty, and may lead to war with China - Canary 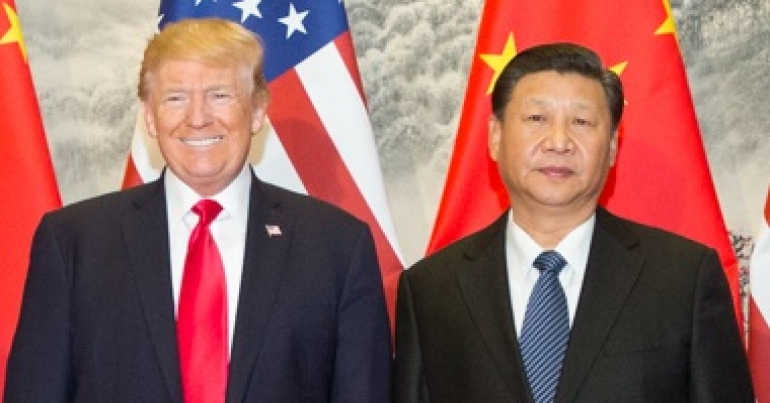 This is Part Two of an analysis of the US withdrawal from the Intermediate-Range Nuclear Forces (INF) Treaty with Russia. Part One focuses on US-Russian relations.

On 2 August, the US formally withdrew from the landmark INF Treaty, in a move blasted as “idiotic” and “dangerous” by former US colonel Lawrence Wilkerson. Speaking exclusively to The Canary, the national security expert explained that “both parties are guilty of provocative policies”, but he emphasised that “no one has been more provocative than Washington”. Less discussed, however, is the role that US attempts to contain China may have played in the decision to leave the INF Treaty. This ‘containment’ policy, with the objective of maintaining “US primacy in Asia”, may ultimately lead to open military conflict between the two states – and their allies.

US wants missiles in Asia-Pacific “sooner rather than later”

In 2018, Mathew Kroenig (a former adviser to right-wing senator Marco Rubio) wrote that ending the INF was “necessary” and “prudent” in order to “restore a favourable military balance”. The senior fellow at the hawkish Atlantic Council explained that the US achieves this “balance” by deploying “large numbers of US ground-based and mobile conventional missiles” across ‘allied’ countries in Asia. John Bolton, the US national security adviser and “serial arms control killer“, recently echoed this view; as did new US defence secretary Mark Esper. Only one day after the end of the INF, Esper told reporters that the Department of Defense (DoD) would like to deploy medium-range missiles “sooner rather than later”.

The above deployment would be an incredibly provocative act. And that seems to be the message China is getting. According to Dr Tong Zhao, experts in China see the US withdrawal from the INF as a reflection of this period of “greater hostility” towards the world’s second largest economy. As such, they interpret the US termination of the INF as “an official declaration of an all-out military competition with and containment against China”.

China “will not stand idly by”

Fu Cong, the director general of the department of arms control and disarmament of China’s Ministry of Foreign Affairs, recently told a press gathering:

China will not stand idly by and will be forced to take counter measures if the U.S. deploys intermediate-range ground-based missiles in this part of the world.

US deployment of intermediate land-based missiles would create significant financial and political costs, as well as an increased risk of an expensive arms race, while placing host countries under increased threat of a Chinese missile strike (whether deliberate or accidental).

A 2015 “grand strategy” document, published by the highly influential US Council on Foreign Relations (CFR) thinktank, explicitly stated that US policy towards China must be aimed at maintaining the US position “at the apex of the global hierarchy”. It also calls for ensuring “US primacy in Asia”.

This report, entitled Revising U.S. Grand Strategy Toward China, is as frank an admission as one may ever find of the desire to perpetuate the US as a global imperial power.

As The Canary previously reported, the CFR is so influential that former secretary of state Hillary Clinton once essentially admitted that the CFR dictates US foreign policy thinking. Historian Laurence H. Shoup, meanwhile, described the CFR as Wall Street’s thinktank – an organisation designed by and for the US capitalist class. He characterised it as “the most powerful private organisation in the United States – and therefore in world history”.

The answer is to “widen” the INF Treaty, not to “abrogate” it

Former US colonel Lawrence Wilkerson told The Canary that part of the US decision to withdraw from the INF Treaty “makes sense”, saying:

The INF Treaty does not include China—so this argument goes—so China is able to build and deploy INF weapons with no restrictions. This is a valid argument…

However, he continued by insisting that:

the right answer is not to abrogate the INF Treaty but to widen it to include other nuclear weapon capable states.

But it’s unclear how an improved INF could arise given Washington’s current “grand strategy toward China”.

When The Canary asked Wilkerson about his view of the CFR report, he accepted that there are those who seek “US global hegemony at all costs”. But despite that, he said there is “no inevitability about a U.S.-China hot war”.

He pointed to the policies of previous Republican administrations, where secretary of state Colin Powell (whom he worked with), sought to “help China become and maintain itself as a responsible regional and global power”. He said such policies “still make sense” compared to war with China, which “makes no sense”. However, the latter would be “understandable” because:

the Military-Industrial Complex salivates at the prospect of profits and the so-called defense experts are right there with them.

We need a new international framework

Wilkerson told The Canary that “a new, more modern, more encompassing nuclear arms control regime is necessary”. Such a treaty “should include all nuclear weapon states” including “Pakistan and Israel”.

The problem is that, at least for now, the Chinese government has repeatedly stated that it has “no interest” in joining a ‘widened’ INF-style Treaty. Fu Cong made this abundantly clear on 8 August. He told reporters that China “sticks to the policy of no first use of nuclear weapons” and has “exercised maximum restraint” in respect of nuclear weapons development. He also said:

Given the huge gap between nuclear arsenal of China and those of the U.S. and the Russian Federation, I do not think it is reasonable or even fair to expect China to participate in any nuclear reduction negotiations at this stage. It’s a consensus view of the international community that being the biggest possessors of nuclear weapons, the U.S. and the Russian Federation bear special and primary responsibilities on nuclear disarmament.

Cong then emphasised that, by cutting their “huge nuclear arsenals”, the US and Russia would “create conditions for other countries to participate in this process”. In short, don’t expect the Chinese to agree to cut out key missile defence systems while Russia and the US retain over 91% of the world’s nukes.

191 states have joined the Non-Proliferation of Nuclear Weapons Treaty (NPT), including the US, Russia, China, France, and the UK. The NPT contemplates the abolition of all nuclear weapons which Wilkerson described as “the very best situation”. However, he also predicted that total abolition won’t “happen any time soon, unfortunately”. So in the meantime, he concluded, “the fewest possible [nuclear weapons] should be the realistic goal”.