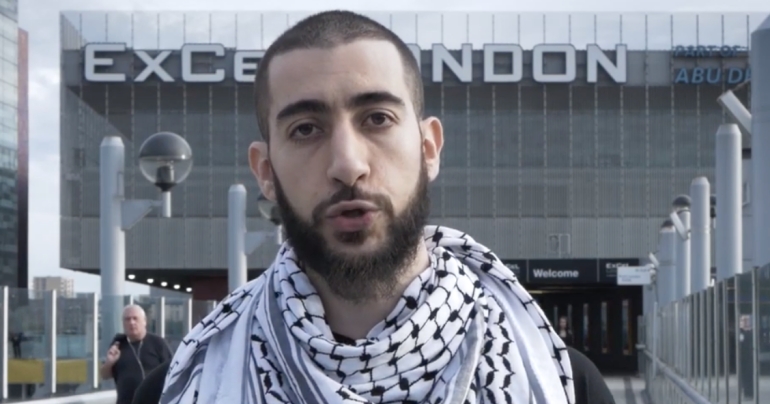 One of the world’s largest arms fairs is taking place in London this September. Protests are planned and people are getting ready to shut it down before it even begins.

Defence and Security Equipment International (DSEI) takes place every two years at the ExCeL centre. It describes itself as:

Now, conscious rapper and poet Potent Whisper has released a video that exposes exactly why all of us need to shut down DSEI for good. The video, produced in collaboration with War on Want, the Palestine Solidarity Campaign, and Campaign Against Arms Trade (CAAT), can be seen here:

Rhyming Guide to the Arms Fair

From the anti-gentrification anthem Brixton First to his collection of spoken-word Rhyming Guides to…, Whisper is known for his ability and artistry in mixing politics with music and words. And his Rhyming Guide to the Arms Fair is no exception.

He begins the piece by setting out what happens at DSEI:

To governments and armies from all around the world

They travel here to London where the fair is held

Repressive regimes, among the most violent

The UK government formally invites them

To wine them, dine them, tell them that they like them

Anything to sell them weapons, anything to bribe them

He also points out the sheer hypocrisy of the government’s support of the arms trade, highlighting that:

Black boys with knives are getting sent down for life

But bombs, tanks and warships, we can sell them openly

Like Saudi Arabia who are known for breeding terror

DSEI 2019 is already surrounded in controversy. Because the government has invited a delegation from Saudi Arabia despite a Court of Appeal ruling that arms sales to the regime are “irrational and therefore unlawful”.

“Business is booming and BAE is getting rich”

People die in our names and politicians benefit

Business is booming and BAE is getting rich

Get a grip: if we supply terrorists, we’re terrorists!

We’re accessories to murder, just so companies can get rich

How can we defend this?

He then makes an appeal to all of us:

Come, we’ll shut the arms fair and dash them off the guest list!

We can and we must shut DSEI down. A week of protest is planned with a range of actions from 2 September. Stop DSEI set out some of the things that happened the last time the arms fair came to town:

Whisper’s video eloquently shows why this is the case. We can stop DSEI opening on 10 September by putting our bodies in the way and making sure the equipment needed to market this trade in death and destruction can’t get to the ExCeL centre in the first place.