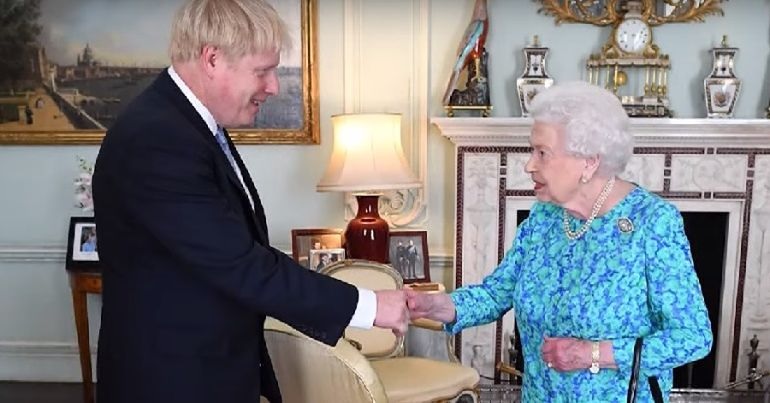 By moving to suspend parliament, the UK’s unelected prime minister Boris Johnson is making a mockery of the country’s global posturing about ‘democracy’.

One journalist summed this up perfectly, saying:

Boris Johnson unlike @NicolasMaduro has never been elected to lead any country & as he was bout to be removed by ELECTED MPs, he ran to an unelected monarch & begged her to suspend parliament

Yet according to MSM #Venezuela is a 'dictatorship' & the U.K is a healthy democracy 🤷🏿‍♂️ pic.twitter.com/Dt9kbLKwtu

Indeed, Boris Johnson’s coup highlights just how undemocratic the UK’s system is. And numerous commentators have tweeted to that effect:

The PM ‘asks’ the Queen to prorogue parliament, and the Queen does as she’s told. No independence, no impartiality.

Let’s not pretend the monarchy defends democracy or acts as any check on power. The monarch isn’t impartial, she is always in the PM’s pocket.

This sort of constitutional abuse is made much easier by the fact that large parts of our constitution are based on convention, and the powers of our head of state are de facto vested in the prime minister. We need a codified constitution & an elected HoS https://t.co/KRowv30p0M

Johnson's prorogation is not an aberration, it's a consequence of Britain's flawed democracy, argues oDUK editor @AdamRamsay. pic.twitter.com/B1MKTnVCyR

Democracy should be extended to every aspect of society: to our communities, to our public institutions, and most of all, to the workplace. But the idea that shutting Parliament down is a democratic act is ludicrous. (2/5)

The Canary has long reported on Britain’s desperate need for electoral reform, particularly on the fight to change the anti-democratic ‘first-past-the-post’ voting system. The unelected House of Lords and monarchy also come to mind.

But Boris Johnson was never going to be the politician to bring change. Because he’s one of many politicians with a terrible track record on supporting democracy – both at home and abroad. He has been all but silent, for example, about the ongoing descent into authoritarianism of major NATO ally Turkey – and in particular its alleged war crimes against the Kurdish people. There’s also his (and his party’s) close relationship with the brutal and extremist dictatorship of Saudi Arabia. And the list goes on and on.

The UK’s global posturing about ‘democracy’ is bull

As Ahmed Kaballo pointed out in his tweet, Venezuela has been just one of the targets for British posturing about democracy abroad. Following presidential elections in the country in 2018, for example, Johnson (then UK foreign secretary) alleged that the process had “further eroded Venezuelan democracy” and was “deeply flawed”. International election observers on the ground disagreed. But Johnson still used his claim as a basis to make the case for sanctions.

Venezuela’s government didn’t stop the opposition from voting in 2018. Most of the opposition simply chose not to participate. And out of over 20.5 million registered voters, only 6.2 million voted to re-elect President Nicolás Maduro. That means only 30% of Venezuelans decided to go out and vote for him. Hardly the kind of victory you’d expect from a ‘sham’ election. The low turnout (around 46%), however, gave fuel to an intensifying media bombardment which paved the way for the US-led coup attempt that began at the start of 2019. This followed on from almost two decades of Western hostility to the increasing independence and social reforms of Venezuela’s elected left-of-centre government.

The 2018 vote in Venezuela, meanwhile, actually reflected the ‘democratic’ norm in many countries around the world. For example:

And the list goes on. Yet there’s little uproar about the democratic deficit in these countries.

Hopefully, though, Boris Johnson’s current assault on Britain’s fragile democracy will encourage much more debate about just what kind of democracy we want going forward.