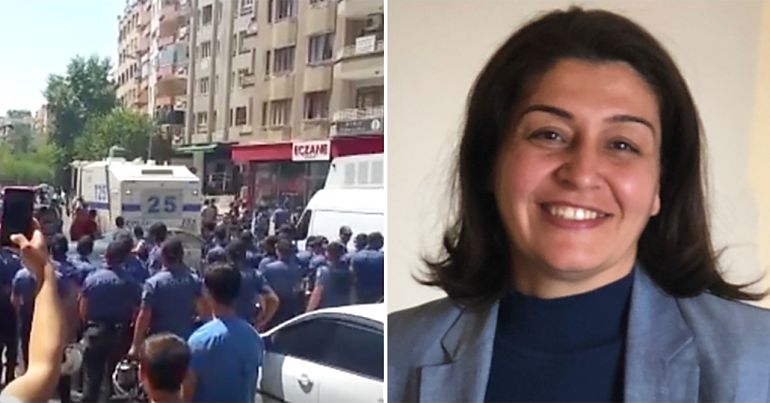 Turkey, a NATO member, has launched a coup against democratically elected Kurdish mayors in three areas. Mayors in Amed (Diyarbakir), Van and Mardin were removed from office during raids in 29 places. The raids also resulted in the arrests of 418 people.

The mayors will be replaced by kayyums (‘trustees’), controlled by president Recep Tayyip Erdoğan‘s AKP party.

As The Canary previously reported, local elections were held across Turkey on 31 March. Erdoğan suffered a massive defeat, losing the previous AKP strongholds of Istanbul and Ankara.

Following an attempted coup in 2016, Erdoğan seized control of municipalities. He then replaced 100 mayors with AKP kayyums. The Canary was told that 94 of these mayors were from the left-wing HDP (Peoples’ Democratic Party). A large number of elected mayors, including all those from the big Kurdish cities, were imprisoned. But across the Kurdish regions, the HDP won back municipalities in the elections.

Now, Erdoğan has struck back at three of those Kurdish cities.

Although the Kurdish mayors have been in power for nearly five months, it only took five days for Erdoğan to launch investigations into the mayors in Amed.

The HDP runs a system of co-mayors. This system guarantees equal gender representation, as one of the co-mayors is always a woman. The two mayors elected in Amed are Adnan Selçuk Mızraklı and Hülya Alökmen.

A statement at the time from the HDP said that:

The two have been accused of ‘terrorism’ for celebrating the HDP’s election victory in Diyarbakir.

Unfortunately, the Government of Turkey has already begun to take legal proceedings against democratically elected HDP officials. The HDP received 62.93% of the vote in Diyarbakir, a majority-Kurdish city and center of Kurdish politics and civil society in Turkey.

In April, Alökmen told The Canary:

If they learnt their lesson, the kayyums shouldn’t come. But they have a plan that they won’t let us actively work. Nearly most of the activities that municipalities conduct, they have changed the rules and given the power to the central government – employing new people and making rules.

But it seems the state hasn’t learned its lesson. And the plans and rule changes weren’t enough to satisfy Erdoğan’s power grab.

People took to the streets to protest the coup. In Amed, police reacted violently before a planned HDP press conference, attacking people with water cannons and causing injuries. Other HDP protests in Istanbul were also met with violence and arrests.

Raise your voice everywhere, bring life to a standstill. Ours is a struggle for law and justice. Reclaim your will and future. We are on the streets today…We will tear down fascism and will definitely free this country. We will definitively win.

In a separate incident, the police attacked people outside the HDP office in Amed:

Aided and abetted by the UK government

All the attacks on democracy and Kurdish people in Turkey are aided and abetted by the UK government through arms sales. Since 2016, the UK has sold Turkey over $1bn worth of weapons. In May 2017, Theresa May and BAE Systems sealed a £100m contract to help Turkey develop fighter jets and improve trade relations. And Rolls Royce partnered with Turkish firm Kale in 2017 to build the engines for its fighter jets.

In fact, the government lists Turkey as one of its “priority markets” for arms sales. The Turkish army is NATO’s second largest. And the government has also officially invited Turkey to attend Defence Security and Equipment International (DSEI) – one of the world’s largest arms fairs – which is taking place in London in September.

Silence is not an option

Appointing trustees to municipalities is a new, blatant coup and a hostile stand. The Ministry of Interior Affairs is the undertaker of robbing people of rights and freedoms, of provocations, and of decisions and practices that don’t leave behind a shred of democracy. The ministry is a center for coups.

This is not an issue for only the HDP and the Kurdish people.

This is a common issue for all peoples of Turkey, all Kurdistani parties and all forces of democracy.

It also promised that:

we state that we won’t remain silent in the face of injustice and unlawfulness..

And it called for:

all progressive sections of society and the democratic public to take a clear stand.

Silence should not be an option in Turkey or across the world. We can all speak out about what is happening by supporting the Boycott Turkey campaign, protesting the arms trade, and making sure that Erdoğan knows he cannot act without the world watching.