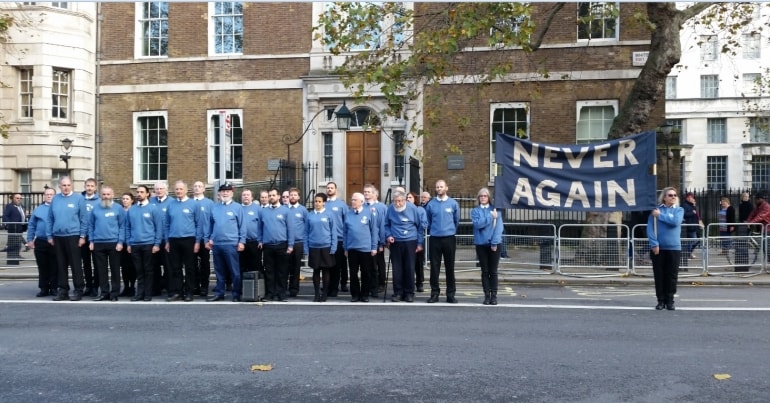 Veterans for Peace UK (VfP UK) commemorated the lives lost through war on Remembrance Sunday at the Cenotaph war memorial in London on 10 November 2019.

The Canary was in attendance as approximately two dozen VfP UK members marched down Whitehall towards the Cenotaph, on a crisp cold day with a bright blue sky. Behind the VfP UK members were supporters and family members slowly following them while keeping a respectful distance.

The Canary understands that the BBC does not typically broadcast the VfP UK march to the Cenotaph, although it immediately follows that of the Salvation Army.

Upon arriving at the Cenotaph, VfP UK member Ben Griffin placed a handmade wreath, mostly of white poppies, with two red ones, onto the memorial. The wreath had the phrase “Never Again” in big bold letters at the centre. The Co-operative Women’s Guild first produced the white poppies in 1933. According to the Peace Pledge Union (PPU), the Guild was largely made up of “women who had lost husbands, fathers, sons, brothers and friends in World War One”. They were “worried by the growing militarisation of Remembrance events and the detachment between the red poppy and the need to work for peace”.

Last year, a military veteran and conscientious objector from Germany placed the wreath on behalf of VfP UK.

According to the PPU, at the same time that The Canary was at the Cenotaph, “around 100 people from many walks of life, including armed forces veterans, attended the national Alternative Remembrance Ceremony in London’s Tavistock Square”, while many others “sent messages of support”.

In front of the procession, two VfP UK members also carried a large banner with the words “Never Again” on it. VfP UK told The Canary that it has been 100 years since the first time commemorators displayed a banner with those words during Remembrance.

A VfP member recited the poem “Suicide in the Trenches”. This was followed by a folk song rendition of 1916 by VfP UK member Jim Radford. 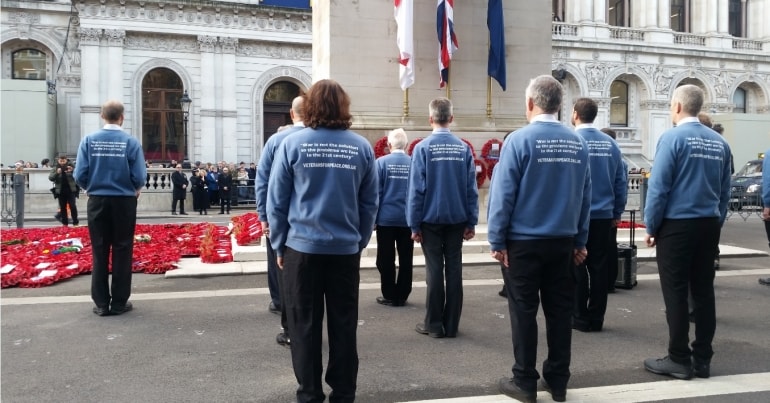 The experience of the VfP UK procession is quite different from all those of the various military units which immediately proceeded, in that its focus was clearly on loss rather than on pride or accomplishment.

D-Day veteran: back in the day, Remembrance ‘wasn’t about glorification, but about mourning the dead’

Radford was present at the D-Day invasion of Normandy, France. The Canary asked him why he chose to march on the Cenotaph with VfP UK.

I used to come to the Cenotaph with the normal veterans. And I stopped going after a while because… it’s been taken over by the bloody monarchy, the politicians, and the church. It’s got fuck all to do with the church and the politicians. I’ve come back with Veterans for Peace because I want to reclaim it. Initially, when I was a kid, at 11 o’clock everyone would stand in silence for a minute, wherever you were. People would get out of their cars and stand.

He continued explaining that:

It wasn’t about glorification – it wasn’t about honouring the military; it was about mourning the dead. The basic commitment was on the banner. ‘Never again’. And everybody knew that in the [19]30s. Now, they use it to promote the military ethos, pride in the [armed forces], and that’s all bollocks. This was a monstrous, terrible event – should never have been repeated. It has been repeated.

VfP has written a series of articles explaining the significance of the phrase “Never Again” to its members.

wasn’t about pride. It was about mourning, it was about regret, it was about sadness. It’s not that people shouldn’t take pride in courage and heroism – of course they should. But mass slaughter like I saw in D-Day, that’s something to mourn, regret, pledge yourself to prevent. That’s what VfP is about.