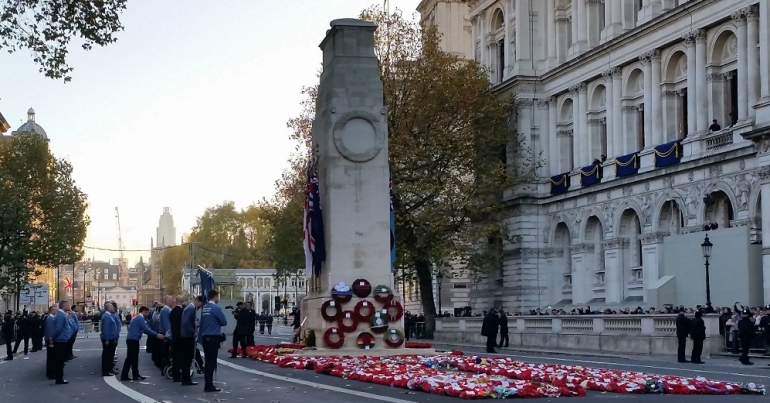 The Canary attended the final processions on Remembrance Sunday 2018, following Veterans for Peace UK (VfP) and its supporters as they marked 100 years since the end of the First World War. As VfP told The Canary, the British Legion sees the processions as ‘for members of the British and commonwealth militaries only’. But in a symbolic stand for peace and international solidarity, VfP chose a German military veteran to lay down a wreath at the Cenotaph in London on its behalf.

The 60 ex-service men and women in attendance with VfP came from 11 different countries. The oldest member in attendance was a WWII veteran. VfP’s Ben Griffin told The Canary that its “oldest members are in their 90s, with one gentlemen who served on D-Day”. And the youngest VfP members have “recently served in Afghanistan and Iraq”.

The message of our organisation is that war is not the solution to the problems that we face in the 21st century.

He concluded by saying that they laid a wreath of red and white poppies:

In memory of all those killed in war. So that’s British and commonwealth dead, enemy dead, but also all of the civilians killed in war too.

“A world without enemies”

The German soldier who laid down the VfP wreath is Major Florian Pfaff. Pfaff refused to “carry out a military order in connection with the Iraq War” on the basis that it was an illegal war of aggression. A German court ruled in Pfaff’s favour, but the military forced him to retire regardless. Griffin told The Canary:

We chose Florian, a German veteran, because we thought it symbolised our wish for a world without enemies.

Another German soldier, Jurgen Rose, came as a show of solidarity with VfP and “the idea of remembrance for the war victims and peace on Earth”.

Rose, a retired airforce colonel, told The Canary he refused to provide technical support for Tornado Aircraft sent to Afghanistan in 2007 because:

the Tornado aircraft was not only for the ISAF mission, which was within international law…, but… also supported Operation Enduring Freedom [OEF – the invasion of Afghanistan]. And the OEF was – is – the private war declared by George W. Bush to the rest of the world. And I didn’t want to support that because it was just illegal.

“Being active for Never Again”

Conan Connolly, meanwhile, who served in Ireland’s military, told The Canary that:

Peace needs me to [be here today]. I hated the British for a long time.

A lot of my countrymen fought with them during the First World War and a lot of others fought against them.

Given the current climate with what’s going on, I wanted to show my solidarity with the peace movement and British veterans.

When The Canary asked what remembrance meant to him, he replied:

Being active for ‘Never Again’.

On what was a largely crystal clear day, the VfP procession and their supporters were the final group of ex-service personnel to make their way to the cenotaph. The Salvation Army procession was the second to last procession of the day.

VfP has written a series of articles explaining the significance of the phrase “Never Again” to its members.

We should not underestimate the commitment and bravery it takes to refuse to fight or to speak out after participating in war. Especially when the entire structure of Remembrance Day almost seems designed to celebrate the military rather than commemorate the bloodshed and agony that military actions bring. VfP previously told The Canary that: “some veterans in VFP UK see the Remembrance as a way of deflecting from the tragedy of wars we have fought this century”. In fact, at around the same time as the cenotaph procession, hundreds of people took part in an alternative ceremony which The Canary also covered.  The alternative ceremony commemorates all victims of war.

– Watch this Reel News video report of the event.

–  Also watch the new film War School (while it is still free online) or arrange/attend a screening thereafter.

– Read about how British military veterans were threatened with arrest for handing out VfP leaflets during Armed Forces Day.