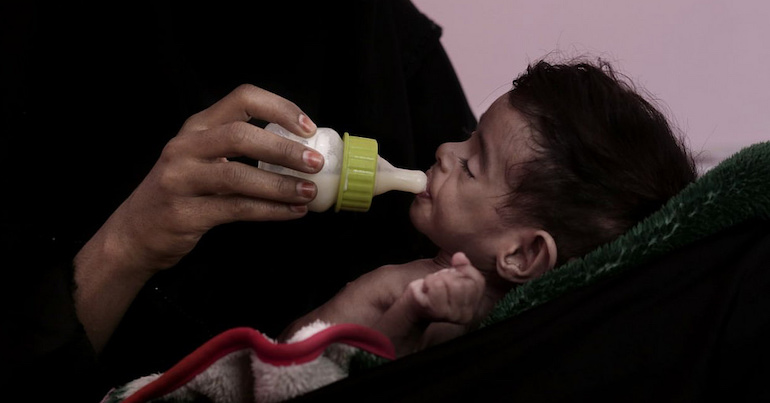 A new report has revealed that European countries’ arms sales to Saudi Arabia and its coalition allies in the United Arab Emirates total “more than 55 times” their donations to humanitarian aid in Yemen.

Saudi Arabia has been leading an assault on Yemen since 2015. Eight million people are now on “the brink of famine”. And the UN has warned this may rise to over 12 million.

“The arms trade fuels the need for aid assistance”

A report from Middle East Eye (MEE) calculated that European countries “approved the sale of more than $86.7bn in arms to Saudi Arabia and the United Arab Emirates” in 2015 and 2016. It also stated that the arms licences:

amount to more than 55 times what the EU and European countries have donated to the UN’s chronically underfunded Yemen Humanitarian Response Plan.

Over 56,000 Yemenis have reportedly died so far in what the UN has called the “world’s worst humanitarian crisis”. But there still appears to have been no attempt to regulate arms sales. As Italian economist Loretta Napoleoni told MEE:

The arms trade is unregulated because the largest manufacturers (the USA, UK, Russia, France) all sit on the UN Security Council, so why would they go against their own business?

The reality is the provision of arms extends conflicts and leads to humanitarian disasters, so to an extent the arms trade fuels the need for aid assistance. It’s a perverse cycle.

“The UK is taking sides in the conflict”

Ben Donaldson, head of campaigns at the United Nations Association-UK, told MEE that “the UK is taking sides in the conflict”. He also said that the UK and EU allies:

insist there is no military solution to the conflict, yet they themselves are supplying the weapons that are fuelling and prolonging the hostilities.

According to Campaign Against Arms Trade (CAAT), the UK has licensed £4.7bn of arms to the Saudi dictatorship since 2015. These arms range from helicopters and drones to armoured vehicles and tanks. In 2016, the UK government admitted that British-made cluster bombs had been deployed in the conflict.

In August, Saudi-led forces dropped foreign-made arms on a bus of Yemeni schoolchildren. And their airstrikes have faced accusations of “deliberately attacking civilians and infrastructure in rebel-held areas”.