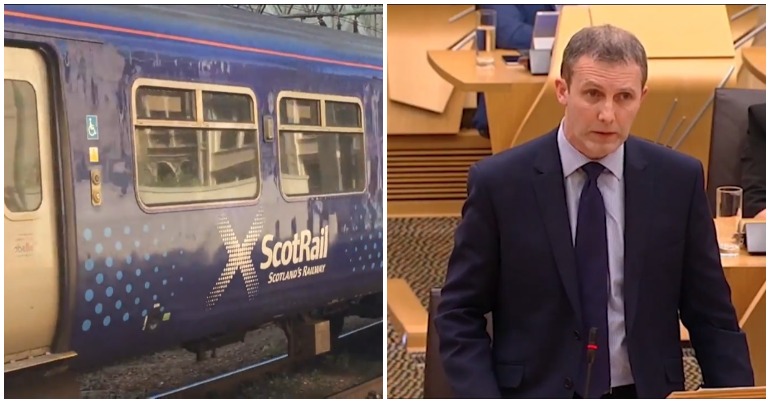 MSPs will vote in the Scottish Parliament on whether ScotRail should continue to be operated by Abellio. The vote comes after continued criticism of the operator’s performance and low satisfaction rates. Abellio has been operating ScotRail since 2015. Scottish Labour will bring forward the motion on Wednesday 14 November.

If MSPs vote to scrap the current franchise deal, it could open the door to the Scottish government making a public bid. This would result in the renationalisation of ScotRail. As reported by the Scotsman in December 2016, this would reflect the public mood of supporting rationalisation.

The vote in Holyrood could signal the end for Abellio and see a new public operator in place by 2022. However, the first official notice to strip Abellio of the franchise can be served in 2020.

Passengers are fed up with overcrowded, overpriced and late running trains.

It’s time to hit the brakes on privatisation and bring our railways back into public ownership. The SNP claimed that the Abellio contract would be a world leading deal – instead the government has shifted the goal posts on targets and given the franchise a licence to fail.

For years the Nationalists have said they would work up a public sector bid, but that promise appears further behind schedule than the average train journey in Scotland. If the SNP was serious about a public sector bid it would be ready to step in at the first opportunity to end the franchise.

On Wednesday Labour will make the case to end the franchise at the first opportunity, and accelerate the process for public ownership.

“Performance is not where it should be”

A Scottish government spokesperson said on the matter:

We know performance is not where it should be – that is why ministers can and do hold Abellio ScotRail to account within the terms of the franchise agreement. This includes the ability to end the contract if its terms are not met and it is in the public interest to do so.

The Scottish Parliament received the devolved powers to put in a public bid for ScotRail under the Scotland Act 2016.

Meanwhile, the Scottish Green Party is likely to support Labour’s motion. But to command a majority, it will require the SNP or the Scottish Conservatives to back the move.

It is suspected that both the SNP and the Tories will vote the motion down.