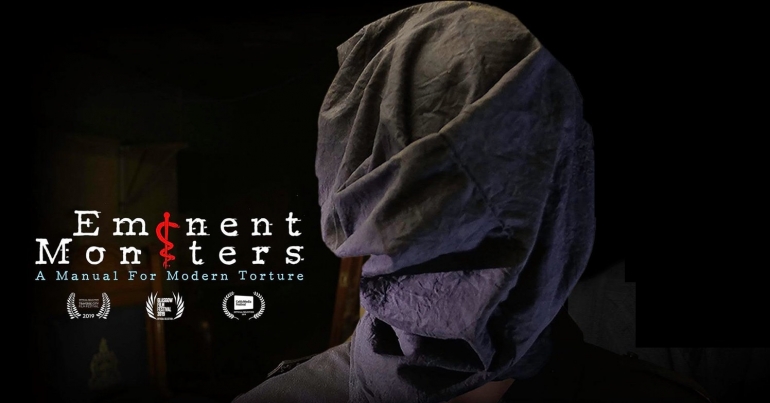 CORRECTION: This article originally stated that the American Psychological Association (APA) collaborated with the CIA and US military “to help torture detainees” in Guantanamo. At 8.10pm on 13 May, we corrected the article; it now states that the collaboration “ensured that no APA policy interfered with psychologists’ participation in the ‘enhanced interrogation’ of detainees in Guantanamo”. We also added an acknowledgement of APA’s 2015 policy change, and mentioned the limitations of the new policy.

“For the last 60 years doctors working for the British and American governments have used psychological torture to destroy people”. So begins Eminent Monsters, a chilling new documentary about the development and application of “psychological torture” techniques which have been, and continue to be, used by the UK and US governments as well as others around the world.

The Canary attended the UK premier at the Bertha DocHouse, on the bottom floor of the Curzon Theatre at the Brunswick Centre in London, on 16 February 2020. In the film, the director Stephen Bennett takes the viewer on a decades long journey which begins with eminent Scottish psychiatrist Dr Ewen Cameron and his experiments in sensory deprivation and sensory overload which he subjected many of his own psychiatric patients to, against their will, and as part of a secret CIA funded programme known as MK Ultra.

Cameron’s patients were forced to wear goggles; had headphones placed on their ears while various sounds, phrases, and sentences were repeated for hours on end; with their arms were forcibly encased in tubes so that they could not use their hands, even scratch themselves (*viewers are advised the enactments are at times disturbing and some scenes contain flashing images). If this sounds familiar, it should, as these techniques exploded into the wider public consciousness after the attacks of 11 September 2001. In particular, many of these torture techniques became publicly known as organisations like WikiLeaks started to reveal what the US was subjecting its detainees in Iraq, Afghanistan, and Guantanamo Bay Cuba to.

Those familiar with the “the Hooded Men” in the north of Ireland who were beaten, forced into stress positions for hours on end, and subjected to sensory overload and sensory deprivation in the 1970s, by forces backed and trained by the British military, will also be familiar with the techniques developed from Cameron’s research. The story of the Hooded Men also features prominently and is told from the point of view of the survivors and their legal team.

As Amnesty International explain, in addition to beatings and threats of murder made against the hooded men by their captors, they were also subjected to the following five techniques:

These techniques stem directly from Cameron’s work as the film makes painfully clear. The depravity of Cameron’s actions are particularly ironic given the fact that he participated in evaluating Nazi war criminals at Nuremberg, and would later write about the necessity of socially re-engineering German society after the war.

“The first ones to actually systematically experiment with [psychological torture] were the Nazis in the Dachau concentration camp”, UN torture expert Nils Melzer told the audience during the post-film Q&A at the Bertha DocHouse. Melzer sought to dispel the impression that “psychological torture is somehow torture light” by explaining that the Nazis introduced their programme because they “couldn’t break” resistance fighters in the Auschwitz concentration camp using ‘normal’ means of physical torture.

Melzer also said that billions of pounds have been spent worldwide over the decades to develop methods of torture that will “not leave marks” and will actually “erase the personality of the victim”.

With a combination of dramatic re-enactments; interviews with torture survivors and their families, medical experts, and former government officials; and readings from the medical notes of Cameron, Bennett takes the viewer on an immersive and at times painful journey. The journey charts the development of psychological torture techniques from a now abandoned facility in Canada, to its implementation by British military-trained Royal Ulster Constabulary on Irish civilians, to its use against detainees in Guantanamo Bay by the US military.

Amazingly, not one person involved in applying any of these torture techniques, or any of the medical professionals involved in crafting and directing them, has ever been held accountable. Although, as Melzer noted, CIA whistleblower John Kiriako was prosecuted following his revelations that the spy agency used waterboarding.

The film is especially timely given that UN torture expert Nils Melzer has – along with two other medical experts – concluded that WikLeaks founder Julian Assange shows the symptoms of being psychologically tortured.

“The really important elephant in the room here is impunity”, Melzer told The Canary.

We’ve had impunity for all these torture programmes that are documented in the film and because of this consolidated impunity it is not possible for a country like the UK to expose someone like Assange, who is just a journalist, who has just done his lawful work, to ill treatment in order to intimidate the rest of the world.

Complicity from the medical profession did not stop with Cameron. Even some leaders of the highly influential American Psychological Association (APA) collaborated with the CIA and the US military to ensure that no APA policy interfered with psychologists’ participation in the “enhanced interrogation” (ie torture) of detainees in the Guantanamo military base on US-occupied Cuba, or at CIA black sites. The battle to keep the APA out of the torture business is, shockingly, still not over despite the laudable activism of many of its members, as psychologist Steven Reisner explains in the documentary. APA changed its policy after a public outcry in 2015 to “prohibit psychologists from participating in national security interrogations”. But in 2018, its then president communicated to the military that there would be no repercussions for psychologists violating that policy.

Bennett, who was inspired to make the film after reading Naomi Klein’s The Shock Doctrine, said he has been trying to make the film “unsuccessfully” for 13 years. But he has now finished this decade and a half long project, and it’s certainly been worth it. Bennett has successfully illustrated what happens when state power remains unchecked and accountability is in short supply. Part Taxi to The Dark Side and part Touching the Void the film does not disappoint and deserves to be viewed far and wide.

Mezler informed the audience that the film (which he’d already seen in 2019) inspired him to draft a report on psychological torture for the UN. He’s due to present this report to the UN’s human rights council in Geneva on 28 February.

BBC Scotland, Creative Scotland and the National Lottery financed the film, and HopScotch Films produced it, which means it should be broadcast on TV and via BBC IPlayer in due course. If you can’t wait, check out one of the screening dates here.

"If you want to understand what governments have been doing in your name, go and watch #EminentMonsters"

Eminent Monsters is essential viewing for anyone who wants to have a better understanding of the state of our ‘democracies’ and what happens to any society when they dispense with the rule of law.