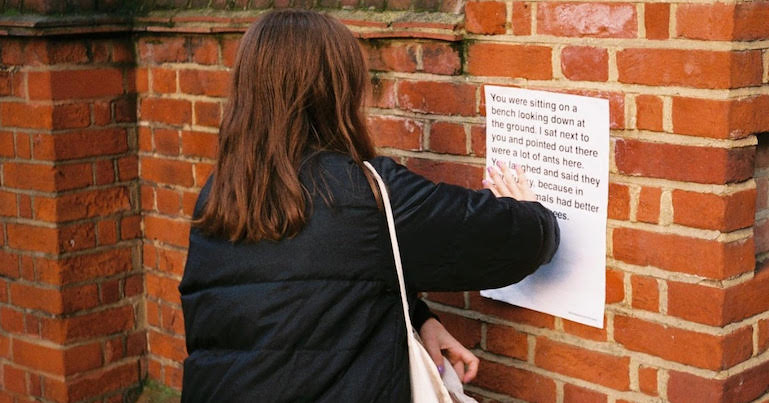 Conversations From Calais is an important new project that re-humanises those affected by the refugee crisis. A series of posters depicts narratives between refugees and volunteers in Calais. These break down ongoing stereotypes and show the true diversity of experiences for those forced to flee their home countries.

What also makes this project unique is that the posters invite active participation. The aim is to print them out and cover cities and towns around the world. In just a few weeks, posters have already “travelled to more than sixty cities in five different continents”.

According to a 2019 report from the UNHCR, there are currently “70.8 million forcibly displaced people worldwide”. But despite these numbers, coverage of the crisis has faded from establishment media. As one refugee said:

The world got bored with refugees in 2016. Politicians wanted to stop refugees coming. Islamophobia and the problems that happened ‘because’ of the refugees – fascists used these things in a bad way.

Mathilda, who runs Conversations from Calais, told The Canary that it uses “public space to share conversations volunteers have had with refugees met in Calais”. What’s so powerful is that:

It’s a way of bearing witness for the thousands of displaced people stuck in Calais and trying to reach the UK, whose voices are so often silenced or ignored. This ever-growing collection of conversations focuses on capturing the diversity of experiences and avoids creating new stereotypes of refugees as villains, heroic figures or hopeless victims.

By pasting these posters on walls all around the world, we are taking over public space, commemorating these voices and inspiring social change. 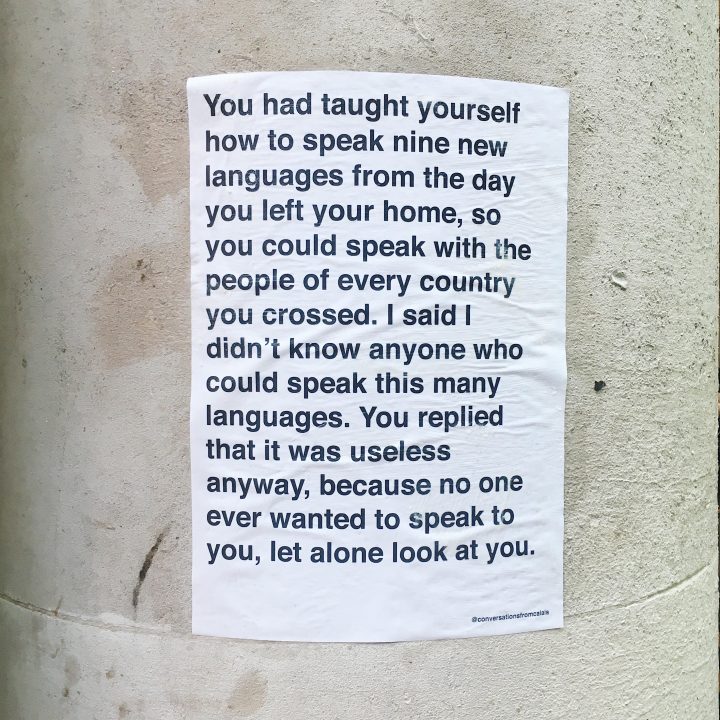 Mathilda felt inspired to start the project after “volunteering in Calais for various organisations on and off for a year and a half”. She felt compelled to take action. She told The Canary that after each trip she:

felt the need to share what I see, hear and experience there. I felt so angry about how refugees were portrayed in the media, especially when arriving in the UK from Northern France. I wanted…to break away from how people were portrayed in mainstream media by remembering, documenting and commemorating banal but intimate and relatable conversations.

“I’ve also always been so inspired,” Mathilda said, “by how so many grass-root organisations have managed to help so many displaced people living in Calais”. She continued:

that really motivated [me] to start this project. I couldn’t really sit here in silence any longer. 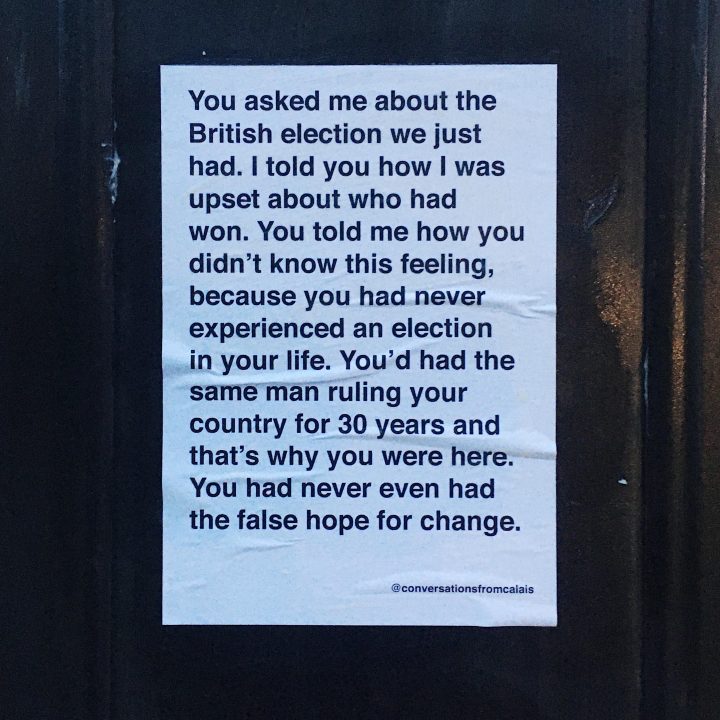 “Removing the separation between ‘us and them’”

As “an illustrator and graphic designer”, when Mathilda started volunteering in Calais, she found she “was always writing and drawing moments from the day or snippets of conversations” with people she met. One striking thing about the posters is the way they’re framed using “you” and a second person narrative. It places the viewer right in the heart of the story.

Mathilda told The Canary that “a few weeks ago” she found her sketchbooks and “noticed I was already writing conversations in that style, using the second-person narrative”. So this always felt like the “most natural” way to frame the posters. As she explained, using her notebooks to write the posters, she positioned herself:

as an insider and representing my voice (the volunteer) in first person and the anonymous refugees in second-person felt the most natural again because that is how the conversations happened in real life. I think it’s effective because as a reader… it really puts you at the centre of the encounter. Making these conversations feel personal goes back to wanting to humanise people and removing the separation between ‘us and them’. 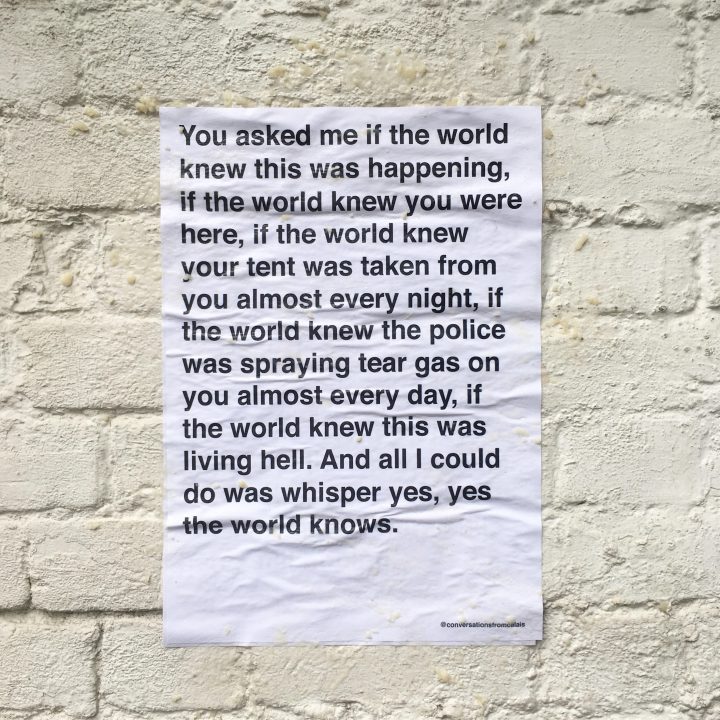 The posters “have now travelled to more than sixty cities in five different continents”. Mathilda said she “still can’t believe” it and “never ever thought this would happen!”.

The posters are free to download from the website. This means that Mathilda doesn’t always “know where they end up or how they are received” once pasted. She gains some sense of “their impact” through Instagram.  As she also said:

Someone recently commented on a post saying “Keep telling these stories. We will not ever not read them.”, that really touched me. Since the small impact I can make one individual at a time, really motivates me to keep going.

The project invites people to share images of the posters in different towns and cities. There’s also a call for volunteers to submit their stories.

“Living as a displaced person”

As Mathilda explained, the ongoing situation in Calais means we’ve already seen “the extremely negative physical and psychological impact” for people living there. She continued:

Living as a displaced person in the world is never easy, whether that’s in Calais or in other refugee camps.. However, from what I’ve heard and seen, there is so much hostility in Northern France, which makes it one of the hardest places to live for people trying to reach the UK. There is no space or time for communities to be built there, which [is] usually what happens in other camps.

In 2016, police destroyed the so-called Calais Jungle camp. This was “one of the largest refugee camps in Europe, with 10,000 people at its peak”. But removing the Jungle didn’t end the crisis, and those people forced to head there face ongoing hostility from officials and police. Mathilda explained:

constant police evictions… happen almost every day. People get all of their belongings taken and have to find a new place to settle down… Calais is such a transitional place for people to live as no one wants to stay there,

But this also means it’s increasingly “difficult for organisations to help in building a sense of community”. This all creates an “extremely negative impact” for refugees in Calais.

These posters serve as a powerful reminder that everyone there is an individual with a unique and powerful story.

One of my favourite aspects of this project is that it is open to collaboration and the way it has developed is influenced by people reaching out and taking different initiatives.

Looking ahead, she’d “love to be able to put these conversations up on billboards around the UK”. She’d also “really like to give talks and workshops in schools or other educational settings”. Not only would this create opportunities “to tell people about the project” but it could also create “a new narrative” around migration and the refugee crisis.

The website also makes a powerful call for people to be “kind”, “open”, “political”, “active”, and “generous” in responding to the refugee crisis. We may look on and feel rage, hurt, and a sense of frustration about the situation. But these posters offer a powerful and simple way to remind people that we won’t sit in silence. We can all share these posters, break down the stereotypes, and play a small role in trying to re-humanise refugee voices in our communities.

Featured image and all other images via Conversations from Calais, used with permission