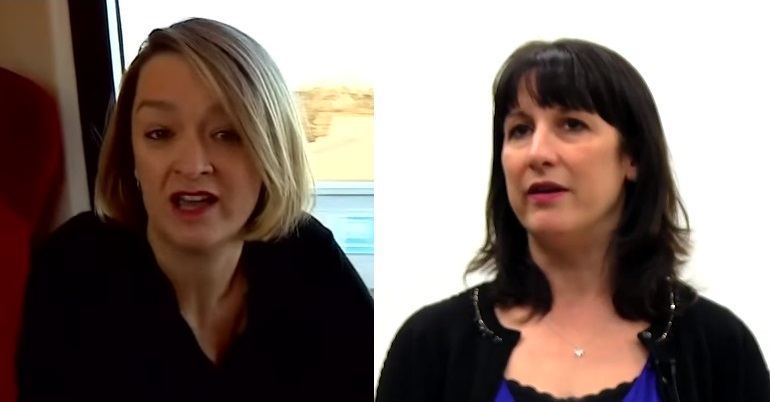 Laura Kuenssberg and centrists spent 24 February celebrating a rabid antisemite. The racist idol in question was Nancy Astor, one of the UK’s early female MPs.

The celebrations by these figures are not, however, being attacked on the media’s front pages. They would be, of course, if they were initiated by Jeremy Corbyn. If anyone needed more proof that the regular attacks on the Labour leader for alleged antisemitism were anything other than part of a cynical smear campaign, this is it.

Rachel Reeves is an MP on the right of the Labour Party. She posted a long thread on 24 February which championed Astor on the 100-year anniversary of her first speech in parliament:

#OTD one hundred years ago, the first speech by a woman in the House of Commons was given by Nancy Astor, MP for Plymouth Sutton between 1919–45. (1/7) pic.twitter.com/WlDyfuipol

But as well as being known for her foray into politics, Astor is well known for her repulsive views on Jewish people. She reportedly once said at a lunch provided by a Jewish family:

Did I not after all believe there must be something in the Jews themselves that had bought them persecution throughout all the ages?

She also allegedly wrote to US ambassador Joseph P Kennedy, referring to Jewish people as the “killers of Christ” and Adolf Hitler’s treatment of them as him giving Jews “a rough time”. Astor said that it would take more than this ‘rough time’ to inspire support from her for an “Armageddon to save them”. And she referred to communists and Jewish people as “world problems”.

In short, she was a virulent antisemite. But Reeves didn’t mention that in her celebratory thread. Nor did Kuenssberg point it out while retweeting. Others, however, certainly did:

Nancy Astor was a fan of Hitler & notorious anti-Semite, @bbclaurak , nicknamed ‘The Member for Berlin’.

I don’t know which is more worrying:the idea a senior journalist WOULDN’T know this or that she possibly DOES https://t.co/X9o4jd8fHa

It seriously does not take a lot to recognise her place in history (as our second female MP) whilst also condemning her critical support for Nazisim.

I'm not sure it's appropriate to be lauding a woman who was an anti-Semite and friend of fascists!

In late 2019, former PM Theresa May unveiled a statue of Astor, which current PM Boris Johnson gladly visited himself.

Now imagine if Corbyn had praised a figure in history for their work who also happened to hold antisemitic views. Actually, there’s no imagination needed. Because the press has crucified the Labour leader over exactly that situation before.

In 2011, Corbyn wrote a foreword for a reissued book that was first published in 1902. Corbyn wrote that Imperialism, A Study, by John Atkinson Hobson, was “very controversial” and “brilliant”. However, the book contained antisemitic sentiments and Corbyn’s opponents went ballistic in 2019 over the discovery of this foreword. The Guardian‘s resident Corbyn-hater Jonathan Freedland wrote a story headlined:

Corbyn stressed that his foreword looked at the book’s focus (“the process which led to the first world war”) rather than the author’s “absolutely deplorable” language.

Perhaps Freedland will write a seething column in the Guardian nailing Kuenssberg for not caring about antisemitism. Perhaps he’ll note Reeves’s ‘blindness’ to prejudice. Or perhaps not – since he himself has championed Astor before, in a programme called Pioneering Women.

Perhaps, actually, the furore over Corbyn’s foreword was just a part of the smear campaign against him – and many of those screaming about any alleged prejudice of the lifelong anti-racist should really be looking in the mirror.