In a powerful new video protesting against extreme laws, Muslim women say ‘hands off our hijabs' - The Canary 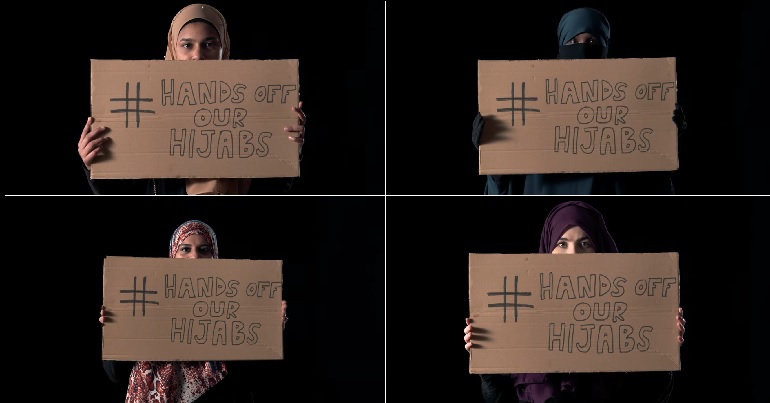 In the wake of a huge legal victory against police, civil rights organisation CAGE is launching a social media awareness campaign to support Muslim women. The campaign intends to highlight the harmful effects of ‘Schedule 7’, a draconian detention measure introduced in the Terrorism Act 2000. It also aims to show solidarity with visibly Muslim women who are at greater risk of profiling.

Stories of women affected by Schedule 7

‘Asiyah’, who recently won her case against the police, said:

Being forced to remove my Hijab was the most dehumanising and embarrassing experience of my life. I was made to feel worthless. I felt that my honour had been violated. Schedule 7 is a horrifying experience for a young woman like myself. The fact that the police can behave in such a way without any repercussions is frightening.

It wasn’t easy challenging the Police, but with the help of CAGE and my lawyers, I was given the moral support to continue this case, so that no Muslim women should ever have to face this same violation.

Summayah, a Muslim woman who also had her hijab removed during a Schedule 7 stop, described her experience for The Canary:

I was returning from Turkey … when I was stopped at Gatwick Airport. I am also chronically ill. My feet had swelled up and I was having difficulty breathing during the flight, yet I was still mistreated by the officers who stopped me.

The Border Police removed me from the disabled cart and placed me in a glass room in view of everyone. Despite having incontinence, I wasn’t allowed to use the toilet without supervision. I was forced to suppress myself.

The officers threatened me that I would be arrested and detained longer if I filmed the interrogation. I wasn’t aware of my rights and the police took full advantage, coercing me to give my DNA, fingerprints, and then the final blow was asking me to remove my Hijab. By that point I had been interrogated for over an hour. I felt sick, like I was going to pass out.

They threatened me with arrest if I didn’t comply and remove my Hijab, so they could take pictures. I felt so dehumanised.

This has had a very complex impact on my mental health and life. I was already diagnosed with PTSD [post-traumatic stress disorder]. This made it worse. I now live in constant fear and paranoia.

Solicitor Anne McMurdie, who represented Asiyah, said it’s “concerning that there is no guidance” for when police can compel a woman they’re detaining under the Terrorism Act to take off her hijab. She said this causes an improper use of powers, where:

women have been photographed unlawfully without their hijab against their wishes and their photograph has been retained, perhaps indefinitely, on a police database.

Muhammad Rabbani, director of CAGE, has said “the Police knew they were discriminating against Muslim women”. He believes the police chose to settle outside of court “in order to avoid Asiyah’s case setting a [legal] precedent for other women that have had their hijab forcibly removed“. And he insisted that ‘it’s high time Schedule 7 was scrapped’, adding that:

Coercing Muslim women to remove their headscarves at Schedule 7, despite not being suspected of any wrongdoing, is a shocking violation with far reaching psychological impact. These revelations are evidence of the Islamophobic nature of Schedule 7 powers and why we’ve consistently called for their repeal.

CAGE has launched the campaign #HandsOffOurHijabs with a powerful video featuring Muslim women:

Take off your hijab!

These are the words some Muslim women are told when stopped at the UK border while travelling.

It's humiliating and Islamophobic.

📝End #Schedule7. 30k have signed our petition, have you? >> https://t.co/w3uoJTNrGF pic.twitter.com/uzZRl0cwDh

Naila Ahmed, casework manager at CAGE, spoke to The Canary about why the organisation decided to launch this campaign. She said:

We felt that it’s a really important issue to highlight. It resonates deeply with Muslim women especially. After the legal victory, Asiyah felt like she had this case and she won but no one knew about it.

We are aware that it’s not always legally that you can make a change. We needed to make our community and other Muslims aware of this win, so if other women are faced with the same request by police, they know their rights and know that it is a violation of human rights to remove it.

Leanne Mohammed, who wrote an exclusive poem for this campaign, said:

My motivation to write this poem was sparked by my frustration upon hearing the stories of innocent Muslim women who endured the violations of Schedule 7. The reality is that their experience could have been any of us. Nobody should have to go through this Islamophobic, discriminatory and humiliating law. We must have the courage to challenge this.

Shahina, who took part in the video, said of her reasons for taking part:

I travel a lot and I have felt intimidated during checks in airports, especially when I am selected to be thoroughly checked as the only hijabi in the queue. This is now getting out of hand and I need to stand up with my sisters so this does not happen again.

Ahmed said they want to use this campaign to raise the issue with the All-Party Parliamentary Group (APPG) on British Muslims:

Part of our campaign was intended to encourage the APPG on British Muslims to look into the effects of Schedule 7. Islamophobia isn’t just ripping the hijab off Muslim women in the streets, but also the hijab being removed by the police.

She added that this is “institutional Islamophobia and we must challenge it”.

The APPG on British Muslims has a mandate to investigate Islamophobia. Following this case and the testimonies that we’ve made public, the APPG must take immediate steps to investigate the Home Office over its discriminatory operation of Schedule 7 powers.

CAGE is encouraging everyone to support the campaign and show solidarity with Muslim women. People can also use the hashtag #HandsOffOurHijabs to share their experiences with counter-terrorism police stops. With draconian state powers on the rise right now, it’s more important than ever that we hold the government to account.