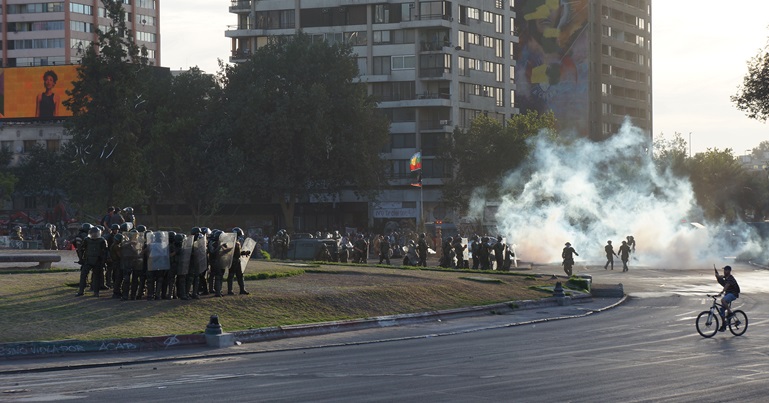 Chile has had a turbulent few months. And at the end of April, a dozen people were shot from an unmarked car in one of Santiago’s most populated suburbs, La Florida, during a peaceful protest. This was not an isolated incident. Violence against students and protesters by anonymous attackers has been escalating since social unrest began last October, as Chileans fed up with inequality took to the street en masse to protest.

Nelson Duque Jara, a 21-year-old student from Santiago, was participating in a peaceful march when he was shot in the leg from an unmarked car last December. He told The Canary:

The vehicle had no licence plate and dark windows. There were five people inside and the driver had a pistol.

The police were not present after I was shot. I did not have contact with them. I reported it to the district attorney’s office, not the police nor the Police Investigations Department.

It’s a question of trust because I don’t really know who shot me, who they are, or what they do. I preferred at the time to not report it to them [the police]. At the march, they acted very violently, indiscriminately firing tear gas cannisters.

For the first month after the incident I was afraid. I did not publish anything on social media. At the time it happened, these sorts of complaints were going viral, but through fear I kept it to myself and it worked because it was kept quiet. It did not appear on Instagram etc. I was afraid. The attack was politically motivated because I was at a march.

Since the incident, I have been out to protest a couple of times, but it took a while to walk properly and for my leg to heal. I stayed home for around two months. I was anxious. But once I stepped out again, I lost my fear quickly. I had lost my trust in everything, but slowly it dissipated.

I really do not know who shot me. Was it the police or security forces? I have no idea. I have reported it but so far have heard nothing back.

Chilean students have historically borne the brunt of state violence. Last November, a police major shot two students during a protest. Gustavo Gatica, the student who has become one of Chile’s symbols for the uprising, lost both eyes when tear gas canisters were fired directly into his face. He is one of over 400 young people that have been maimed by Chile’s security forces.

Students have been at the vanguard of social action and protests against Chile’s cruel neoliberal policies and often rise up to become leaders. They are therefore prime targets for repression.

A human rights observer who asked to remain anonymous for fear of reprisal told The Canary:

We were observing a student walkout in Puente Alto on 5 March 2020 when we saw a group of men from the council building following the student protesters. The students gathered outside the council building and began shouting slogans. Then a group of men dressed in black came out of the building and began attacking the students. We began shouting and ran towards them with our Human Rights Observer IDs. They ran back into the building. We know they work for the council because we recognised them. I was afraid then and I’m still afraid.

As the government of Chilean president Sebastián Piñera increases military powers, citing coronavirus as the reason for imposing strict curfews at night, it seems human rights violations will continue in a systematic manner as protesters vow to continue pushing for social change in Chile. The targeting and intimation of students who protest, meanwhile, is just one of an array of repressive measures designed to breed terror in the population.