As Gerry Adams’ internment conviction is 'quashed', Britain's shameful past in Ireland comes back to haunt it - The Canary 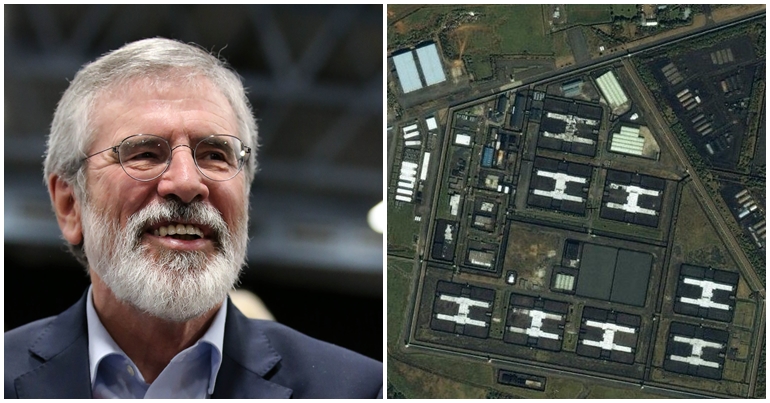 On 13 May, the Supreme Court quashed the 1973 and 1975 convictions of former leader of Sinn Féin (SF) Gerry Adams. The court held that because Adams “was not detained lawfully” it “follows that he was wrongfully convicted of the offences of attempting to escape from lawful custody”. This means “his convictions for those offences must be quashed”.

The floodgates of similar cases could be about to open. Once again, the world will be reminded of Britain’s shameful past in Ireland. And despite over twenty years of relative peace, its past is not yet at rest.

Internment in the north of Ireland meant the arrest and detention of people suspected of being in a paramilitary organisation. The British government introduced it following pressure from unionist politicians. It arrested people through the use of “an interim custody order (ICO)”. The secretary of state for Northern Ireland created the ICO if they believed a person had an involvement in terrorism. They then interned that person.

The validity of the ICO that was used to intern Adams was at stake in this case. Because [P. 3]:

And if the secretary of state hadn’t “considered the matter [Adams’ internment] personally”, it would raise serious questions over its validity.

The secretary of state at the time was conservative MP William Whitelaw. The Supreme Court considered whether the task of personally considering every ICO would be “unduly onerous” for Whitelaw. But it found no evidence that it was so onerous. Because just eight months later, his successor Labour MP Merlyn Rees was able to mange do so personally.

In its discussion, the Supreme Court highlighted the seriousness of internment powers when it stated:

The provision did nothing less than give the Secretary of State the task of deciding whether an individual should remain at liberty or be kept in custody, quite possibly for an indefinite period. …This was, after all, a power to detain without trial and potentially for a limitless period.

This underlined “that the intention was that such a crucial decision should be made by the Secretary of State”.

The outcome of Adams’ case could result in several hundred other similar cases. And it places internment centre-stage once again. It also reminds people of the “torture centres…special courts” and “no courts at all” that sent people to prison without a trial. It will furthermore remind people that the British introduced internment the year before the bloodiest year of the 30-year conflict.

The Canary spoke to legal representatives of some of those Adams’ case could affect. Niall Ó Murchú, legacy lawyer with human rights law firm Kinnear and Co solicitors, said:

since the Adams judgement we have taken instructions from a considerable number of ex-prisoners in relation to the matter and we anticipate that some of those men will have cases to bring forward.

But it could be a race against time to get justice. A number of ex-prisoners have died or have cancer related illnesses. These illnesses were possibly caused by the chemicals used to clean their cells or the alleged use of Dibenzoxazepine to crush prison rioting in 1974.

The Supreme Court judgment in the Gerry Adams case is very significant and has the potential to impact on many of our cases. We are currently reviewing hundreds of Interim Custody Orders we have in our possession to ascertain if the Adams judgment has any bearing on their case.

However, the judgment has wider implications than those ICO’s that don’t bear the signature of the relevant British Secretary of State. There is the question of whether personal consideration was given by the Secretary of State, regardless of whether the document is signed or not. I don’t see how we can resolve that issue without some verification from the authorities. We will be writing to the Crown Solicitors Office on that issue and we may need to issue proceedings in each case if we don’t get a satisfactory response.

There is also the additional question of those who were convicted of offences whilst interned. For example, we have been [contacted] by a number of former internees who were charged and sentenced in relation to the attempted escape from Long Kesh which led to the death of Hugh Coney. If any of those former internees were unlawfully interned if will follow, according to the Adams judgment, that their convictions should be quashed. We could see many more cases before the Court of Appeal as a result of this judgment also.

Our office has been inundated with queries from former internees since the judgment, many of whom were interned during the tenure of William Whitelaw and are naturally curious as to whether they have a legal case.

The Canary contacted the Northern Ireland Office (NIO) for comment but had not received a response by the time of publication.

As reported by The Canary, the British government detained 1,981 people in the north of Ireland between August 1971 and December 1975. 1,874 of these were from an Irish republican, nationalist, or Catholic background. Gerry Adams was one of them. This latest court ruling puts the British government’s “brutal practice” of internment from the 1970s back centre-stage.

Internment without trial was an abuse of the most basic human rights. The conditions in which prisoners were kept were inhumane. And while it happened nearly 50 years ago, Adams’ case shows the UK’s past in Ireland could be with us for some time. Now it’s back in the modern-day – front and centre – and there’s no running away from it.