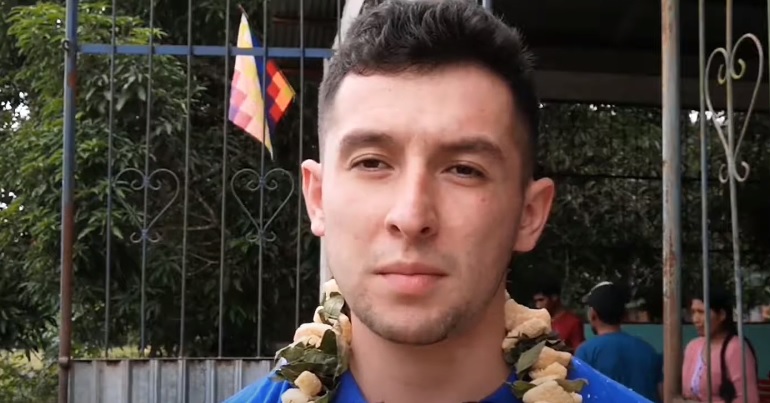 The Canary interviewed the journalist Ollie Vargas on 14 August about the recent developments in Bolivia. A US-backed coup forced out Bolivia’s socialist and indigenous president Evo Morales in November 2019. Jeanine Añez took over as interim leader, a right-wing Christian who has presided over a violent crackdown on protest, supporters of Morales’ Movement Toward Socialism (MAS) party, and adversarial journalism.

Bolivians have recently engaged in massive protests and a general strike to demand the return of democracy and sovereignty.

Ollie, who are you working for and how is your coverage of the situation in Bolivia funded?

Well, I am working at a radio station in Bolivia called Radio Kawsachun Coca. From there, we launched an English language page called Kawsachun News from the Tropico de Cochabamba, which is the bastion of the Movement Toward Socialism. And the radio is funded by tiny regular donations from local campesinos farmers.

For a while now, I haven’t received any income from the radio. My only income has been the Patreon we set up for Kawsachun News which is a small amount. And I earn where I can – writing articles, commission articles when there’s time.

Could you please describe the situation on the ground?

It’s an incredibly complicated situation in Bolivia now. For the past 12 days, the country has been in the middle of an uprising against the coup government. That has meant that in every region, every department of the country, the unions – workers’ unions, rural campesino unions – called their members to block the roads across the country, so therefore paralysing the country. And that has been going since Monday last week. However… the MAS, the Movement Toward Socialism, in the legislature managed to pass a law that guarantees that elections cannot be delayed further than October 18th, and that requires the state to give the proper budget for those elections to be held.

And now the executive, the president, has signed that law. And that’s an important victory because the regime was planning to delay the elections even further, indefinitely. And they are doing this by not giving the right amount of… funding to the electoral authorities to be able to hold the elections. So this has been a victory of the social movements, of the general strike, of the uprising that has been for nearly two weeks.

However, the situation is complicated by the fact that not all of the movement on the ground is part of the Movement Toward Socialism. Particularly in the department of La Paz, the city of El Alto, the rural areas of La Paz, those movements have condemned the Movement Toward Socialism for negotiating this law and they say that they will protest and mobilise until the government has been overthrown.

So there is clearly a divide within the movement. The movement’s shown itself incredibly powerful by the fact that they have mobilised across the entire country and brought the entire country to a standstill in every region, in every department. However, there is a very real divide between those social movements around the Movement Toward Socialism who want a peaceful route out of the current crisis, of the current dictatorship and, on the other hand, radical sections who want to overthrow the state through force. And the next couple of days will be key for seeing if that more radical movement has any momentum or not.

What do you make of this law? What prevents the government from simply disregarding it and blaming it on the pandemic?

Well, in this law, it states clearly that the date can no longer be moved – that’s something that didn’t exist in the former election laws – and that anyone who tries to postpone the election date can or will be tried in a court of law for violating that law. That’s not to say that the government won’t try to ignore that law. This law was drawn up with the backing of the UN.

So that’s been the approach of the majority of the social movements and of the Movement Toward Socialism. So this is the law and, if it’s disrespected, we will mobilise and that will be to overthrow the current government. But we must take this opportunity, take this one last opportunity to clear out the government by peaceful means in the ballot box rather than through violence.

What does the Movement Toward Socialism want apart from elections being held? Are there other, new demands, including Evo Morales returning, for example?

The Movement Toward Socialism and the rest of the movement has always demanded more than just elections. It has been about more than just elections. It’s been about the economic collapse the country has faced since the coup, the attempts to privatise key state industries, the paralysation of key state industries and scrapping big key development projects in Bolivia such as the project to industrialize lithium within the country, key infrastructure projects that had been built by Evo Morales but are being scrapped under the coup government as part of the austerity policies.

It is also against the gross mismanagement of the COVID-19 crisis. Bolivia’s public hospitals collapsed. Meanwhile, private clinics have been left to profit off the situation. The legislature has passed a law that would require private clinics to take in patients from the public hospitals where those public hospitals can’t manage. The president has refused to sign that law. That shows that the current coup government represents a very specific set of interests… the corporate interests, interests of the private clinic owners. And the people are protesting against that setup as well. It is also protesting against the climate of authoritarianism, of prosecution, of racism within the country, of anti-indigenous racism directly. So all of these issues have angered the population to the point at which they are mobilising now in the streets. Some sectors are calling for the immediate overthrow. Other sectors are calling for the overthrow through democratic, peaceful means which is at the ballot box.