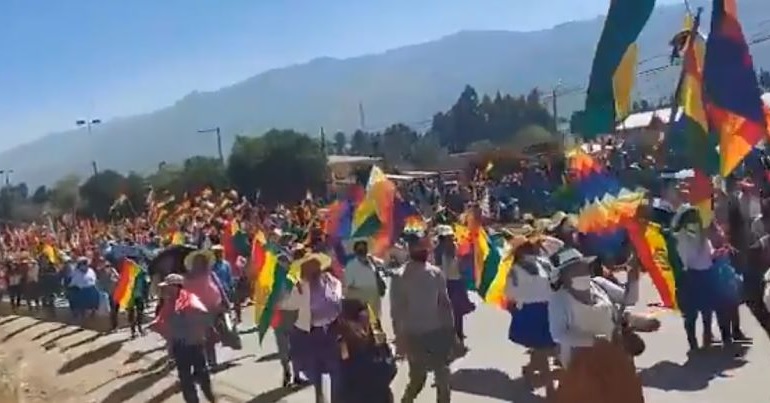 Bolivians are currently engaged in massive protests and a general strike. They are demanding the ‘return of democracy’ and sovereignty following a coup against their elected government in 2019. The temporary coup government recently delayed a planned election for 6 September, which it says is due to the coronavirus (Covid-19) pandemic. But Bolivians are rising up in response.

The US-backed coup forced out Bolivia’s socialist and indigenous president Evo Morales in November 2019. Citizens had re-elected Morales in October that year. According to journalist Ollie Vargas, a three-pronged coup took place in and around the election, involving fake news, bogus analysis claiming electoral fraud and, ultimately, the ousting of Morales by the military. Jeanine Añnz took over as interim leader, a right-wing Christian who has presided over a violent crackdown on protest, supporters of Morales’ Movement for Socialism [MAS] party, and adversarial journalism.

The country was meant to go to the polls in May. But authorities postponed that election on the same basis as the most recent delay, coronavirus. MAS argues that polls showing Añez currently trailing in third place as a preferred president could be behind the delay. Either way, many Bolivians have now had enough. Huge marches have recently taken place:

Bolivians marched today against the US-backed regime, past the Huayllani bridge, Sacaba, where the regime massacred anti-coup protesters on November 15th 2019. pic.twitter.com/pIbcSKIsiZ

The country’s biggest trade union federation, the Bolivian Workers’ Center (COB), laid down a 72-hour ultimatum to the authorities on 28 July: retract the election delay decision or face a general strike. The retraction did not materialise, so the general strike is now underway:

Day 4 of Bolivia's general strike: Today is the country's independence day and the labor unions have instructed workers and social movements to sing the national anthem at the roadblocks where Bolivians are protesting for democracy and national sovereignty, @OVargas52 reports. pic.twitter.com/vUSHWrVlNT

Road blockades are taking place as part of the action. Vargas reported that claims circulating about the blockades inhibiting the movement of coronavirus medical supplies are “false”. Protesters are temporarily moving to allow passage of medical vehicles through, he said:

Why are Bolivians blocking roads? Are ambulances and medical supplies allowed to pass through? pic.twitter.com/fKnDvNOBRR

One of the key demands of those taking action is the restoration of democracy. They want a democratic election to take place as planned. It’s by no means, however, the only demand. Some are calling for the immediate ousting or resignation of the coup regime:

NEW: The Indigenous 'Ponchos Rojos' groups of La Paz, Bolivia, say that their demand is no longer just elections, but also the immediate ousting of the entire coup regime. They say they're ready to lay siege to the seat of government. pic.twitter.com/OOIyaSR56n

Indigenous protesters from the Bolivian town of Palca, are now calling for the resignation of self-declared President Jeanine Añez, citing the destruction of education and health services. Video: teleSUR pic.twitter.com/VFv0mt9L6T

The matter of sovereignty is also central to the protesters’ cause. One of Morales’ major achievements while in government was to nationalise industries involving the country’s natural resources, ensuring those resources – and the income they generated – could benefit citizens rather than transnational corporations. Since assuming leadership, Añez has shown her regime to be a fan of such resources being in private, corporate hands.

In terms of natural resources, Bolivia is rich in one that’s increasingly highly valued: lithium. As Gaia Vince wrote in Adventures in the Anthropocene:

humanity’s quest for new low-carbon alternatives to fossil fuels will mean electrification of heating, lighting and transport, with vehicle fuel tanks replaced with batteries. The material for this lightweight high-density power source – lithium – will also need to be mined, and one of the few places in the world with supplies is Bolivia.

Vince explained that Bolivia’s Salar de Uyuni – a vast area of salt flats – is thought to hold “more than half of the world’s supply of lithium”. Under Morales, the country was on its way to industrialising this resource. It had a deal in place between the state lithium company YLB and Germany’s ACISA, in which the former had majority-control. But that fell apart amid the coup.

Morales firmly believes the country’s lithium resources played a part in the US-backed coup. In an interview with journalist Glenn Greenwald after his ousting, he said the coup wasn’t solely orchestrated by the “Bolivian oligarchy”. It was an “external conspiracy” too, he argued. He went on:

My crime, my sin, is to be an Indian. And to have nationalised our natural resources. … Transnational companies are behind the coup. The United States too because of the lithium issue

They don’t accept that Indians or social and worker movements can be the agents of our people’s liberation through lithium.

Vargas reported the temporary government “has already announced that they plan to invite numerous multinationals into the Salar de Uyuni”. He stated:

Añez’s VP candidate, Samuel Doria Medina, went as far as inviting Elon Musk (over Twitter) to come and exploit the Salar, and establish a lithium battery factory for Tesla cars. Elon Musk did not tweet back.

Musk may not have tweeted back to that. But he did recently ‘joke’ about the coup on Twitter when someone commented on the alleged link between it, the US and lithium, saying: “We will coup whoever we want! Deal with it.”

Unsurprisingly then, the Bolivian people’s sovereignty over the lithium in the country features heavily in the mobilisation:

Day 3 of Bolivia's general strike: More roadblocks are springing up and social movements in the Trópico say that defending lithium from privatization is a key a demand, @OVargas52 reports. pic.twitter.com/4yIbs97z3j

The campesino unions of Uyuni, Bolivia (where the lithium is based) formally reject the attempts by Elon Musk to take control of the natural resources of the region.

They also confirm that production at the state lithium plants has been suspended since the coup. pic.twitter.com/USjAqYv5A0

Musk may ‘joke’, but the coup is no laughing matter. For the Bolivian people, the stakes are extremely high. The progress Morales made on their sovereignty over the country’s natural resources, and the subsequent social progress that enabled, is on the line. So too is the people’s democratic right to vote.

The world should be standing behind them.